Get to know a little more about your conference opponent Iowa State, and its coach Fred Hoiberg.

Share All sharing options for: Fred Hoiberg and the Iowa State Basketball program

In January in Minneapolis, the cold hits you hard -- it just sucks the life out of you. It rips through your $250 Columbia parka like it isn't even there. The Vikings help the people of the city of lakes make it through the winter, but the Timberwolves seldom do; the Timberwolves are mostly a joke. The long cold winter of 2004 was one of the few high points for Minnesota hoops fans, or at least one of the few that many are old enough to remember. It had been 50 years since the Minneapolis Lakers, led by all time great George Mikan and Texas Longhorn Slater Martin, won the NBA title.

The 2003-2004 NBA season was easily the greatest in the history of the Minnesota Timberwolves. Led by franchise cornerstone and league MVP Kevin Garnett, and the newly acquired Sam Cassell and Latrell Sprewell, the Timberwolves won 58 games and advanced to the Western Conference finals before falling to the Los Angeles Lakers. One player on that team who was a little less famous was Fred Hoiberg. After four seasons in Indianapolis, and four in Chicago, Hoiberg ended up as a member of the rebuilt Timberwolves. Hoiberg was in Minneapolis to do one thing -- shoot the hell out of the basketball. And he did that, playing over 20 minutes a game and knocking down 44 percent of his three point shots. The following season, Hoiberg made 48 percent of his three point shots, as the Timberwolves fell apart.

Players who shoot like Hoiberg tend to stick around in the NBA for as long as they can keep making their shots. But for Hoiberg it didn't work out that way. During a routine physical, a doctor discovered an aortic root aneurism. I am not a medical doctor, but from what I can tell, if let untreated, this condition can cause your heart to explode. Hoiberg needed open heart surgery.

I had some setbacks during the surgery. I talked to the surgeon. He's done 150 of these surgeries. One time his patient had developed a heart block which required a Pacemaker. I was the second person that had to have a Pacemaker. I had developed 100-percent heart block. My heart doesn't beat on my own anymore. It's because of my Pacemaker that my heart beats right now, which is amazing to me that I’m able to be as active as I am and also almost make an attempt to come back and play in the NBA.

Iowa State basketball had finally hit its stride in the mid 1980s. In 1985, Johnny Orr took the Cyclones to their first NCAA tournament since 1944. There would be five more tournament trips under Orr. Orr retired in 1994 with 466 wins, 218 of which had come at Iowa State. He left his successor Tim Floyd with a strong program, led by rising senior Fred Hoiberg. Floyd would build on Orr's sucess, coaching four seasons in Ames before leaving for the NBA. Floyd won 63 percent of his games at Iowa State, and took the Cyclones to three NCAA tournaments, including one trip to the Sweet 16 in 1997. Three seasons later, Floyd's successor Larry Eustachy coached Iowa State to the Big 12 championship and the regional finals of the NCAA tournament. The 1999-2000 Cyclones, led by Marcus Fizer and Jamaal Tinsley, won 32 games, the highest total in school history.

Things started unravel on April 28, 2003, when the Des Moines Register published a photograph of Eustachy partying with college kids at the University of Missouri. Over the next several days, additional stories about Eustachy emerged. On May 6, Eustachy resigned.

''I don't think I'll ever be able to apologize enough. I have no excuses for my behavior.''

Eustachy's replacement, Wayne Morgan, only lasted three seasons at Iowa State before he was suddenly fired. Greg McDermott followed Morgan, coaching for four years before resigning in the spring of 2010. McDermott left for Creighton, where, as he told his Iowa State players, he would have the chance to coach his son(*). After burning through several coaches in a short period of time, Iowa State athletic director Jamie Pollard made an unconventional hire. He called in Fred Hoiberg, an Iowa State alumnus and Ames native, to replace McDermontt.

(*McDermontt's son has turned out to be a hell of a player.)

Pollard had made a bold move. It is rare to hand the keys of a major conference program to a man with essentially no coaching experience. Hoiberg's only time as a coach was the one season he spent as an assistant for the Timberwolves. I am hard pressed to come up with recent coaches who were hired with a resume this thin. Only Reggie Theus' short-lived stint at New Mexico Sate comes close; Theus' prior coaching experience was mostly confined to the television series Hang Time, although he did spend a couple of seasons as an assistant to Rick Pitino.

Fred Hoiberg's first season at Iowa State was an up and down ride. The 2010-2011 Cyclones started the season well, going 13-2 before the start of conference play, but this record was mostly an illusion created by a weak non-conference schedule. Once Big 12 play started, things got ugly. Hoiberg's team finished the Big 12 season going 3-13 in conference, and crapping out in the first round of the Big 12 tournament. Iowa State wasn't very good on offense, but where the Cyclones really struggled was on defense. They were the worst defense in the Big 12 in 2011, performing poorly in almost every defensive statistical category that matters.

It is hard to win in the first season after taking over a struggling program. Hoiberg had a plan to improve the Cyclones that was already underway. Hoiberg jump started this improvement process by bringing in talented transfers from other major conference programs, most notably Royce White, and recruiting well generally.

I don't think anyone should be surprised by Hoiberg's early success in attracting talented players to Iowa State. He is a personable guy who played in the NBA for a decade -- it is hard to imagine that combination not playing well with recruits. But given his lack of experience, there were certainly questions as to if he could coach, and after his first season, those questions remained.

There were a few inklings of Hoiberg's approach to basketball in that first winter in Ames. Hoiberg embraced the three point shot right away. This isn't surprising when you consider that the man was paid roughly ten million dollars over his lifetime to shoot them. In the 2011 conference season, the Cyclones attempted a higher proportion of their shots from three point range than any other team in the Big 12.

With the start of the 2011-2012 season, Iowa State was better situated to compete in the Big 12. The first wave of transfers -- Royce White, Chris Allen, Chris Babb, and Anthony Booker -- were eligible to play. With enough talent to compete, it became easier to understand what Hoiberg's vision for his team would be. On offense, Iowa State spaced the floor, protected the ball, and shot the three. The Cyclones took 43 percent of their field goal attempts during conference play from the three point line, with the result being one of the better offenses in the Big 12.

The improvement on defense was even more substantial. During Big 12 play, Hoiberg's team allowed 0.99 points per possession, which made the Cyclones the third best defense in the conference. The Cyclones' defense was good because they did a few things exceptionally well. The foundation of the Iowa State defense was to prevent penetration. In half court sets, opponents only took 17 percent of their initial shots of a possession at the rim. To put this number into context, Kansas, the best defense in the Big 12, allowed 23 percent of the initial shots of a possession to occur at the rim in half court situations(*).

(* Kansas did a much better job of defending the shots that occurred at the rim. Opponents made 54 percent of their shots against the rim against Kansas, while they made 73 percent of their shots at the rim against Iowa State. Of course, Kansas had the best shot blocker in the country, while Iowa State's interior defense was one if its biggest weaknesses.)

The image below was captured from Iowa State's victory over Kansas last season. Iowa State is on defense, in the white jerseys. The Kansas player with the ball is labeled in the photograph. The four off-ball defenders for Iowa State are all collapsing towards the paint, which makes penetration difficult. In many ways, the Iowa State defense is similar to the Pack Line, although there does seem to be a difference. In the handful of clips of the Iowa State defense that I have looked at closely, the Cyclones are not forcing ball handlers towards the center of the court. 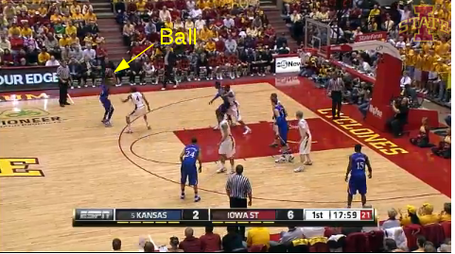 Preventing penetration sets a team up for success. Shots taken at the rim go in almost twice as often as shots taken anywhere else on the court, so limiting these shots is a good thing. Preventing penetration also helps with rebounding. Missed shots taken at the rim are more likely to be rebounded by the offense, when compared with jump shots. Rotating to help pick up a penetrating guard takes interior defenders out of rebounding position -- this is a big reason why Pack Line teams tend to rebound better than everyone else. With only infrequent penetration into the lane, Royce White and Melvin Ejim could focus on controlling the defensive glass. Iowa State led the Big 12 in defensive rebounding percentage, pulling down 74 percent of the available rebounds while on the floor. Additionally, by limiting penetration, Iowa State also was able to avoid putting its opponents at the free throw line. During conference play, the Cyclones' opponents shot 0.26 free throws for every field goal attempt, the lowest rate in the conference.

What does the future hold for Fred Hoiberg, and the Iowa State basketball program? There now appears to be much more talent in the Iowa State program than there has been in the recent past. Iowa State loses Royce White, one of the best players in the Big 12, as well as sharpshooters Chris Allen and Scott Christopherson. But the Cyclones return what could be the core of a very good team, and will still be able to flood the floor with guys who can shoot from long range.

Hoiberg returns many key upperclassmen from last season. Chris Babb is a really good defender who can hit the outside shot. Tyrus McGee is another dangerous outside shooter. Without White, Anthony Booker, a 6-9 forward with a three point shot, should play more this year. Rounding out the key returning players are inside players Melvin Ejim and Percy Gibson. I like Ejim a lot -- he is the type of active rebounder who can create extra points for his team on the glass. I haven't seen enough of Gibson yet to have much of an opinion of him, but in limited minutes he was 40-45 on shot attempts at the rim, suggesting he is a capable finisher.

There are also several talented newcomers. Most notable is Michigan State transfer Korie Lucious, who becomes eligible to play this year. Despite being nearly a foot shorter and weighing 100 pounds less, Lucious will likely take the Royce White role of breaking down the defense while the three point shooters space the floor. Another promising newcomer is the versatile 6-7 freshman Georges Niang, yet another inside/outside threat who in time could become a real handful with a coach who has shown the ability to use skilled forwards.

Iowa State has the talent to play in the Big 12. And Hoiberg is committed to what he wants to do, and knows how to implement it. Will this be enough for Iowa State to continue to compete with the top teams in the Big 12? We will find out soon.