Is it possible to understand the weaknesses of a defense from a single play? Here I break down the Texas defense on the 69 yard touchdown run by Joseph Randle by Oklahoma State. Was it scheme? Young linebackers? A disinterested secondary? Even the revered defensive ends? Turns out here's enough blame to fill a courtroom - but how well placed is it? More importantly, what can we learn about how the Texas defense might improve.

Share All sharing options for: In the Trenches - Breakdown of a Breakdown and Dissolving the Blame Game

When things go wrong, an immediate instinct is to point the finger of blame. When the Texas Longhorns have talented defensive players and a "hot" defensive coordinator and the opposition runs off touchdowns of 69, 44, 75 yards, etc., something is very wrong and someone or something is to blame. Of course. And as is also human nature, there must be one key thing or person to blame.

So I decided to take a look at one play, the 69 yard touchdown run by Joseph Randle of Oklahoma State in last Saturday's game and see what REALLY happened. To set the stage, Oklahoma comes out in a 1 RB 0 TE look with twin wide receivers to either side of the formation. This has the effect of putting both outside LB for Texas well outside the DE's in a coverage position. Texas is playing 2 deep safeties with man coverage underneath. We know this because OSU sends the slot receiver to the left in motion across the formation and Demarco Cobbs follows him nearly all the way to the opposite hash mark, indicating his responsibility is the slot receiver. At the snap of the ball, Texas has six players to the "field" or wide side of the field, counting Steve Edmond as the Mike LB. 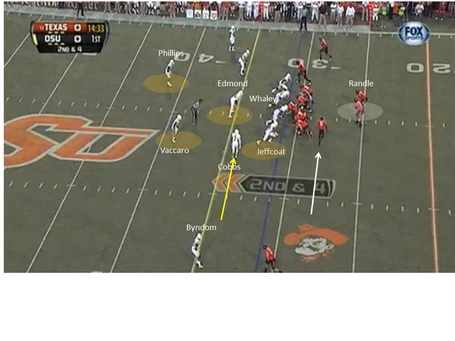 As we will see, Demarco Cobbs continues to follow the slot receiver all the way to the other side of the formation, apparently never looking at the snap, the QB or the RB. Note the pale circles that show the original locations of Adrian Phillips, Kenny Vacarro, Edmond, Jackson Jeffcoat and Randle 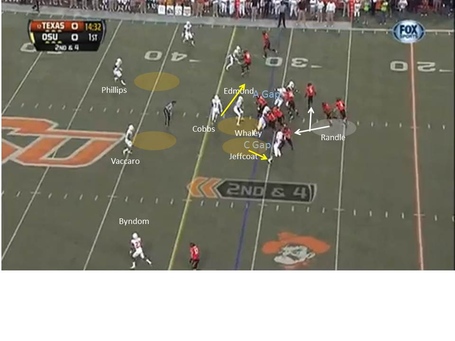 At the handoff, 1 second into the play (see above), it is VERY IMPORTANT to track what is happening in the major running gaps. The gaps are to either side of the center, the B gaps are between the guard and tackle, and the C gaps are between the tackles and a TE, or in this case outside the tackles. These gaps are defined by the position of the offensive linemen during the play regardless of where they move. As the play develops, Cobbs runs completely to the boundary side of the field in tracking the receiver in motion, leaving just 5 defenders, counting Edmond, to the field side. Jackson Jeffcoat cuts off any run outside the tackle (C gap) by charging hard upfield and is eloquently steered out of the play by the OSU OT Parker Graham. Chris Whaley, subbing for Brandon Moore at the nose tackle, is double teamed by G Jonathan Rush and C Evan Epstein and occupies the field side A gap. Steve Edmond appears to be responsible for the boundary side A gap and just stands in place, apparently watching both the man in motion and what's happening in the backfield. Thus by putting a man in motion against apparent man coverage and the blind adherence to assignment by Cobbs, OSU has created an uncovered B gap between the field side guard and tackle. 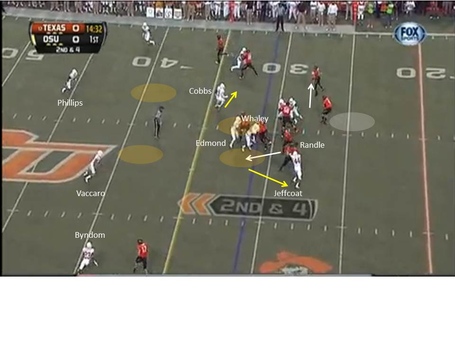 In the hole goes Randle. Note the pale circles that show the original location of Jeffcoat, Vacarro, Phillips, and Edmond. Whaley fights the double team and almost escapes to the vacated B gap, but Randle is too fast. Steve Edmond also tries to get from the boundary A to the field B gap, but also too late. His effort makes it look like he was confused and late, but in fact he was trying to cover a gap that would ordinarily be the responsibility of either Jeffcoat or Cobbs, in my opinion, and just didn't have the speed to get there. Note also, that both Phillips and Vacarro have been moving backward up to this point, and it is only now that Randle is crossing the line of scrimmage unimpeded that Vacarro begins to respond. As we will see, Phillips apparently has not recognized what is happening in the play, he is still not looking at Randle for some other reason, and has made no move to the field side. 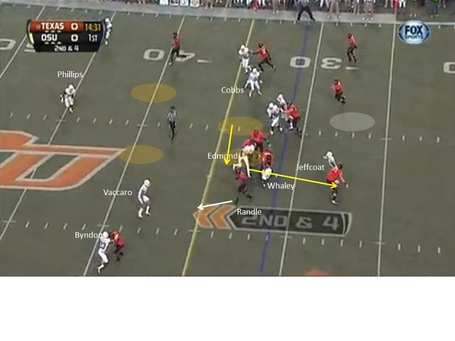 Vacarro moves up tentatively, keeping Randle positioned on his inside shoulder. Randle gives a stutter step which Vacarro does not handle well and ends up with his weight on his left (inside) foot, with no leverage to intercept Randle, who plants hard on his outside foot and moves straight up the field, leaving Vacarro to grab air. Note also that Carrington Byndom has tentatively stayed outside the playside hash mark, perhaps to keep contain, and has allowed the OSU receiver to get inside blocking position on him. Note also that only now is Phillips on the move.

Once past Vacarro, only Phillips and Byndom have any realistic chance of stopping Randle. Phillips takes a good angle and lines up for the collision (see below). At the last minute he turtles, pulls in his hands and lines up to punch out Randle's hip. 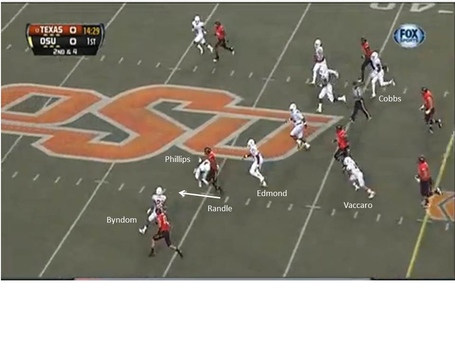 Byndom is mysteriously running parallel down the field rather than anticipating Phillips hit and preparing to clean up. Phillips fails to knock down Randle, neither Edmond not Byndom can reach him while he is off balance, and Joseph is free to run for the touchdown.

As is likely true for almost any long touchdown play given up by a defense, multiple things went wrong. In this case, only a small fraction of them can be laid at the feet of the young linebackers. Two of the star players on the defense had issues on the play: the complete loss of contain by Jeffcoat (a big problem with him last year that diminished, but apparently has not completely disappeared) and passive responses and poor tackling in the secondary were perhaps the major tactical flaws.

One final point - having Jordan Hicks in the game as the third Will linebacker (rather than Dalton Santos) would have made little difference on this play, as he would have been lined up in front of the slot receiver on the boundary side.

The Horns' blogosphere has complained for weeks about failed assignments by defenders and the young linebackers. If anything, the apparently rigid adherence to assignments by Cobbs, Edmond, and Byndom (maybe - it's tough to determine whether he was maintaining position to keep contain or was just passive) contributed to the play. One can argue - "it was just one play," and they would be right. But perhaps we have an alternative hypothesis about the struggles of the defense - the star defensive players, for whatever reason, are not playing as well as might be expected.

Finally, our hats should be off to Todd Monken for creating effectively an unbalanced line to the boundary side with a receiver in motion to exploit Texas' tendency to use man coverage underneath deep zone, and then run to the field side. It was a clever (though certainly not unique or unprecedented) play that exploits Texas' weaknesses, but there was nothing inherent in it to lead to a touchdown. Texas did the rest.

What, if anything did we learn about the Texas defense moving forward? Perhaps the most important thing is that the defense needs work in altering their assignments (and alignments) in response to pre-snap movement. If Jeffcoat was aware that Cobbs was crossing the formation then he would know he needed to make sure he covered the B gap. Later in the game, he "stayed home" when OSU ran a similar play, and flushed the play outside and then ran it down from behind. If Vacarro saw Cobbs move across, then he would know that he was responsible over the top only for one receiver and once it was clearly a run, to aggressively attack the area vacated by Cobbs. This is what experienced defenses do, and these were experienced players. However, each of these players may have had other reads and/or responsibilities, so it's difficult to point the finger of blame with impunity. As the Horns take on West Virginia, the key assignments and alignments to get right will be coverages, and the LB's and secondary need to communicate and be more aware of each other to succeed.