Texas offensive co-coordinator Bryan Harsin pulled the trigger on a red zone play that set the stage for a memorable Longhorns win on the road.

The game in Stillwater was an instant classic. It had it all. Intrigue. Drama. Controversy.

It was the second of these where our story intersects with Shamiel Gary.

Gary is no slouch. State high school football champion? Check. Division 1 football scholarship to The University of Wyoming? Check. It was here where during his freshman year he earned All American Freshman honors (Wyoming's inaugural honoree) as a distinguished starting defensive back. In his very first collegiate game against Weber State he collected three interceptions. And one of his many highlights came during a game against the third ranked Boise State Broncos his sophomore season where he accounted for 17 tackles, an interception, and a 2 PBU's. Through two seasons he accumulated 192 tackles (top 100 in the nation each season) and 11 PBU's.

But after his second year a family member became gravely ill and he returned home accompanying a transfer offer from Oklahoma State University which he gladly accepted as his goal all along was to play on Saturday's in front of friends and family.

After sitting out the 2011 season under NCAA mandated transfer rules, this young man worked hard on the scout team to earn the respect of coaches and teammates with a front row seat to arguably the most prolific football season in OSU's history.

This offseason, Gary competed for and earned a starting safety position and found himself juxtaposed in the 2nd quarter during last Saturday's game against the Texas Longhorns against some very astute confidence men.

After surviving the first salvo by the Cowboys, Harsin spread the field working plays to the boundary and the field with a series of screens and sweeps which pushed the offense into their territory in time to see Ash throw what many believe to be the absolute best throw of his young college career to Jaxon Shipley for the Longhorns first TD.

It is here where we meet up with Mr. Gary.

Three Card Monte is a long standing street hustle. You've got the dealer and the lookouts. You also have the mark. All you have to do is follow the Ace of Hearts, stamp the card with your bet and you win. They let you win, too. Why? It's a play on your confidence psyche. Once you have it figured out, you don't.

Harsin's trips wide alignment is based on the same misleading strategy as the con. He can run many route combinations from this formation which places a significant amount of burden on defensive back discipline. In this instance, the stress placed on the defense from the previous two plays will pay the desired dividend.

The below frame sequence illustrates the diversity of Harsin's schematic. 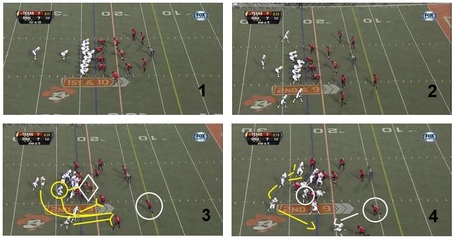 The 2nd down Wild formation is freshman Gatorade POY Johnathan Gray's to run. Like the dedicated kid he is, he hands the ball to Shipley on a sweep. Here we see our DIC, Shamiel Gray, make a very nice open-field tackle when Roberson fails to clear the way. This play has potential only when everybody carries out their respective blocking assignment.

On third down, we see altogether a different look than the previous two. Here the trips alignment is to the field side with Shipley and Davis set off the line with OSU man up on Goodwin and the safeties playing off. 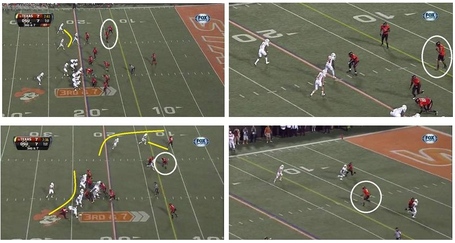 And this is the exact same formation in the Ole Miss game where red zone the defenders are playing a 2 deep zone.

What was great about this third down play is we saw the maturation of Ash as he appropriately recognized the defensive alignment and adjusts the blocking scheme.

Unlike the previous game results, Ash delivers the right trajectory to Shipley for the Longhorns pivotal second touchdown on the evening. Notice that Gary must have been asleep during assistant coach Van Malone's film review of Texas last opponent when he did not a) recognize the formation, and b) execute the coverage.

Harsin's offense is one of precision. He now has the tools in place to apply pressure as and how the situ warrants. The three man monte trips formation provides many passing options depending on down, distance, and field position. Creating indecision on the part of each defender every play is a big component to the system. Having the players to execute on demand is key to success and one of the very great things Longhorn fans are receiving so far this season. Hopefully he has concocted intricate formulations this week in the Defender In Conflict laboratory.