Texas vs Oregon Volleyball NCAA Championship Game Preview: An Inside Look at the Ducks

The Texas Longhorns volleyball team returns to the NCAA Championship Game for the second time in four years, squaring off with the Oregon Ducks. Will Rubin of Addicted to Quack gives us the inside scoop on Saturday night's title game opponent.

Share All sharing options for: Texas vs Oregon Volleyball NCAA Championship Game Preview: An Inside Look at the Ducks

Texas and Oregon play for the NCAA championship in volleyball on Saturday night at 6:00 pm CT on ESPN2.

The Gregory Gazelles are back in the NCAA Championship Game for the second time in four years, but after the Penn State Nittany Lions were knocked off in the other national semifinal, the Longhorns volleyball team will play the Oregon Ducks for all the marbles. For an inside look at the red hot Pac 12 squad, I exchanged questions with Will Rubin of SB Nation's outstanding Oregon blog Addicted to Quack. Check out ATQ for my thoughts on the Longhorns, and read on for Will's insights on the Ducks.

It feels silly to ask whether a team that just knocked off Penn State in the Final Four is going to be intimidated, but Saturday night's match will be Oregon's first appearance in the NCAA Championship game in program history. Any thoughts as to whether the big stage will affect the team at all?

Addicted to Quack: I thought the stage was affecting them early in the match against Penn State, and that they were getting flustered by the Nittany Lions' block. However, the team was throttled in the first set against Nebraska and then won the next three, and did the same to Penn State. Oregon also starts six upperclassmen, so there's a lot of experience to draw on when the time comes under the lights.

This was a record season for Oregon in a lot of regards, with 26 wins the most ever since the start of Pac 12 play in 1986 and the Ducks earning their first-ever home game in the NCAA Tournament. Were fans looking for this kind of season from UO in 2012, or did this team outperform expectations?

I think fans were looking for big things, but certainly not this big. When Moore came in eight seasons ago the senior class he inherited had won only two Pac-10 matches over the previous three seasons. He's slowly but surely built the team into first a competitive Pac-10 team, then a competitive national team, and finally a national contender. The Ducks played well enough to earn a hosting spot last season, but got shafted by the committee, so there's been that chip on their shoulder all season. With all the preseason accolades and returning star power, I think the hosting of an NCAA tournament regional was the expectation.

Do flying robots compete in the Miss America pageant? If so, then I pick the latter, because she's simply inhuman. It's been kind of fun the last 30 hours or so with the "oh, Oregon's going to play for a national title after all" cracks, and now the "Oh, Oregon won a player of the year award after all (Montee Ball notwithstanding)" comments are in play too. She's a do-everything player for Oregon and to quote Coach Moore, "Has all the marbles." Just like Sonja Newcombe was a program-changing recruit for the Ducks when they were just beginning to scratch the upper part of the conference, Bergsma has been the lynch pin in getting Oregon to the top of the heap. 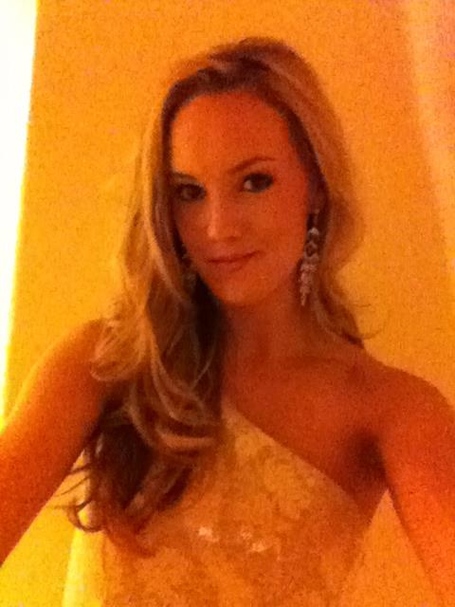 Damn pretty for a robot.

When is this Oregon volleyball team at its best? What are the signs that it's struggling?

Oregon seems to live and die by its serve. They tend to have a large number of aces and forced free-balls over the course of a match, but can also be shaky from behind the end line. I've covered matches where they've averaged 3 or 4 service errors in a set, let alone a match (the Cal match in Eugene comes to mind). They're at their best when the serve allows them to run a set through junior setter Lauren Plum, and she's spreading the ball around enough to confuse the opposing defense. senior Kat Fischer, junior Ariana Williams, and sophomore Liz Brenner - who plays four sports here at Oregon (volleyball, basketball, softball, and track) - are all threats to have big matches alongside Bergsma, and that can create havoc.

Tell us a player for the Ducks besides Bergsma who you think may play a pivotal role in the outcome on Saturday night?

Senior Libero Haley Jacob is the definition of unsung hero for this Oregon squad. She plays outstanding defense - finishing her Oregon career second all-time in digs - but does a ton of little things to keep the floor in check. The announcers were all over her presence against Nebraska as she saved numerous points off of the Nebraska block, and she's also one of the Ducks' best servers.

Just because you declined to ask me doesn't mean that I'm letting you off the hook so easily. Let's hear it: your prediction for the match, sir.

Frankly, I thought they'd lose to Nebraska. Then I thought they'd lose to Penn State. There's just something about this team that reminds me of the 2010 Oregon team in that once they got going, you just knew they were gonna find a way to win. Now, this is the National Title match, and Chip Kelly and Lamichael James (thanks for not recruiting him, by the way) couldn't overcome Nick Fairley in Glendale, but I think the volleyball team's been tested in ways that the 2010 squad wasn't prior to Auburn. Therefore, I'm going with the homer pick and taking Oregon in four sets.