Early in the game against the Sun Devils back in early November, the Beavers starting quarterback for the Alamo Bowl, junior Cody Vaz, struggled mightily in the early going -- in the first quarter alone, he fumbled in the pocket twice, one of which was recovered by Arizona State and taken into the endzone for a touchdown. That was on the third play of the game.

On the fourth possession, Vaz suffered the second fumble, which an offensive lineman was fortunate enough to recover near the Oregon State goalline.

To start the fifth possession, the Beavers were once again backed up near their own goalline on the 11 yardline

The Beavers come out in a relatively typical personnel package on first down -- three wide receivers, a single running back, an H-back off the line of scrimmage, and Vaz under center.

Meanwhile, the Sun Devils counter with two deep safeties, a linebacker lined up over the slot receiver, and two linebackers in the box. While the middle linebacker starts out next to the weakside 'backer, the former moves towards the line of scrimmage well before the snap, indicating a blitz into the gap between the strongside linebacker and the strongside defensive end. 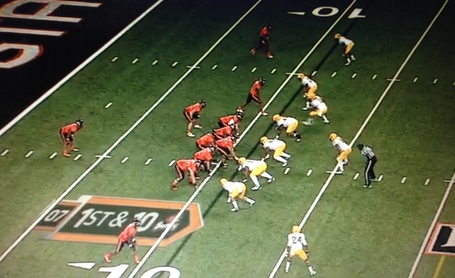 The wide receiver to the top of the screen comes in motion behind the formation, threatening the jet sweep.

Vaz executes a playfake to the running back while the wide receiver comes past on his jet sweep action.

There are several aspects this play that cause it to break down -- Vaz either doesn't identify the blitz before the snap or decides not to check into a different play and has his back turned for the play fake, while the running back has to account for the blitzing linebacker instead of the H-back doing so. 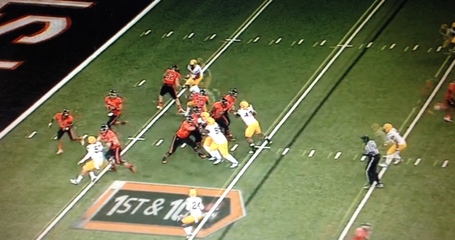 The running back, 5-9 Malcolm Agnew, barely gets a hand on the linebacker, while Vaz has his eyes downfield and to his right -- he will have to feel the blitzing linebacker or recall that he showed blitz to get this ball out on time. 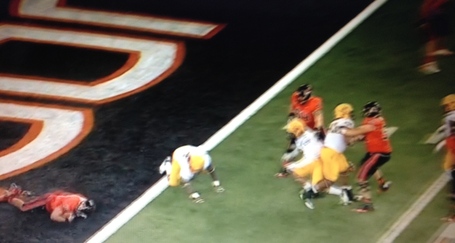 Since Vaz is seemingly unaware of the pressure and never checked to a quick passing play, he holds onto the football too long and ends up face-down in his own endzone, lucky that he didn't add a safety to his two first-quarter fumbles inside his own 10.

Vaz reacted poorly to the pressure shown by Arizona State throughout the early part of the game, failing to demonstrate any advanced pocket awareness to make subtle moves to avoid rushers, the ability to get the ball out quickly to avoid the pressure, or any significant mobility to take off and pick up positive yardage.

In terms of overall awareness and ability to deal with pressure, Vaz was flat-out terrible against the Sun Devils, who accounted for six of the 12 times that the junior quarterback was sacked all season. Vaz also struggled in this respect more so than sophomore Sean Mannion, who was the starter at the beginning of the season, but lost his job after struggling following his return from mid-season knee surgery.

While Vaz was sacked roughly every 14 times that he dropped back to pass in 2012 (passing attempts + sacks/sacks), Mannion was sacked the same number of times, but attempted almost twice as many passes, going down once every 27 pass attempts. By comparison, David Ash, who was protected extremely well for most of the season, was sacked once for every 37 pass attempts. Again, rough numbers here that don't account for other scrambles.

The point is to illustrate that while Vaz threw only one interception to 13 for Mannion, the former had some issues in getting the ball out. Even if Vaz wasn't as bad against the Sun Devils as he was the rest of the season (and the stats support that), the play shown above and the overall performance back in early November provide some evidence of how bad Vaz can be at his worst.

And that plays directly into the hands of what Texas defensive coordinator Manny Diaz likes to do. The Oregon State offensive line was complicit in some of the sacks against Arizona State by giving up early pressure, but if Diaz can isolate linebackers against Agnew on the blitz, this play indicates that Texas has a solid chance of getting to Vaz, who may not be capable of consistently making the right pre-snap adjustments to shorter routes.

All that is a fair amount of conjecture based on one play and overall numbers, but if Diaz blitzing on early downs was a frustration for much of the season, if such blitzes can get home in the Alamo Bowl, the Longhorns could put the Beavers well behind the chains and kill some drives before they even begin.

Since Vaz is much more likely to hold the football too long rather than force it into small windows, getting sacks and forcing fumbles may be the best way that Texas has to turn Oregon State over and get some short fields for the offense against the excellent Beaver defense.

So, be ready for some blitzes early, Mr. Vaz.