What an internet meltdown looks like. It's easy to forget, sometimes, the uncertainty surrounding the Texas football program in December of 2010. At one point, attrition of the staff left the program lacking: both offensive and defensive coordinators, offensive and defensive line coaches, defensive back and linebacker coaches, a quarterback's coach, a wide receiver's coach, and I suppose if you care to count it, a special teams coordinator. In the midst of the rumor mill, Texas feared losing Major Applewhite, losing Jerry Gray, and losing Mack Brown himself.

All of this uncertainty makes analysis of the last year particularly interesting; we as fans get to vet the new coaches with the results on the field. To that end, I've recently begun compiling a database of every play Texas (and for that matter, every other team) logged for the last several years. I hope to use this dataset to write a few posts on last season in the context of how Texas has performed historically as well as relative to the college football landscape as a whole. Consider the next couple of articles preliminary; I'll delve into more advanced and (hopefully) interesting analyses later.

After the jump, let's take a look at the defense.

Some background on the defense. Texas allowed 306 yards per game on defense last season, good for #11 in the country. Texas allowed teams to rush for 3.8 yards per carry against them, and pass for 6 yards per attempt; these are good for #11 and #9 in the country. These are good numbers, and they're basically unchanged from 2010. In fact, in almost every standard metric, the Texas defense in 2011 looks more or less like the Texas defense in 2010: interceptions, scoring, sacks, it's all basically a wash. Since the 2010 defense was allowing a paltry 4.6 yards per play, this is meant to be a compliment. However, there are some differences resulting from Texas Defensive Coordinator Manny Diaz's almost incessant blitzing.

Manny Diaz more than just a blitz-happy fool. To paraphrase Wescott, Manny Diaz is indeed more than just a blitz happy fool. Although, it seems, if that's all he is, then he is a good blitz-happy fool. My favorite statistic from this last season is that a full 20% of rushes against Texas never made it back to the line of scrimmage, and 30% went for 0 yards or less. This is an astonishing number of negative runs. The difference in philosophy with Will Muschamp is most evidenced here, as the 2010 Texas defense only stopped a running back behind the LOS 2% of the time. These are substantive philosophical differences evidencing themselves in the data. I like it. You might expect that the flip side of the coin would be that Texas was giving up more long plays due to the aggressive nature of the blitz. This is only very slightly true: In 2011, the Texas defense allowed 2 more big plays (plays of greater than 10 yards) per game than in the year before. Furthermore, all of the difference is in the passing defense (+3 long plays per game allowed vs. 2010). The rushing defense was actually better at preventing big plays in 2011 (-1 long plays per game allowed vs. 2010). My intuition tells me that trading stopping 1/3rd of all rushing attempts behind the line with 2 big plays given up per game is a win for the Texas defense. I'd bet Diaz agrees.

The team-by-team breakdown. One relatively simple thing to do is to examine game-by-game defensive statistics. In the chart below is the defensive performance against each of Texas' 13 opponents. On the vertical axis is our opponents' yards per pass attempt; on the horizontal axis is yards per rush attempt. As a Texas fan, the farther a team is to the left and to the bottom the better. Keep in mind the averages are about 4 yards per rush and 6 yards per pass attempt -- right in the middle of that big cluster of teams. However, two absurd outliers are Oklahoma State and Baylor. Oklahoma State managed to exploit wide open running lanes and mistimed tackles on their way to averaging over 8 yards per carry. Baylor is the opposite story -- Robert Griffin absolutely torched the Texas secondary through the air at a video game clip of 15+ yards per pass attempt. Since he also led the country in yards per attempt at 10.7 (for some context, that is the highest mark for a QB in any of the last five years), I'm not terribly embarrassed by this. If only he had been good enough to play quarterback at Texas. 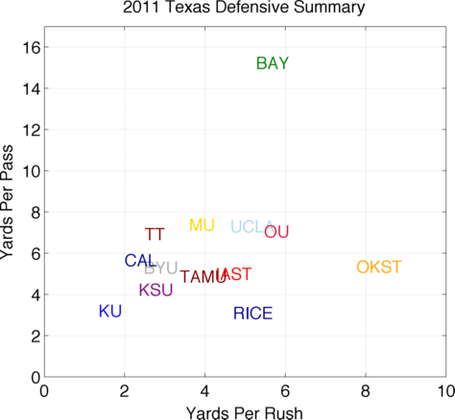 Adjusting for opponent quality. The natural thing to do is to consider how well Texas defended an opponent relative to the opponents' own averages. The plot below depicts these adjusted defensive performances; Texas' opponent's averages have been subtracted from their performance against Texas. So, for example, Rice averaged 1 more yard per carry against us than on average, but passed for 3 fewer yards per attempt than their season average. Let's examine what these numbers tell us. First of all, note that the relative positions on the chart of these teams don't change very much. In particular, I noticed that the Oklahoma game, as painful as it was to watch, was basically an average performance from the Texas defense (the offense on the other hand is a different story for a later date). Oh and Texas absolutely obliterated Kansas, with 40% of Kansas' rushing attempts not even making it to the line of scrimmage -- solid effort there. 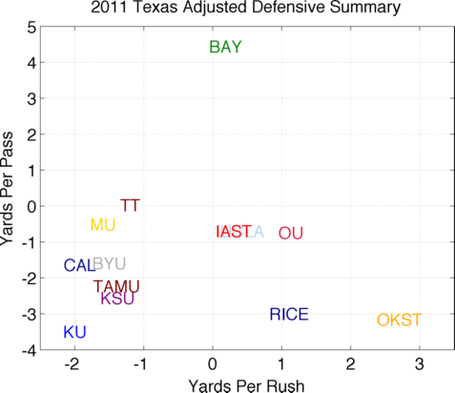 Baylor. Once again, Baylor and Oklahoma State stand far out from the pack. What is astonishing to note is that Baylor actually averaged over 4 yards per pass attempt more against Texas than they did in general. One might guess that in preparing to stop Baylor's run game Texas gave up more than it should have in the passing game. However, besides the outlier that is Baylor, Texas held every other opponent to at least their average passing output, which is encouraging.
Oklahoma State. Against Oklahoma State, the Texas defense was downright terrific in stopping the pass -- at the expense of allowing OSU 3 more yards per carry than their season average. Oklahoma State was not a great running team last season (160 yards per game good for 51st nationally), but Texas allowed their starting running back to break into our secondary where... bad things happened. Again, a good guess is that Diaz over-prepared for the Weeden-Blackmon passing game (a reasonable strategy) and was torched by that decision. I can't quite say that I'm pleased with this game plan, but its defensible. 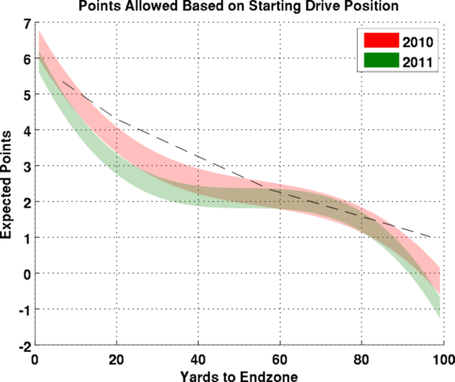 Drive expectancy. Expected points are the number of points a team can expect to score (O RLY?) given a starting field position on a drive. BrickHorn excellently analyzed the Harsin offense using expected values and compared it with the 2010 debacle of an offense (which I've openly mocked here). I'd like to do something similar for the defense. Above are the points an opponent of the Longhorns could expect to score given a particular starting field position in both 2010 and 2011. The dashed black line is national average over the last several football season (national data from BCFtoys). What's clear is that both years' defenses really tightened up inside our 40 yard line, but were pretty average in the open field. What's particularly interesting is that it didn't matter last year if an opponent started its drive at its 40 yard line or Texas' -- they were coming away with less than a field goal.
Improvement! There were definitely noticeable and meaningful improvements in defense inside the 40 yard line in 2011, and this is further evidenced in the Texas red zone defense: in 2010 the Texas defense allowed 4.7 yards per play in the redzone while in 2011 Texas allowed only 2.5 yards per play. Big difference, and a big improvement, although whether this translated into actually preventing scores or simply delaying the inevitable is an interesting question that I'll perhaps consider in a future post.
Thoughts? In conclusion, this is just a start. I haven't begun to really analyze the mountains of data sitting on my computer. So, although I have some ideas already, I'd welcome your suggestions. What would you like to know about our defense? One thing in particular I've got in the works is looking at defensive play on different sides (left, middle, right) of the field. Next up, though, is the offensive summary.
Notes on the methodology: A total of over 1000 plays comprise the 2011 defensive season. All play-by-play rushing data is corrected for sacks; only plays that were actually rushing attempts are counted. The expectancy chart is obtained by compiling all drives from a season, binning field position non-uniformly based on my judgement, and nonlinearly regressing the resulting data. The thickness of the red/green lines is a rough indicator of variability. The expectancy charts are meant to be generally qualitative, although the trends are accurate.