No. 6 Cincinnati vs No. 11 Texas: Open Game Thread

Share All sharing options for: No. 6 Cincinnati vs No. 11 Texas: Open Game Thread 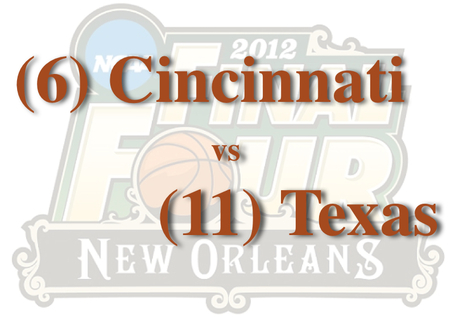 This is it. The moment towards which every college basketball season is built. Whether you start the Tournament as the top seed or one of the last teams in the field, it's all the same: four games to the Final Four, and no second chances. Officially, it's win-or-go-home time.

In many respects, Texas has done well just to get here, and though if the Longhorns do fall today they should feel good about what they accomplished this season, now that we're actually here -- now that it's really four games to the Final Four -- for both the team and fans alike, the desperate desire to win drowns out every other consideration. Today, no one is content merely to be in the Tournament. Because today, Texas' season life is on the line -- no tomorrow... unless we win.

I may be stating the obvious, but that's really what makes this event so special. It's also what makes getting in to the NCAA Tournament field such an enormously important accomplishment. Same as Kentucky, Kansas, Syracuse, and Missouri -- for Texas in 2012, it's four games to the Final Four.

And once you're in, you never know what might happen, and the only way you can be sure you'll fall short is not to get there at all. Ask Butler.

A year ago, the Bulldogs were incredibly fortunate to survive their opening round match up with Old Dominion, but they did -- if barely -- and after that managed to win three more games, and just like that, there they were, in the Final Four, no less legitimate a participant than anyone else. A year later, and the only reason we can say with any greater certainty that Butler will not reach the 2012 Final Four.... is the fact that they did not earn a bid to compete.

All of which is to say that Texas is in, and as of today, that's all that matters. For today, although our season ends with a loss, like everyone else -- whatever their seed -- we advance with a win.

Win and advance. Lose and go home. That's what it's all about. And for the 14th consecutive season, we're here. Our odds may not be good... but we have a chance.

I wouldn't trade it for the world. Hook 'em!