This is the one I've been excited about. As I pointed out in the previous post on the defense, Texas football was in relative turmoil at the end of the 2010 season with a veritable Help Wanted sign hung outside of Belmont. Although losing and replacing the defensive coordinator is a Big Deal at any program, my attention was far more fixed on the search for an offensive coordinator. All great football movies end on a victorious offensive play in which our masculine (or occasionally canine) hero hurdles over the unwashed masses of the defense on his/her/its way to the game winning touchdown. Very few end on a perfectly executed defensive line stunt and a missed blitz pickup that leads to a sack (did Air Bud even play defense?). So, I was particularly excited to examine the data on the offensive side of the ball for Texas. Let's take a look.

Big picture stuff. First, let's look at the big picture stuff, the yards per play for both the passing and rushing offense, with last year's numbers for comparison:

Of course, I've taken out any sacks in the rushing averages. The data are basically identical if you look at just the 9 common opponents Texas played both years:
with perhaps 2011 Texas getting slightly better after correcting for opponents. In any case, what is clear from the numbers and clear to anyone who suffered through the 2010 season -- Texas got a little bit better on offense. If you recall my previous examination of the 2011 offense, I concluded that through 3 common opponents Texas had significantly improved its passing offense. The passing offense regressed somewhat after the first few games, liekly due to facing better defenses. The running game was improved both in volume (562 attempts in 2011 vs. 415 attempts in 2010) and efficiency. In doing so, Texas gained almost a thousand more yards on the ground in 2011 (2842 yards) than in 2010 (1965 yards). As I noted in the last post, one legitimate criticism of Greg Davis was that he did not run the ball enough, so this is encouraging. Interestingly, the biggest difference in rushing averages was in the 3rd quarter, where 2010 Texas plummeted to 3.9 YPC whereas 2011 Texas improved to 5.8 YPC. I'm not quite sure what to make of this fact. Finally, I'd like to point out that the turnover numbers are a wash between 2010 and 2011. Texas lost approximately the same number of fumbles and threw approximately the same number of interceptions in both years. 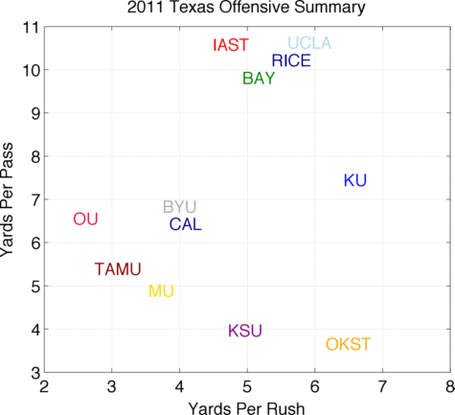 Game-by-game results. Just as we looked at the defensive game-by-game variation, let's take a look at the offense. In the plot above is the Texas offensive rushing (horizontal) and passing (vertical) performance for the 2011 season. Note that Texas Tech is literally off the charts here (8 yards per rush and 17 yards per pass attempt on only 9 attempts), so I've left it out of the picture. Keeping in mind that Texas' averages for rushing and passing are about 5 and 7.5 respectively, you'll notice that there's not a lot of teams around that coordinate. This means that the averages aren't great indicators of true performance; Texas' offensive output varied significantly around its average. Of note is that all of the good passing performances by Texas also came with good rushing performances. It's dangerous to extract causality from this, but it does suggest that the Texas offense relies on complementary rushing and passing attacks. Generally speaking, both need to be working well for either to succeed -- not terribly surprising I suppose.
Secondly, note the arc of bad. Trace a line with your finger from OU to TAMU to MU to KSU to OKST. All games OU or later, all games in which Texas sustained some form of injury to key contributors, and Texas lost 4 of those. Importantly, these are all games in which either the running game or passing game performed well below average. A crucial point going into the next season is to minimize such outliers. Because the defense is dominant, the Texas offense does not have to be excellent, merely adequate. No better example of this than the bowl game victory, in which the defense balled particularly hard, and yet the offense was almost exactly average [CAL is nearly at (0,0) in the plot below]. Ball's in your court, offense. 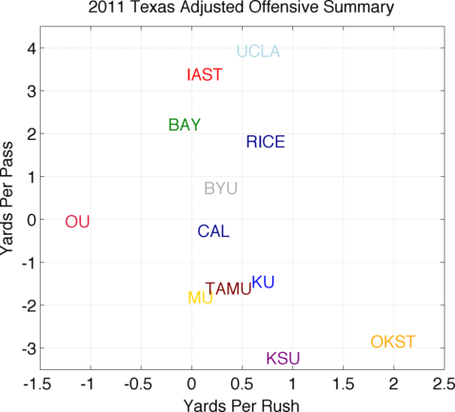 Opponent defense adjusted game-by-game results. As I did with the defense, I can adjust the results with the opponents' rushing and passing yardage allowed, to get a sense of how Texas performed relative to an opponents' defense. In the chart above, I've subtracted the opponents' mean allowed yards per attempt to gauge exactly this. Some things to note: 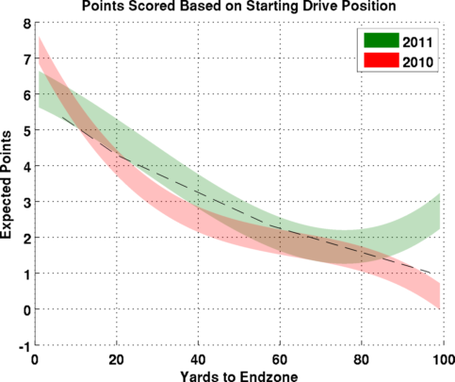 Clear improvement in offense in terms of expectancy. I've mentioned BrickHorn's excellent analysis of the Harsin offense previously, and I'm going to re-tread on some of his thoughts here. Looking at the expectancy chart above, it's clear to me that the 2010 Texas offense was below national average (the black line) almost everywhere on the field. The 2011 offense fares far better, and outperforms the 2010 attack as well as the national average (national data by BCFtoys) 60 yards and in. The green spike near 100 yards is not a mistake -- several Texas drives started with nearly the entire field ahead of them and ended with a touchdown. In conclusion, I think there are clear improvements over the 2010 offense that are evidenced here.

Injuries. It's important to note what I haven't considered in all of this -- injuries and inexperience. Injuries to Fozzy, Brown, Bergeron, Shipley, etc. we are all too painfully aware of. Perhaps a more even distribution of carries will help avoid injuring our talented stable of backs. Beyond injuries it is important to remember that our top passer (Ash: 1079 yards), top rusher (Brown: 742 yards) and almost our top receiver (Davis: 609 yards vs. Shipley: 607 yards) were all true freshmen. These are nineteen-year-old kids being asked to be the primary drivers of a Big 12 offense; a year in the system will do everyone a lot of good. Given these things, and the fact that our recruiting has incredibly not missed a beat, I am guardedly optimistic for next season. As I mentioned above -- if the Texas offense can be just average, Texas has the talent on defense to beat almost everyone on the schedule next year.

Finally, to add fuel to an already raging fire. Anyone paying even a bit of attention to Texas football this offseason knows who the starting QB is come next fall, so debating the merits of starting McCoy over Ash has become largely academic. However (and this is a point I begrudgingly make), I have to stress how similar McCoy and Ash look on paper. Below is the same adjusted offense chart I showed above, but with the name of the primary QB in place of the opponent. Both McCoy and Ash are all over the place here, showing no clear separation. Furthermore, they are very similar in every other relevant metric to evaluate QBs. Tellingly, whenever either QB was asked last season to throw the ball more than a handful of times, neither was terribly successful (the Oklahoma State game for Ash and the Baylor game for McCoy are great examples of bad QB play against bad passing defenses). In the absence of clear separation on paper I have come to the dramatic conclusion that I trust the judgement of the coaches here. 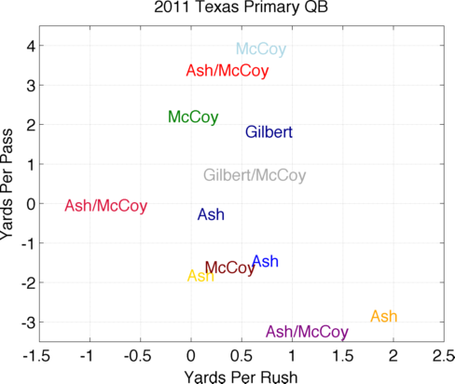 Thoughts? As with the defensive summary, this is just the beginning of what I hope to do with this data. So have at it -- what would be some interesting things to see? I'm really interested in looking at left/middle/right breakdowns in the running game (the passing game slightly favors the left side), examining quarter-by-quarter breakdowns more carefully, and picking out play-calling tendencies as a function of down and distance. Plenty of fun things to do this summer.

Notes on the methodology: A total of about 1100 plays comprise the 2011 offensive season. All play-by-play rushing data is corrected for sacks; only plays that were actually rushing attempts are counted. The expectancy chart is obtained by compiling all drives from a season, binning field position non-uniformly based on my judgement, and nonlinearly regressing the resulting data. The thickness of the red/green lines is a rough indicator of variability. The expectancy charts are meant to be generally qualitative, although the trends are accurate.