Share All sharing options for: Texas Longhorns Basketball: Inside the Numbers, Week 17

Everything is now set for the Big 12 tournament. The consensus is that Texas needs to win their first game against Iowa State to make the NCAA tournament, although that consensus could change several times between now and Sunday. The truth is, without a big run in the conference tournament, it will probably be a pretty close shave for the Longhorns. It is quite likely that their NCAA tournament would start in Dayton, Ohio, should they make it at all.

This is uncharted water for recent Texas Longhorns fans. I can't remember a time where conference tournament play affected Texas' possibilities of earning an at large bid in the NCAA tournament. For the next 5 days, Texas basketball will be sweating out the bubble. Should Texas beat Iowa State, it doesn't necessarily mean that they are in. And should the Longhorns lose, it doesn't mean that they are out. There are a lot of factors in play, and we have to let them all play out.

That said, if Texas beats Iowa State, I will feel reasonably good about their chances, and if they lose, I won't feel particularly confident.

This week, I recap the games against Oklahoma and Kansas, and look at how Texas attacked Oklahoma's 3-2 zone defense.

Texas struggled getting shots to fall in this game. They still managed to win by doing everything else well. From the table above, we see that Texas took more shots than Oklahoma (FGA+0.475xFTA), and was more efficient with those shots, as measured by true shooting percentage (TS%).


When Texas was on offense against Oklahoma

I am going to take some time to really break down what happened when Texas was on offense, because it gives me an opportunity to write about one of the ways to go about attacking a zone defense. In the post game writeup, I expressed my opinion that I felt that Texas' approach to attacking Oklahoma's 3-2 zone defense was pretty solid. They just didn't hit as many shots as you would normally expect to hit from three point range against that zone. Against a 3-2 zone, you really have to put stress on the two wings and the two back-line defenders by forcing one of them to guard multiple players. This is an essential aspect of most zone offense, which focuses on overloading one or two zones. One of the best ways for a guard-oriented team to attack a zone defense is to combine this type of zone overload approach with dribble penetration at the seams of the defense. Let me use a few diagrams to help explain this, and tie it back in to the approach Texas used to attack the Oklahoma zone.

In the diagram below, we see a basic 3-2 zone setup and how a typical offense might align against this zone. "X" is defense, and "O" is offense. That orange round thing is the ball. I have indicated a couple of things to consider as we understand how to attack this defense. The red arrow points to the defender who's zone is under attack by the alignment of the offense. He has to account for both the man in the corner and the man with the ball. These two offensive players are not particularly close together; in the configuration that I have diagrammed, the man with the ball and the man in the corner are probably separated by roughly 25 to 30 feet. I have also used blue lines in the diagram below to indicate where the seams are in the defense. These are the points where the guards want to attack the defense off of the dribble. In particular, it is very helpful to attack the seam between the defender at the top of the key and the overloaded defender on the wing. When the guard attacks these seams, he either wants to get into the paint, or wants to draw two defenders and look to pass the ball. 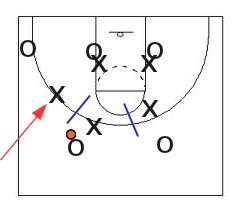 Rick Barnes has an interesting approach on offense when he attacks a zone defense like this. Barnes likes to screen more against zones than what other coaches might normally do. In particular, Barnes likes to set ball screens to help the guards attack the seams against a zone. This is a bit unconventional, but actually isn't a bad idea, as zone defense isn't always that well equipped to deal with ball screens. The diagram below illustrates something the Longhorns did in the first half. The ball screen would be set on the defender at the top of the key. The wing defender wasn't aggressively anticipating and helping against this screen, and the Texas guards were getting into the paint. 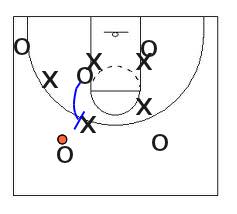 In the second half, Lon Kruger adjusted, instructing his wing defenders to prevent this from happening. This moved the wing defender up higher, which makes the ball screen more difficult, and the seam smaller. It also makes it more difficult to guard the man in the corner. Let's show one example of what this led to in the second half. The player with the ball for Texas is indicated with the red arrow in the photo below. The wing defender is marked with the yellow arrow, and is now in better position to prevent dribble penetration. But he also can't move quickly enough to get to the man in the corner and prevent the three point shot. 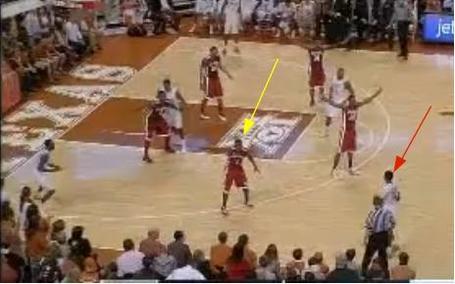 Sheldon McClellan led all Texas scorers with 5.8 Points Above Median (PAM). J'Covan Brown managed a PAM of 3.4, and Sterling Gibbs showed off his shooting touch with a PAM of 2.8.

Aside from shooting, Texas did everything else well when on offense. They only turned the ball over in 19% of their possessions, and grabbed 37% of the available offensive rebounds. This was enough to give them a respectable offensive rating of 104 points per 100 possessions.

When Texas was on defense against Oklahoma

Our friend JC over at Barking Carnival had this to say about the Texas on-ball defense.

The second is poor on-ball defense, a trend that's been bothering me the more I watch the Longhorns. Texas fans probably take for granted the past few years: Dogus Balbay, Justin Mason, Avery Bradley, and Cory Joseph were an embarrassment of ball-smothering riches. This year's group is nowhere close. Way too often, the cadre of Brown, Kabongo and McClellan get burned by the opponent off the dribble, forcing Texas' interior defense to collapse and play the ball. It results in way too many easy dimes, and prevents Texas from properly boxing out on defensive rebounds. Julien Lewis is currently Texas' best perimeter on-ball defender, someone that can become an All-American Glue Guy in time, and not having him on the court to help check Steven Pledger hurt.

I agree with JC's assessment. Despite the trouble in preventing guard penetration (particularly against ball screens), the Texas defense still was quite effective. Texas held OU to less than one point per possession. They did this with very good help defense. Oklahoma is really a jump shooting team on offense. On the season, 53% of their field goal attempts come on two point jump shots. In the game against Texas, 65% of the Oklahoma field goal attempts were two point jump shots. Only 20% of Oklahoma's attempts were taken at the rim. The Texas big men were solid on help defense, and were effective at clogging up the paint.

When it came to rebounding, Texas allowed Oklahoma to get 34% of the available offensive rebounds. This is not a particularly good showing on the defensive glass, but we have seen far worse from the Longhorns this season. So all in all, this wasn't too bad. Jaylen Bond was an animal on the boards, grabbing 40% of the available defensive rebounds while he was in the game.

Texas struggled offensively against the #4 rated defense according to kenpom.com. Kansas is very good overall on defense, and they are outstanding on the defensive glass. The Kansas defensive rebounding was able to neutralize one of Texas' strengths on offense, which is the ability to go to the offensive boards.

Given the way that Kansas defends, Texas was going to need some help with poor shooting from the Jayhawks in order to steal a win in Lawrence. That didn't happen, as Kansas shot well from the field and took 30 trips to the free throw line. Texas actually played really well defensively in the first half of the game, holding Kansas to a true shooting percentage of 0.353. In the second half, Kansas had their way offensively with Texas, with a true shooting percentage of 0.637.

The bright spot in the second half for Texas was J'Covan Brown, who became unguardable, hitting tough shot after tough shot. Brown finished the game with a PAM of 8.9. Julien Lewis picked his spots for a PAM of 2.3. Clint Chapman also played very well, ending up with a PAM of 1.4, and grabbing 20% of the available defensive rebounds while he was on the court.

What was a problem for Texas was that they had no answer at all for Tyshawn Taylor. Taylor earned a PAM of 7.8. Some of these points by Taylor came on fast breaks where Texas didn't get back on defense. Taylor was also able to penetrate the defense in half court sets.

I think the lesson of this season is that the Kansas Jayhawks don't really have "down years."