The Fire Zone is a bald face lie. It is deceitful and misleading. In essence, it is a real bitch. - Anonymous

Spring intra-squad games are instructional for one primary reason: To provide an opportunity to simulate game situations and test the progress of personnel. The April 1st Texas vs. Longhorns annual spring scrimmage certainly lived up to that billing and, with the exception of a play here or there, did not offer too much red meat for fans.

However, there was one play in the second period that captured my attention and should capture yours equally.

After Case McCoy was unsuccessful in leading any meaningful sustained drives against the stout #1 defense, Coach Brown thought it best to give him some reps with the #1 offense. That put leading quarterback David Ash in with the 2-deep offensive personnel. He too found the going tough sledding as the #1 defense (less Kenny Vaccaro) stymied almost every rush and pass attempt thrown at the Diaz defense.

Trailing 21-0 in the 2nd quarter, the Longhorns started a drive at their 17 yard line. First down resulted in a 15 yard pass interference penalty against Byndom, who was pulled by Akina after the error. With the ball now on their 32 yard line, the Longhorns lost a couple of yards on 1st down (a Jeremy Hills hand-off tripped up by gap busting Tank Jackson) immediately followed by a no-gain bubble screen to DeSean Hales on 2nd down (great play by Brandon Moore to sniff it out).

Facing a 3rd and long, Harsin opted for a balanced formation hoping a spread look would open up a few passing lanes. The #1 read appears to be Mike Davis (X) who is facing man coverage against the substitute true-freshman Duke Thomas. 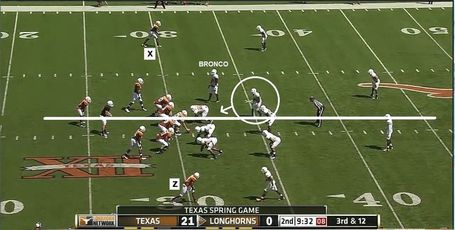 The defense is set in a Base 4-3 Bronco Cover-2 shell. The coverage would be classified as MOFO (2-high middle of field open) if the H-Back motioned or there was a Y receiver in the slot dragging the FS toward the Field side. For this basic Fire Zone play, Cobbs is the initial domino to fall. Offensively, Harsin would normally motion the running back in this set to the strong side to "spread" the defense. However, as you'll see in the following frames, the call is an easy read for the defense. 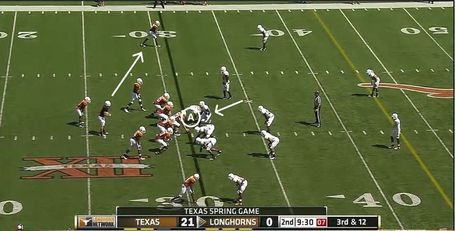 Cobbs is the first chess move in the Fire Zone dance as he jockeys toward the LOS showing blitz. Ash glances at Mike Davis signaling him as the hot read. As designed, the blitz look plants the seed of doubt. Here we see Cobbs aligned in the A gap. Brandon Moore also adjusts to his right into a 1-Technique alignment. Ash delays the snap further to give his center time to audible the blocking assignment. 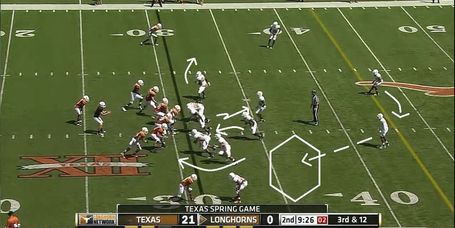 Anticipating the snap of the ball, the rhythmically smooth timing of the Fire Zone deception trips the "jaws of the trap" as Cobbs retreats to his original position and now both (MLB) Edmond and Hicks (WLB) rush the LOS. Notice the 4 on 3 overload, a hallmark of the Fire Zone. As Ash bears down on the "point of the spear" he calls for the ball realizing the blocking audible and X-hot read are now in question. Note that Mykkele Thompson (2-high safety) has roll down coverage responsibility into the now vacated zone left by Hicks. 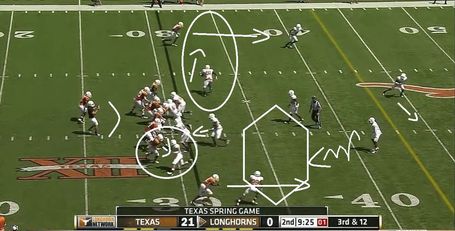 After the snap, Darius Terrell's (TE) first priority is a long-stick contain on Hicks but does a poor job in performing the block before turning out on his curl to the flat. Also note that Reggie Wilson (Bronco/SDE) is already positioned in the curl-flat coverage area and Cobbs has underneath middle zone contain. This coverage is designed to inhibit the quick slant throwing lane as well as be in position to make a play on the H-Back or RB if they get loose on in his zone. Mykkele Thompson should be in prime position for an interception if Ash makes the correct read. Note the absence of any play action to hold the defenders. 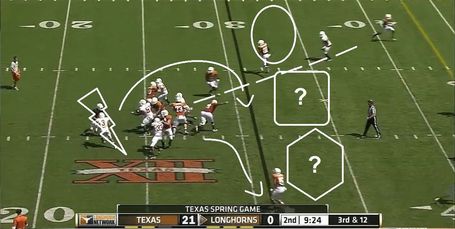 Note that Darius Terrell (TE) is wide open due to busted coverage assignment by Mykkele Thompson who was probably held in check by Ash keying on him. The 2-high safety has responsibility for the TE in this Fire Zone set. If executed correctly, David's "danger player" read is Hicks and the pass is to the void, especially given Thompson did not roll into coverage as the ‘curl robber'. When the coverage is timed correctly, the safety should be in prime position for an interception. In this instance, if Ash quickly goes to his TE curl checkdown, there is a better than even chance the first down is obtained. But Ash fails to make the read, is immobilized in his decision making, and Hicks earns the sack.

Defensively, you have to be impressed with the precision of spacing and early recognition of the offensive weakness. Hicks and Cobbs stepping up is very encouraging considering the question of their ability to fill the shoes of departing seniors Robinson and Acho.

Additionally, one of Diaz basic tenets is to get off the field on 3rd down. In this case, making a stand on third and long and protecting field position gets the job done. These are the type of percentage plays that make winning games much more achievable.

Offensively, the pre-snap defensive movement created blocking assignment and "hot" read confusion. Ash and Mike Davis were nowhere near on the same page as to how to adjust a route based on what the defense is giving. To me, this is reflective reps between the two or not enough situational instruction.

Further, Jeremy Hills was focused on the play called and not reacting to the dynamics of the play in process. He might have forfeited his route and provided much needed QB protection had he been alert. The missed opportunity was quite possibly due to a lack of game situation experience. Likewise with Darius Terrell for not holding the chip block longer.

Ash had maybe all of 2 seconds to deliver a ball to the TE Terrell or to Davis on a slant. Not a lot of time to be sure. Instead, he was indecisive of where to put the ball and suffered what would have been a severe sack in live-game action. And Ash received a decent amount of instruction from Coach Harsin after the play as to properly execute a "check down". 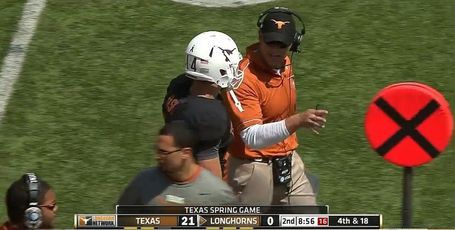 The error clearly was not taking advantage of a static set with a quick snap. More up-tempo will keep defenses honest and put him, and the offense, in a decidedly attacking advantage.

What it means for Texas

Manny Diaz recently summed up his defensive philosophy stating, "A great defense takes what is easy for an offense to do and makes it hard. There's a million different ways of doing it, but usually great defenses try to make you have to win by doing something you're not comfortable doing." If Ash is "comfortable" with a single hot-read option, then the play described above certainly put him in a bind and set the table for defensive success.

Also revealing is watching these players perform the defensive basics in their sleep. When asked what major improvement was made during spring camp, Senior safety Kenny Vaccaro stated, "I think we have the defense down to a "T" so much that we have freedom now. We can mix things up on our own and execute the defense without putting too much of a twist on it."

Longhorn defensive leaders have stated publicly that only a fraction of the Diaz library was utilized last season. Diaz confirms about his defense, "It is the easiest thing I can run." Whatever it is, given the myriad of options available, chapter two of his playbook is about to unfold. And Heaven help the Big 12 when it is totally unleashed.