Share All sharing options for: Texas Baseball Heads to Missouri For Last Time

The Tigers enter the series 23-21 and 7-11 against clearly inferior conference opponents. The record pretty much sums up Missouri baseball this season. Nice series wins over Auburn and Oklahoma State but a sweep at the hands of Oklahoma, a series loss to Texas Tech and a 15-1 loss to (a surprisingly tough) Indiana State place Missouri smack dab in the middle of a pool of mediocre.

Missouri has only one player hitting .300 or above (Scott Sommerfeld hitting exactly .300) and junior outfielders Dane Opel and Blake Brown have made up the bulk of the Tigers power this season with 16 of the team's 22 home runs. Missouri has a team ERA of 4.26 with sophomore left-hander Rob Zastryzny their most reliable starter. The Friday starter brings a 4-2 record with a respectable 3.58 ERA and good K:BB numbers (57 Ks to 22 walks). The rest of the staff has been ho-hum this year.

The Horns will counter with Parker French on Friday for the first time all season. The Saturday and Sunday starters are officially "To Be Announced" but we would expect Nathan Thornhill and Dillon Peters to get the starts. Jonathan Walsh's bat is starting to come alive again but the Horns will be without Taylor Stell for the next three weeks. Stell recently had surgery to repair his injured knee which is unfortunate because the freshman had been playing really well in center for some time before his injury. 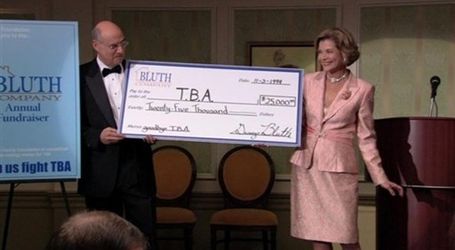 No word if Lucille Bluth will be suiting up for the Horns this weekend.

Full pitching matchups after the jump. Video appears to be available through MUTigers.com (probably in exchange for a small sum of money) and you can find the links through the TexasSports.com preview here. Join us here for the open thread as the Horns try to keep a second place conference finish alive.