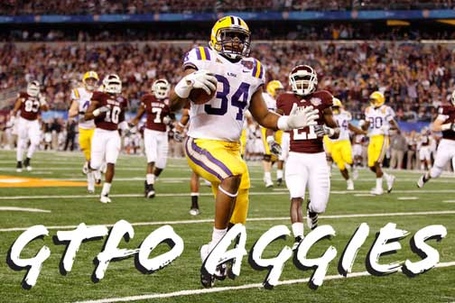 "I'm amazed you are not a better loser, after all the experience you've had."
- J.R. Ewing

We aren't dead yet. [Houston Chronicle]

"This has not been a good year for us, competitively," Dodds said. "But that's going to change."

We still have rugby.

The Aggies can't even beat an SEC teams in baseball. [SI]

Welcome to the SEC. Now go find a quarterback.

A&M is looking for a new rival. [Bleacher Report]

Put simply, Texas has been A&M's high-maintenance girlfriend for the past 117 years, always busting his balls and controlling his life. When the Aggie finally got the cajones to try a new dance hall, the Longhorns dumped him in a fit of rage, ending their longtime relationship in a snap and without a second thought.

The Aggie had, at least, found a new place to spend his time away from his psychotic ex-girlfriend. However, the new dance hall's only available girl was Missouri, as she had followed him from his former hang out location. They didn't really have any kind of true connection, making their pairing somewhat awkward.

What ever will the Aggies do if Texas wants to join the SEC? [TexAgs]

Sec is looking at expanding its geological footprint and tv numbers... Everyone already knows (based on history) that the sip fans will crawl into the woodwork if the wheels fall of their program... Which a move to the sec will almost gurantee. (hell they are doing a good job of it already in the big 12).

So should the SEC consider dealing with pompous arrogant horns for the gain of a sliver of the Texas market, a historicly sports relevant school with good academics? My guess is that dodds running his mouth is making their decision easy.

Big 12 Commish Bob Bowlsby is a man with a plan. [Lawrence Journal-World]

We're all socialists. The Big 12 shares the wealth. [AAS]

The Big 12 announced Friday it will distribute about $19 million per school in revenue from an all-time high of $190 million to league members this year and agreed to a two-year extension to keep the men's league basketball tournament at the Sprint Center through 2016.

Oklahoma State President Burns Hargis said approximately $19 million will be distributed to each member for the 2011-12 year from media-rights deals, bowl games and the league basketball tournament.

But if Notre Dame calls...[SI]

That will be a hardship and much more challenging financially for West Virginia than any of the other nine members.

The other nine members are in a loose I-35 corridor stretching from Iowa to south Texas.

The big two are the headliners in the new and improved Big 12. [Chicago Tribune]

Having lost Nebraska (Big Ten) and Colorado (Pac-12) previously, the defections of both Missouri and Texas A&M to the SEC this season leaves a pair of tradition-rich programs in Texas and Oklahoma to lead the Big 12 into this next chapter in its history. Both the Longhorns and Sooners have enjoyed a tremendous amount of success over the years, with the two combining for 11 national titles, including a pair since the inception of the Bowl Championship Series in 1998.

Furthermore, the two teams have claimed 10 Big 12 titles since the league began play back in 1996, with OU being the class of the conference with seven crowns, including four of the last six.

"We're in favor of taking the four highest-ranked teams," said Neinas, who has begun to transfer power to new Big 12 commissioner Bob Bowlsy. "We think it should be some type of selection committee operation, and how you rate a conference champion, strength of schedule must be included."

There was little news out of the final day of the Big 12 meetings, though Oklahoma State president Burns Hargis announced that approximately $19 million will be distributed to each member for the 2011-12 year from media rights deals, the aggregate representing an all-time high.

That figure includes the withdrawal fees for Texas A&M and Missouri, which join the Southeastern Conference on July 1. Part of the exit fee money was also used to finance a $10 million loan to West Virginia, which is leaving the Big East to join TCU as new members of the Big 12.

KU's Charlie Weis has a reputation for being honest. [KU Sports]

Since arriving in town nearly six months ago, Kansas University football coach Charlie Weis has earned a reputation for being honest.

At times, Weis’ tell-it-like-it-is mentality came as a surprise and encouraged players to leave KU or at least consider transferring. Other times, Weis’ approach was met with open arms, just the kind of words guys needed to hear to inspire them to dig deeper and work harder than they ever had.

It's the off-season so no time like the present to drudge up old scandals. [ESPN]

Players testing positive for marijuana in the mighty Southeastern Conference do not face the one-year suspension that comes from getting busted by the NCAA.

In the most successful league of the BCS-era, players routinely get third, fourth and even fifth chances before they're booted from the team; failed drug tests administered by the NCAA result in the automatic suspension.

But the SEC does care about concussions. [Yahoo Sports]

Everyone could start scrambling for a new conference if a 4-team playoff is announced. [SI]

While a four-team playoff is being worked on by college football officials, how the teams are picked and how a new format affects the rest of the postseason is still to be determined.

"If there's going to be significant movement by FBS institutions over the course of the summer," Emmert said, "it will be driven by that."

For the past year and a half an unrelenting firestorm of criticism has been directed at Texas Governor Rick Perry and his appointed regents for allegedly damaging, in a political scuffle for control, the excellence of the University of Texas at Austin and Texas A&M University at College Station.

There is a way for these universities to avoid entirely state political control: privatize.