During the month of June, BON authors will memorialize the final days of the UT-A&M rivalry through a series of perspectives, as seen through The Eyes of Texas, to include essays, personal reflections and commemorations of significant note.

When reflecting over the last UT-A&M football game, I remember a lot of things. I remember Ben Malena and Randy Bullock giving the Aggies an early lead. I remember Jaxon Shipley's touchdown pass to Blaine Irby. I remember the constant battles between Kenny Vaccaro and Ryan Swope. And, of course, I remember the last-minute heroics of Case McCoy and Justin Tucker.

But when looking back on that game, I also tend to think about what happened during halftime. I think about the two bands, the two formations, and the two messages that were sent. I think of my own thoughts and feelings over watching it all transpire. And, subsequently, I remember the memorable TexAgs thread that summarized the entire game and perhaps the entire rivalry.

In case you don't know, here are pictures from the performances of the bands that night. The Texas Band ended their performance by playing "Thanks for the Memories" from this formation: 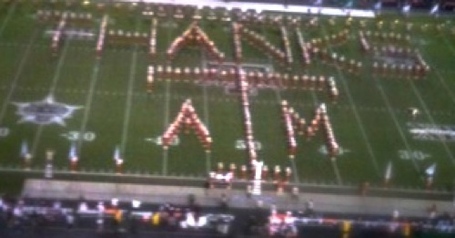 Let's compare that to a picture from the performance of the Texas A&M Band: 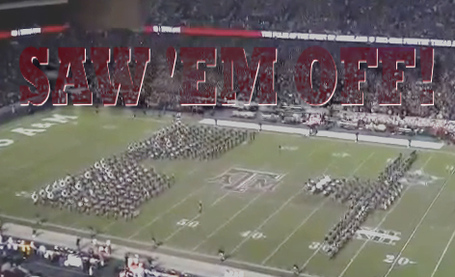 As mentioned above, TexAgs had an excellent post-game reaction to the two halftime performances. And, yes, I'll be cherry picking a few of the comments from the linked thread:

Sips can take their well wishes and stick it

Wait? Longhorns do not have class. Nor did we show them any. Quit your whining and man up about it. There is nothing wrong with innately hating another school. No matter how much they try to pretend to show "class". I almost falcon punched the hell out of the t-sip girl standing in front of me! The *****.

Screw the sips. I don't need them pissin on my leg I know what the hell they are. If you fall for their class crap you are a fool. They are just being sips and playing to the masses for points that I could care less about getting. Good to be gone from those dorky bar be que outift looking ***s.

t.u. only shows class when they are in the spot light and to cover up what happens behind closed doors and what has been reported in the media. It was a political move. I'm glad we sawed the horns off.

Ultimately, I think these pictures and comments provide a decent encapsulation over the entire rivalry, especially in the context of its abrupt conclusion. In that final game, we thanked them, they sawed us off, and then we beat them. 76-37-5.

Peter Bean is supposed to wrap up this series with an epic post, but, in case he doesn't get the chance, I wanted to provide a few final thoughts.

Even though this series was given an aggressive title, my own personal feelings mirror the final message of the Texas Band. As I've said before, I think Texas A&M is a great school, and I have both friends and family who graduated from there. I'm truly sad that the rivalry wont be continuing in the near future, and I'm glad that I got to witness a lot of signature moments involving these two teams. Next year will definitely feel different without Texas A&M on the schedule.

But, as we move forward, we will still be Texas. That will never change. For better or worse (depending on who you ask), we will always be Texas. Regardless of the other teams on the schedule, Texas will remain a school that solely defines itself by its own successes and failures. A school whose identity, brand, and overall culture transcends any singular rivalry. A school whose pride in itself overshadows any resentment it feels towards anyone else. A school with its own identity. Which, in my opinion, is exactly how it should be.