During the month of June, BON authors will memorialize the final days of the UT-A&M rivalry through a series of perspectives, as seen through The Eyes of Texas, to include essays, personal reflections and commemorations of significant note.

They say there are two seasons in Texas: Summer and Football. For better part of 12 decades, the Texas A&M and University of Texas have settled matters of the cherished football season on the gridiron. The game, for the most part, has almost always been scheduled as the last in the regular season or the very least during the Thanksgiving holiday. In many years the game determined a conference championship winner. Throughout this series we will reminisce about great Longhorn victories over the Aggies. But the football victories stand out, well, because that is what defines the athletic rivalry.

76-37-5. Those figures are not a combination to a safe. That is the all-time record against the Aggies at only one game shy of 2-to-1. Sure, there was a brief spell during the 1980’s to mid-1990’s in which A&M really did dominate winning six straight games and 11 of 15. But that was during period in which college football played like, in effect, a semi-pro league. Players got paid. Period. And Texas A&M, under the guidance of coach Jackie Sherrill for most of that time, certainly got caught with his hands in the cookie jar. But, no excuses. UT got back on track when the Big12 formed and through the rest of the series maintained a better than its historical 2-to-1 win advantage.

Otherwise, the rivalry series was more or less dominated by the Longhorns as evidenced in the following chart compiled by resident BON statistician in chief Reggieball. 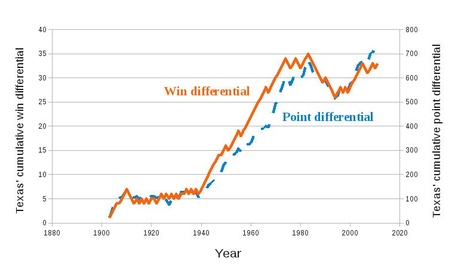 Not only is the cumulative win differential significant, it followed that the point differential is more impressive where through the heroic 2011 win saw UT outscore the Farmers in excess of 700 points.

Also note that prior to the modern era (post WWII) the match up was fairly even for 38 years with UT squeaking out a cumulative five-game advantage. But 1940 was a turning point. And who better to regale us with a tale of that particular game than BON’s venerable TexasEx and 40 Acres historical contributor, whills?

It was a lazy spring afternoon, just when things are starting to heat up, when my daughter cozied up to me and asked real sweetly, "Hey, daddy, can I go out and torture Aggies?"

It wasn't that I really minded her doing so, but with such affairs, I felt there should be a little more understanding about the underlying complexity even though such play was relatively simple in the doing. There were lots of little Aggies in the neighborhood, and my daughter was particularly adept at teasing them. However, this had greater implications.

So I said, "I have a little story to tell you first, honey. "

A long, long time ago at a place not very far away...Memorial Stadium as a matter of fact...way back in the fall of 1940 the big bad Aggies came to town. They were the Mythical National Champions and had won every single game last year and this year behind 'Jarrin'' John Kimbrough, a giant of a fullback, and a crafty old coach named Homer Norton. They'd won 20 in a row and all they had to do to claim the big enchilada one more time was beat Texas on Turkey Day. Most everyone, even Texas fans, were bettin' their drumsticks they'd do that.

Texas was coached by Dana X. Bible, and he once had led the Aggies to great victories. But he later saw the error of his ways and fled the Aggies for Nebraska, of all places. Then he left Nebraska for more money, Texas money to be exact...ain't it funny how that happens over an' over. Well, Ole Coach Bible had a plan...he was hell on planning...and he thought the Longhorns could just pop them hard right in the kisser and it might make a big different.

On the first play of the game quarterback Pete Layden completed a helluva pass to receiver Jack Crain all the way down to the Aggie 35. Ouch. On the third play of the game, Noble Doss said he could get behind his man and Layden laid it in right over his head, with Doss catching it coming straight down and did it pretty much with his eyes closed (see photo). He got knocked out of bounds on the one-yard line, and Layden ran it on the very next play. Touchdown. And with the extra point, it was 7-0 with just 58 seconds elapsed on the clock. Hit 'em hard, hit 'em fast...yes dear, that's the way. 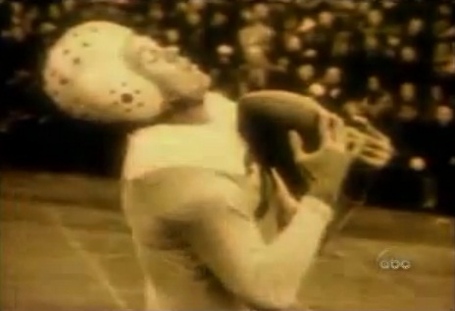 You know, honey, those Aggies strained and fought and cried for 59 minutes and 2 seconds and couldn't even get a whiff of the goal line. And you know that second mythical national championship...well, it's been 72 years and they're still moaning and howling at the moon. The truth is, sweet daughter, the Aggies are self-torturing. All you have to do is help them out a bit...and even if they win, they are just setting up more torturing for themselves. We did that the next year as well when they were undefeated again, beating them at Kyle Field, 23-0. There's such pleasure in this life.

So, you go out now and have some fun because they're not going to win a national championship anytime soon, and there still is plenty crying to be done, yessiree bob.

The recounting of Dr. Noble Doss' catch was captured perfectly in this interview.

That 1940 win spawned a 34 year period in which the Aggies only mustered 3 wins and a tie. And those wins were marked by some sort of heroic effort or bad call or combination of both as A&M only won those games by a combined score of 17 points.

But since 1970 the series returned to one of a more equal footing. Theories abound why the turn back toward a more competitive match up. One of which is the diversification of society. Much turmoil surrounded that time with the Vietnam war in full bloom, the draft and deferment, along with the great civil rights laws requiring states to comply and implement.

And no more evident was this turmoil played out on the evening news than on college campuses. With that, A&M was a fairly inoculated environment, almost sterile and certainly "old school". It was not until 1963 that the school began admitting women. And the compulsory requirement of joining the Corp of Cadets stopped only in 1965. Finally, minorities were finally allowed admission in 1970. In other words, A&M diversified. But UT was also in lock step with these transitions and it has been argued that diversification of the school lagged many others.

Regardless, as whills further illustrates, the Aggies were more successful when they had better coaches and players (Bible, Horton, Sherrill) and that certainly passes muster. Combine this with the differences in the two institutions in terms of the culture and its understandable why this heated rivalry played out on the field each autumn for 118 years.

The faces of coaches and players on both sidelines ebbed and flowed over time but one thing that Aggies will have to live with forever: We won the first, last, and a whole bunch of games in between. NOTHING can undo that fact.