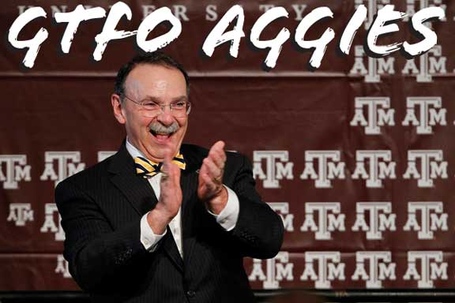 The OU Network is coming to a station near you! [Wde Right Natty Light]

Aggies didn’t know whether to cry or laugh while watching the last event Texas A&M hosted as a member of the Big 12 Conference.

It was painful enough that A&M didn’t play for the championship of the College Station NCAA Baseball Regional, but it hurt more that the teams that did were Texas Christian, which basically is taking A&M’s place in the Big 12, and Ole Miss, which didn’t even have a winning league record in the Southeastern Conference, the place A&M will call home starting July 1.

Delany said he is opposed to allowing any team that does not win its division into a future championship playoff system.

Saban, during an interview today with SECSports.com from the league's spring meetings in Destin, Fla., did everything but name Delany when explaining why he adamantly disagrees with people like Delany.

"It's self-absorbed people who are worried about how it affects their circumstance or their league rather than what's best for college football who would want to do that," Saban said. "It's not what's best for the fans because they've made it very clear what they want it to be."

The PAC 12 isn't talking about that playoff, but they have their values and principles. [CBS Sports]

Unlike other conferences around the country, the Pac-12 wrapped up summer meetings on Sunday without voting or taking a firm stance on what form of a college football postseason it will support beyond making conference champions a key component once the BCS contract ends after the 2013-14 season.

"Today we just confirmed what our values and principles are for working with others to move the BCS forward," Oregon State president and Pac-12 CEO chair Ed Ray said. "No one is talking about the status quo; I just don't hear anyone talking about business as usual."

The guys over at Wide Right Natty Light are starting their own PAC and Bevo is the target of a negative and misleading campaign. Enjoy. [Part 1, Part 2]