The 2011 Texas Defense: How does it compare?

Share All sharing options for: The 2011 Texas Defense: How does it compare?

It's fun to write about the defense because the defense is good. We are generally in agreement that Manny Diaz has done a good job. My goal is to answer the question that was brought up in the comments a few weeks ago -- how good was last year's Texas defense relative to the rest of the country? To answer this question, I've picked a handful of defenses from around college football that are considered to be the best by some standard metrics, some non-standard ones, and some I made up. I tried to include any team within shot of the top ten. It's not perfect, but I hope there are no glaring omissions. Oh and I also included Baylor, to show what a bad defense looks like. Sorry Bears. 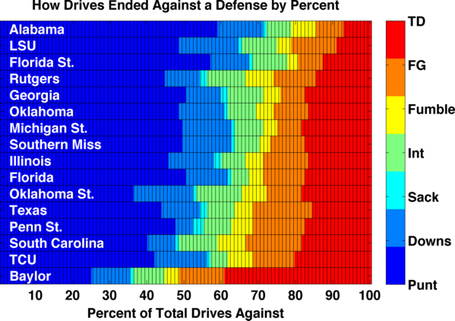 Ranking defenses by scoring. Whatever else a defense is doing, its primary responsibility is to leave the field of play without allowing a score. To demonstrate how well each team is doing this, I computed the outcome of every defensive series for the best defenses in the country, and I plotted the results in the chart above. The teams are ranked by their ability to stop TDs and FGs, with more weight given to a TD. At the bottom, Baylor was surrendering a score on over half of all defensive series against them, and forcing a punt less than 30% of the time. How unfortunate that Texas threw four interceptions against them.
After Louisibama is second tier of teams that includes Texas, which gave up a score on approximately 30% of its drives (for more details see my previous post). Of those scores, just about half were touchdowns and half were field goals, with Texas giving up a touchdown on about 17% of all drives against them. Since these numbers don't correct for drive starting position, they aren't completely illustrative of reality, but provide a general picture of how these defenses played. The broad picture is that Alabama and LSU are in a league of their own, and Texas was good but not outstanding amongst this group (of admittedly already very good squads). Within the conference, there's not a sharp dropoff from Oklahoma to Oklahoma State to TCU to Texas, but the bottom drops out far. Baylor, Kansas, and Tech (not shown) all rank worse than 100th in the country.
Playing against Alabama sucked. Looking at the play-by-play averages (see chart below), Texas is pretty much in the middle in both rushing and passing defense. Not in the middle of things is Alabama, which was nearly a yard/attempt better than anyone in both running and passing defense. The Tide gave up 4.3 yards per pass attempt. Nasty. I would be curious to see how these numbers for Alabama compare historically. Just a note -- all of these rushing numbers below correctly treat sacks as pass attempts. 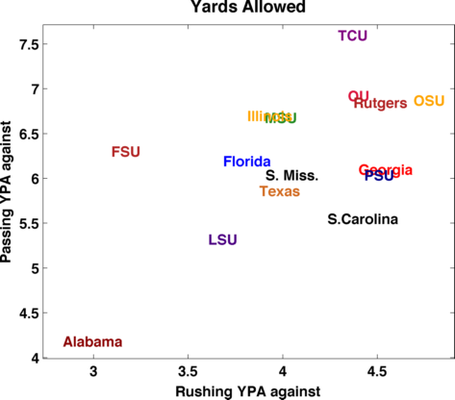 While Texas doesn't look particularly special in terms of preventing scores, really there are only two teams (LSU and Alabama) in the above chart that defend both the run and the pass better. Of course, there is so much else going on situationally in a football game not captured here. Certainly by any objective standard, under 4 yards per rush and around 6 yards per pass attempt are good numbers especially for a team starting so many underclassmen. 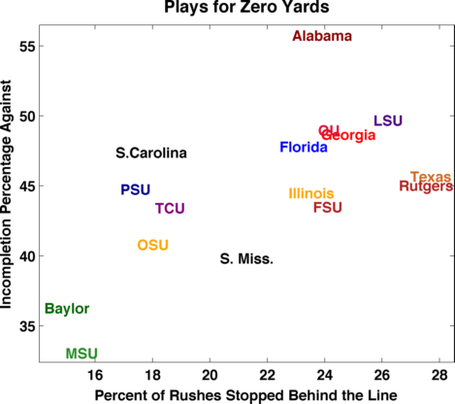 Diaz sees your running back and raises two five blitzing linebackers. I previously marveled at Manny Diaz's fire-zone's effectiveness in stopping a running back behind the line. Quoting:

My favorite statistic from this last season is that a full 20% of rushes against Texas never made it back to the line of scrimmage, and 30% went for 0 yards or less. This is an astonishing number of negative runs.

Stopping a run behind the line one-third of the time is a great way to set up long passing downs, where the strength of the defense -- the secondary -- can go to work. In fact, it turns out (see above chart "Plays for Zero Yards") that Texas was the best in the country at getting into the backfield against the run (Rutgers is close), and surprisingly effective at stopping the pass (sacks, interceptions and incompletions). Again, this is evidence of a blitzing strategy that was forged while Diaz was coordinator at Mississippi State, which couldn't hope to compete with the rest of the SEC in talent. His strategy was to gamble on killing a drive with one or two fortuitous backfield stops, sacks, or interceptions. As I see it, as a DC at Texas, Diaz has not changed this strategy much, although he now enjoys (generally speaking) the opposite talent disparity. Is this wise? That is to say, would a better strategy be to rely on the superior athleticism of Texas defenders and blitz fewer (but better) players? More on this later. 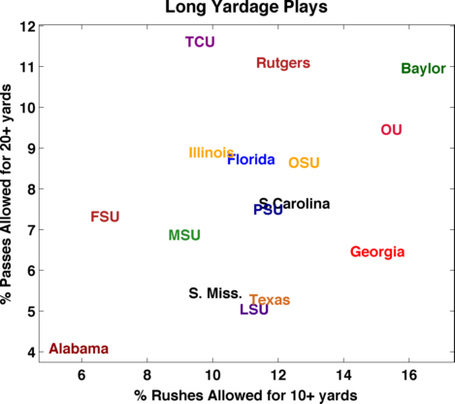 Protecting against the big play. Given the blitzing strategy, I was surprised to find that Texas is also defending the long pass fairly well (see the above plot). Looking at the same plot, Texas is perhaps less successful defending long runs, giving up a 10+ yard run about 10% of the time (again Alabama is devastatingly good at both). The trade-off for Texas in my mind is a calculated one: give up the occasional 10 yard rush in exchange for frequent stops in the backfield; that 3.8 YPC average against Texas has a lot of -3 and +8 yard rushes going into it. This is consistent with Diaz's philosophy, and combined with a competent deep pass defense, not terribly disconcerting. There's clearly a lot more going on in these numbers (situational game theory will dictate actions taken) but they gel with intuition, and I think they do tell a reasonable story.
Better competition. But, against the better teams that Texas faced (e.g. Baylor, Oklahoma State, Oklahoma), the defense was less than impressive. Baylor averaged 15 yards/attempt through the air against Texas, and would have averaged more except for that pesky endzone. Perhaps the strategy needs to be adjusted against talented passing offenses, as teams such as Baylor and Oklahoma State were able to really gash the Texas defense. For example, you'll notice that in the play below, Texas blitzes six, drops three into a shallow zone, and basically leaves Baylor standout Kendall Wright in man coverage (is that Christian Scott?!); the result is a long completion. Perhaps worth a look by people who understand moving pictures better than me.
Forecasting: Looking within the Big 12. The highest ranked SEC offense (Arkansas in yards/game) is ranked behind six Big 12 teams. Fittingly, the SEC dominates the defensive rankings over the Big 12. In order to compare between conferences, there really has to be a significant overlap of opponents (or opponents' opponents, et cetera). In college football, there isn't. For predictive purposes though, we only really need to look within a conference; most meaningful games are played in-conference, and conference schedules change little from year-to-year. In particular, last season's Big 12 round-robin schedule was perfect for comparison, as everyone played the same conference schedule. So, setting aside the narcissistic question of "who is best defense in the country", here are two final plots that show the Texas defense compared with the rest of the Big 12. 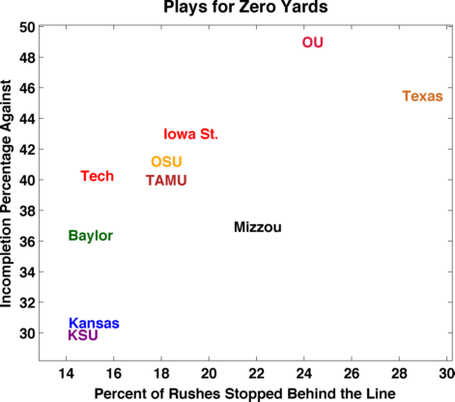 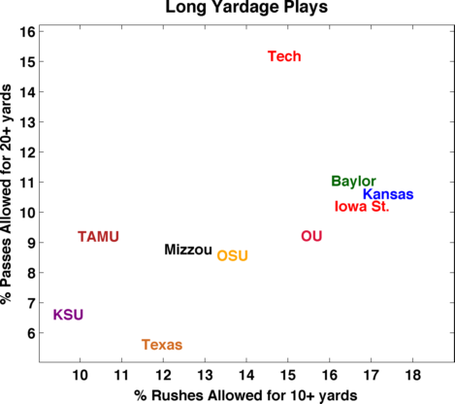 Ponder. In summary of the above two plots: Nobody stopped running backs behind the line better than Texas. Texas was also third best at preventing long rushes. Nobody stopped long passes better than Texas. Only Oklahoma defended the pass better in general and only very slightly so. Texas also had the lowest rushing and passing averages of any Big 12 team. With the caveat, of course, that Texas may just be exceedingly good at demolishing the worst offenses (Kansas, Iowa St., Texas Tech) and less exceedingly good at defending the good ones (Baylor, Oklahoma, Oklahoma St.). Besides which, a lot of the struggles of the Texas defense against good teams have to do with the struggles of the Texas offense. So, if the occasionally epileptic Texas offense can be just average, I would gamble that wins against some of the better teams that eluded us last year are very possible, even likely. At least, we should beat Baylor.