With fall camp around the corner, we open the preview season with a look at Texas' opening opponent on the 2012 Big 12 schedule.

Overview: It would have been hugely disappointing for Oklahoma State to have fallen short of last year's BCS Championship game by losing to OU in the season finale, but to miss out after having dominated the Sooners 44-10? Because of a loss the week before... to Iowa State... in double-overtime of a game that OSU led by 17 points? That's the stuff of tragedy.

So it goes, and with the window opened by Brandon Weeden and Justin Blackmon now closed, the talent cycle starts anew for Oklahoma State, who enters a transition season in 2012. The difference from previous iterations of the cycle, however, is that after a sustained run of success under head coach Mike Gundy -- with aid from capable assistants like Bill Young and Dana Holgorsen -- Oklahoma State has an established identity and, increasingly, the stable and coherent roster depth such program continuity enables.

The defending Big 12 champs have gone 23-3 over the past two seasons, finishing in the top three nationally in both total offense and scoring both years. But after losing Weeden, Blackmon and three key offensive linemen, this year the Cowboys will be relying on their defense more than ever before, as 8 starters return from a unit that was one of the nation's best units a year ago. Winning with defense isn't something they're exactly used to doing, but if it's ever going to happen, now's the time.

Offensive Personnel: There's no substitute for experience where quarterbacking is concerned, and the Cowboys are preparing to open the season starting a true freshman at QB for the first time since 1993, when a young quarterback by the name of Tone Jones won the starting job. [Ed. Drats. Had my years mixed up.] Mike Gundy won the starting job. Prior to the spring, Gundy made known his desire to name a starter heading into the summer, and after a competitive three-way battle that remained tight to the end, Oklahoma State's head coach pegged Wes Lunt as the starter-ahead of redshirt freshman J.W. Walsh, a dynamic rusher but limited passer, and junior Clint Chelf, the lone quarterback with any game experience.

The prized recruit of Gundy's 2012 class, Lunt was an Elite 11 QB invitee who won a pair of Illinois state championships quarterbacking an offense very similar to Oklahoma State's. Lunt has prototypical size for the position at 6-4, 211 pounds, coupled with above average mobility that he uses well in the passing game, and a strong arm that -- while not the ridiculous missile launcher attached to the shoulder of Weeden -- allows him to make throws to the entire field, and accurately deliver heat while on the run. After enrolling early this spring, Lunt won the QB competition in part because he proved to be the best pure passer, but also because the true freshman -- surprisingly enough -- was the one who made the fewest mistakes. Look for Gundy to roll with Lunt as his starter and every down QB, but also to develop situational packages for using the speedy legs of J.D. Walsh as a change of pace.

The receiving corps must replace all three of last year's starters, and while Blackmon is obviously the big loss, the Cowboys may find the chain-moving consistency of Josh Cooper to be similarly irreplaceable. Sliding into Blackmon's vacant spot will be senior Tracy Moore, whose transition this spring to outside receiver drew rave reviews from coaches. At the two inside receiver positions, Oklahoma State is counting on sophomore Josh Stewart to step up big in filling the role played by Cooper, and excited by the promising athleticism of JuCo transfer Blake Jackson as a replacement for Hubert Anyiem.

Oklahoma State will look to lean to its potent ground attack to help ease the pressure on the passing game. Without a passing attack that occupies as much defensive capital as did Weeden & Co. last year, the concern is that the Pokes' rushing attack may not be as dynamic this year, but with the return of Joseph Randle and Jeremy Smith -- arguably the conference's top tailback duo -- running behind another of Joe Wickline's veteran blocking brigades, the pieces are in place for OSU to have an above average rushing attack.

On the whole, however, the offense is taking a significant step back from last year, which still leaves plenty of room to be good, but makes clear why the defense is more important than ever if the Pokes plan to compete for the conference title in 2012.

Manny Diaz's Nightmare Fuel: The scariest thing about the OSU offense is how quickly things can snowball if they get in a groove. When the Cowboys are forcing you to defend the entire field with their high-paced passing game, the opportunities open up for Randle and Smith, to devastating results. When this offense is hot, you're not shutting them down. You're hoping to slow them down enough to stay in the game.

Manny Diaz's Aphrodisiac: Fresh(man) meat! Until you got used to watching it for a few games, UT's defense looked complex, but in year one Manny Diaz actually kept things relatively simple. But with a deep, speedy defense full of playmakers who are familiar with his system, expect to see year 2 M.D. feature all sorts of exotica. 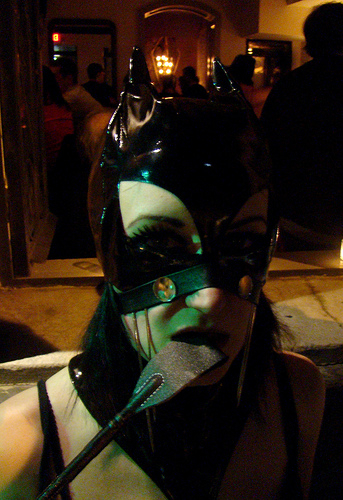 Defensive Personnel: Just looking at the traditional numbers, it was easy to underrate Oklahoma State's defense, but their statistical profile was skewed in part by inflated numbers produced by opponents desperately trying to erase big deficits against the Cowboys, and in part by their being a terrific bend-don't-break unit. Last year's defense was the best Bill Young has assembled at Oklahoma State, and the 2012 unit might be even better, depending on the ability of the defensive line to pressure the backfield.

Heading into the season, the biggest concern for defensive line coach Glenn Spencer is replacing ends Jamie Blatnick and Richetti Jones, who combined to produce 83 tackles and 19.5 tackles-for-loss in 2011. Concerned about depth at the position, this spring Spencer moved Nigel Nicholas back to his natural position on the end, after an impressive year filling in at tackle. Nicholas will share snaps at one end of the line with senior Cooper Basset, who is slotted to start after a strong spring. On the other side of the line, Ryan Robinson will start and try to build on a breakout junior season, with lightning-quick Tyler Johnson brought in to get after the quarterback on passing downs.

The interior of the defensive line is in strong shape heading into the season. Returning starter Anthony Rogers will be joined by Calvin Barnett after the junior seized hold of the other starting job with a dominant spring. There is quality depth behind the starters, with Davidell Collins looking ready to be a major contributor as a junior, and rapidly improving sophomore Christian Littlehead, who is being readied for a starting role a year from now.

Behind the defensive line may be the best back seven in the conference, with six returning starters from a year ago: all three linebackers (Caleb Lavey, Shaun Lewis, and Alex Elkins, who Mike Gundy insists are the best group he's ever seen at Oklahoma State), and three-fourths of a secondary that finished second in the nation with 24 interceptions (cornerbacks Brodrick Brown and Justin Gilbert, and free safety Daytawion Lowe). If the defensive line is able to pressure the backfield, Oklahoma State's defense will be even better than last year, led by a talented and experienced back seven that is the best playmaking group in the Big 12.

Bryan Harsin's Nightmare Fuel: The name of the game for the Texas offense this year is avoiding turnovers, and that's what this experienced group of OSU ballhawks does better than anything.

Bryan Harsin's Aphrodisiac: The one area where the Cowboys figure to take a step back on defense is disrupting the backfield, which is the first step to creating turnovers, of course.

Mike Gundy & Friends: Head coach Mike Gundy has built himself a strong, stable staff. Bill Young is back to lead the defense, as is offensive coordinator Todd Monken and OL guru Joe Wickline. This group is doing a better and better job recruiting talent, and they develop it. One of the Big 12's best staffs. 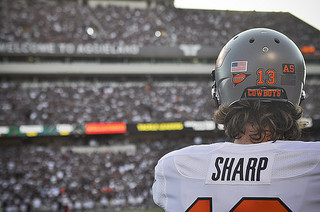 Quinn Sharp can punt and kick with the best of them. (Photo: Credit / CL)

A Random Observation about an Unrelated Topic: Last night I found out that a friend of mine just got audited by the IRS. "What crappy luck," I lamented. "Well, he hadn't filed a return since 2006," my other friend informed me. "What a f**ng idiot," I corrected myself.

OSU Best Case Scenario: The best case scenario is all about freshman QB Wes Lunt and senior WR Tracy Moore developing a Weeden-to-Blackmon kind of connection, in which case, things get interesting. If the passing game is above average, the running game will thrive, and the defense is the best its ever been. OSU may not be ready to win SEC-style games, but if the offense is putting up points and Lunt avoids turnovers, another 10-win season is conceivable.

OSU Worst Case Scenario: On the flipside, if the defensive line struggles to make an impact, the Cowboys fail to produce turnovers, and suffer the usual maladies of having a true freshman QB, they could easily go 4-5 in conference.

Degree of Difficulty for Texas (out of 10): 6.5. I have a lot of respect for OSU and have always gotten along great with Cowboys fans, but I feel better about our match up with them than I have in a while -- most importantly, because this isn't a Texas defense you want to face with a freshman quarterback. And yeah, I'm glad that we're catching them early in the schedule, because this is a team that's going keep getting better throughout the season.