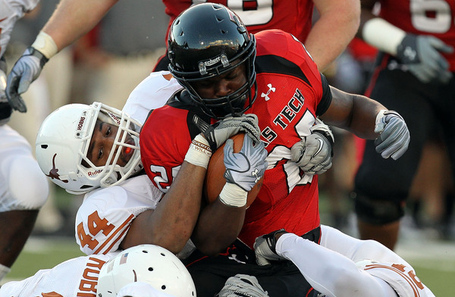 The Longhorns have two great running backs returning and another prolific tailback prospect preparing for his freshman season. Their defense should be one of the best in the country.

But all anyone wants to talk about is the quarterback.

What player can the Horns least afford to lose to injury? [Houston Chronicle]

We actually have some depth in the offensive line. [ESPN Big 12 Blog]

"Right now there are three to four guys who can come in there and with [offensive line coach Stacy] Searels, you never know where any of them might play," Walters said. "But you know they will be ready."

We're not fun? Texas did not do so well on the fun scale. [SB Nation]

Parity has arrived on the conference scene. [NewsOK]

Yet in a league with such prolific offenses, a defense can make the difference and one person, or a few of them, can make it happen. When the Walter Camp Award preseason watch list came out and listed nominees for college football's player of the year, four of the Big 12's 11 candidates were defenders. Only the Southeastern Conference, steeped in a defensive tradition, could match that number.

He is only thinking about the fans. Mike Gundy on a playoff: [NewsOK]

"I think so, as much as I know about it. There’ll be a committee that’s formed to make decisions. It’s going to generate a ton of interest across the country. Now the fans have two games to watch and one final game, so it’s going to make more money. The presidents and the conferences will be fired up about the money. The fifth team will now be upset like the third team was this year.

Just how good is the Sooner offensive line? [ESPN]

We just call this a typical Land Thief off-season. Here are the so-called Sooner roster mishaps. [Crimson and Cream Machine]

The kicking game is crucial for the Mountaineers. [Saturday Gazette-Mail]

Not only does West Virginia begin practice Thursday with a rather, shall we say, inconsistent group of kickers, there are also new rules to follow.

Poke cornerback Justin Gilbert could have a breakout season this year. [NewsOK]

The Big 12 just looks better every day for our two newest members. [The Smoking Musket] 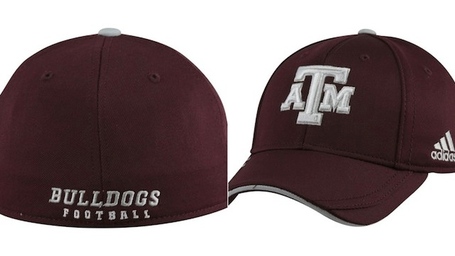 In case you missed this. [Deadspin]

The Aggies just don't get any respect. [NBC Sports]

Speaking at an event in Houston this week, and with his tongue buried deep in his cheek, first-year A&M head coach Kevin Sumlin lamented the lack of respect he felt his squad received during the SEC media days earlier this month.

"Guys, based on every question I got, they don’t think we have any defense. They don’t think our offense will work, and we don’t have a quarterback or kicker. Other than that we have no problem guys," Sumlin told the crowd according to the Bryan-College Station Eagle.

You will like Ryan Swope after reading this story. [Fox Sports]

Can a coach deal with recruiting limits and rebuild a program? [NY Times]

One problem solved, but oh so many to go. [The Battered Fan]

Last evening, a presidential oversight committee approved a four-team college football playoff system that will begin in 2014 and run until 2025. Fans everywhere rejoiced over the burial of the uber-flawed Bowl Championship Series (BCS) and seemed genuinely excited for the implementation of this new system. While the creation of such system fixes one notable problem, it only highlights another: college football players not getting their fair share of the financial pie.

Jerry Jones thought of everything. The Cotton Bowl (Arlington) has a great chance to host one of the college football playoffs. [AAS]

One more reason the Cotton Bowl game in Arlington stands a great shot at hosting a national championship and semifinal games is the availability of all its 360 luxury boxes, because those who bought personal seat licenses for Cowboys games do not include the rights to those seats or luxury boxes for the college playoff games or Super Bowls. "The suite holders get the right to buy tickets (to those events) but not necessarily in the suites they have," said Tommy Bain, chairman of the Cotton Bowl Athletic Association. "Apples to apples (same ticket prices for all bowl games), we have more premium seats than any other bowl."

Surprise, surprise. Guess who is closing in on the broadcast rights to the playoff? [NBC Sports]

The Heisman Trophy campaign is a crass act. [Boston Herald] 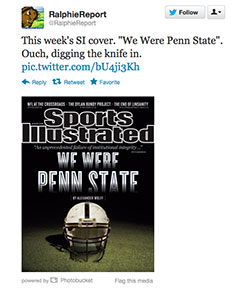 Did Penn State fans have a blind devotion to Joe Paterno? [CBS Sports]

There are valuable lessons to be learned, people. [CBS Sports]

USC may have committed yet another NCAA violation. [The Hour]

"The timing that all this has happened is unbelievable," Edwards said.

It's a sentiment that has been echoed by others who wonder if the timing of the hire and the signing of the nation's top high school prospect might be a bit more than coincidence.

Edwards Jr. committed early to FSU, but by October of last year, his loyalty began to waver.

Penn State may be getting some financial help from an unexpected place.

Alabama fan Alston Noah is trying to raise money to help Penn State after the recent penalties placed on the school by the NCAA, which included a $60 million fine that will be donated to charity.

I'm sticking with a countdown to the season. Yes, I probably need a life, but it is better than watching baseball. [The Crystal Ball Run]

Obviously, I wouldn't be sitting here typing this right now if I didn't love football. I used to play up that shtick, but I had an epiphany at some point in the last couple years. Truthfully, that whole bag about "my life is empty without football" is just kinda pathetic. Yeah, football season is great and all, but, like, I have a life. I'm not going to waste the limited number of minutes that I have to live counting them in anticipation of the start of football season.