Share All sharing options for: Bevo's Roundup: 17 Days To Go

How is the Texas brand doing? [ESPN Horns Nation]

The Longhorns, never fledgling mind you, have become the wealthiest program in college sports. All the while entertaining a myriad of suitors before ultimately flexing their muscle and pulling a conference together, launching a $300 million network with ESPN and, don’t forget, wondering if they might ever get another quarterback.

Texas sold more merchandise than any other college program in the national championship year of 2005.

Texas also sold more merchandise than any other college program in 2010. That year the Longhorns went 5-7, their first losing record since 1997, or the year before Brown arrived.

The Horns have issues in the red zone. [ESPN Big 12 Blog]

And they might want to cut down on those turnovers. [Dallas Morning News]

Oklahoma isn't living up to their standard. [ESPN Big 12 Blog]

By Oklahoma standards, 2011 was an utter disaster. The Sooners lost leading rusher Dominique Whaley, then leading receiver Ryan Broyles before eventually careening off the road in November. And even then, the Sooners still won 10 games.

The Sooners want to be just like us. [Crimson and Cream Machine]

What can the Land Thieves do to help an ailing o-line? [Crimson and Cream Machine]

A longhorn tries to figure out what new defensive coordinator Mike Stoops is up to. [Crimson and Cream Machine] 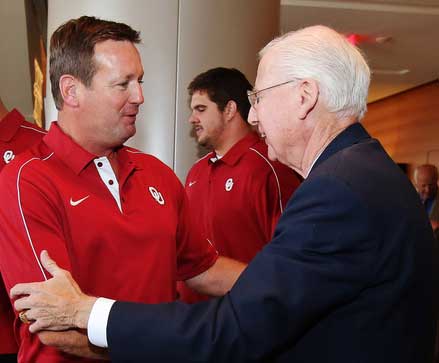 "Our group has to understand, you have not arrived just because we got to the Big 12," coach Gary Patterson said. "Being in the Big 12 doesn’t make you special. Winning makes you special. That’s how we got back to this point — winning."

"Our second-team offense looks terrible. They look awful. That's what we're dealing with on offense where you put the second team in and you have a bunch of true freshmen. They don't need to act like true freshmen, they need to get better. Defensively, it's the same thing, but we're not having to put a bunch of true freshmen in on the offensive side, we're having to put freshmen in on the defensive side, and they need to keep getting better like our second team."

It has been a mass exodus in Stillwater. [NewsOK]

You can't write off the Pokes this year. [ESPN Big 12 Blog]

Everyone wants to pretend they can write off Oklahoma State without Weeden and Blackmon, while conveniently overlooking that just about everyone else on the team comes back, especially on defense.

Can anything help the Kansas defense? [Big 12 Sports]

How bad was the Kansas defense last year?The answer to that question isn't open to debate.

Kansas was ranked 120th out of 120 teams in FBS football in scoring defense and total defense. In five of the Jayhawks' nine Big 12 losses, they allowed 30 or more points. In a non-conference loss to Georgia Tech KU allowed 66 points and that followed allowing 42 points in a victory over Northern Illinois.

What are the must-see games this year? [Athlon Sports]

The Aggies went to the SEC to establish some sort of expand their brand. [ESPN]

"It's interesting that part of our deliberations in the conference move, we never did talk about what our football record was going to be in 2012," said Jason Cook, Texas A&M's vice president for marketing and communications. "This was truly a brand move for Texas A&M. Just like the University of Texas wants the Longhorn Network to expand their brand, we believe that the move to the SEC provides the opportunity to expand the Texas A&M brand on a national level."

Recruiting in Texas will be an issue for the Aggies long-term. [ESPN Big 12 Blog]

When Nebraska and Missouri announced their intentions to leave the Big 12, I predicted both would have to give up their recruiting pipelines as the price for exiting the league.

It won't happen all at once, and may never entirely dry up, but the truth was, neither team would be able to draw out as much talent from the state when they left.

I never believed that would be the case with Texas A&M, with its campus obviously inside the state, though I do believe Texas A&M's recruiting will take a hit if the Aggies don't win consistently in the SEC West, and I don't believe they will over the long term.

College football has been Sabanized. [SI]

Arlington and New Orleans are the favorites to host the new Champions Bowl. [ESPN]

This guy should stop talking to his mom during the season! [USA Today]

We should blame the system for the Honey Badger's demise. [CBS Sports]

So, football does have an impact on academics. [State College]

It's time for North Carolina to pay the piper. [CBS Sports]

How many athletes were given free grades from the Department of African and Afro-American Studies? We don't know. UNC never wanted to find out, but the school has no choice now. The school mustered a halfhearted search for the truth earlier this year when it found those 54 tainted classes, but its search went back only to 2007. Despite efforts from the Raleigh News & Observer that suggested otherwise, the school held firm that the academic fraud started in 2007.

Why did Allen, Texas, build a 60 million dollar stadium? [Forbes]

Just add this to the list of football fashion faux pas. [SB Nation]