Share All sharing options for: Texas Longhorns Open At No. 15 In AP Top 25

[Update]: If you're wondering how likely it is to get the first 15 spots exactly the same in two preseason polls without cheating or bias, click through for my analysis. (Spoiler: it's pretty unlikely) -Horn Brain

Oh, those copycat writers. The Texas Longhorns debuted at no. 15 in the preseason AP Top 25, exactly the same ranking as the one bestowed upon the 'Horns by the coaches several weeks ago.

For a team with a high ceiling, but a relatively low floor, the ranking by the coaches seemed like a fair assessment at the time and no doubt remains so several weeks later with nothing too disastrous happening to the football team since then, except for multiple injury scares that should not be too significant -- as long as new kicker Anthony Fera can get his groin injury healed, that is.

Head after the jump for the full rankings.

You see, we engineers often struggle with the word "and". Take NASA's landing of the Curiosity rover on Mars this month (I will never stop plugging this. Woo, Caltech and JPL!): What was amazing was not that (1) the hypersonic guided entry worked, or (2) that the parachute opened and inflated on time, or (3) that the radar was able to find a suitable landing site, or (4) that the sky crane control scheme successfully dangled a couple billion dollars worth of nuclear-powered robot from a cable before gently depositing it on the surface of another planet with no human intervention; the amazing thing is that 1, 2, 3, and 4 worked, along with effectively countless other intermediate steps, each cutting the probability of success by its own fraction of reliability.

With that in mind, hopefully it makes more sense to the English majors out there (sorry, Wescott, had to pick someone) that, as an engineer, the idea of two completely different populations of voters with different biases and access to information managing to exactly match their first 15 selections (1 and 2 and 3 and...) without a single game ever being played sets off every one of my BS detectors. The only difference is explained by the departure of The Honey Badger from LSU in the interim. To investigate, I looked all the way back to this graph, showing an estimate for the average uncertainty in a ranking from the BCS (You may remember this from my first post on BON). 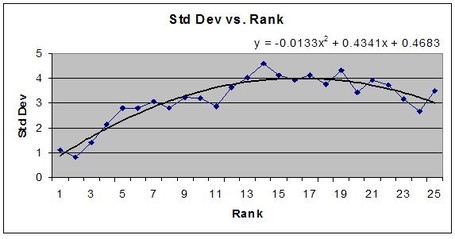 The obvious conclusion is that the polls are not independent, the poll that comes out first sets an expectation, and except for a few intentional disputes, subsequent polls will largely imitate their predecessors. People just aren't good at handling all of this data and making consistent deductions from it; the tree of consequences that must be searched is just too complex to find all of the inconsistencies in an individual's rankings, so we assume that what we've seen before is mostly right in an effort to ignore the fact that we have no hope of solving the problem.

The big problem with this is that it makes preseason polls matter. We see this perpetually in football, where Teams A, B, and C are all undefeated or have similar records, but Team A and B are ranked above C because C started off low in the preseason polls while A and B were expected to be title contenders. This "ranking inertia" is considered a problem by most thinking persons, but it is actually programmed into Richard Billingsley's horrible computer ranking intentionally. As nearly as I have been able to tell, this is because his brain has been almost completely replaced by an organ of similar structure, but whose sole function is to provide him with an endless supply of self-assuredness in the face of being proven over and over again to be a complete nitwit.

When the new format finally arrives involving a selection committee, I hope that the committee studies these effects and encourages its members to account for this subconscious bias in their decisions. That, however, would be something that I would do, and therefore will undoubtedly turn out to be highly unpopular.