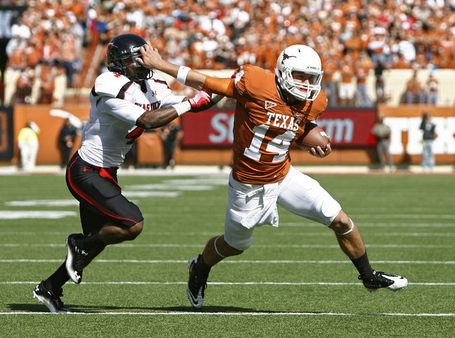 David Ash on getting the starting nod: [AAS]

With 15th-ranked Texas' opener Saturday against Wyoming on the horizon, Ash met the press Monday for the first time since earning the starting job over Case McCoy. It was a classic Ash performance — interspersing a few one-word answers with an occasional Biblical reference while keeping a mostly inscrutable poker face.

For example, Ash was asked why he feels he is ready for the starting job.

"I don't know. Because I can play football?" he replied. "I can play quarterback as good as anybody else."

"This is a point-driven league," Brown said. "We averaged in the upper 20s last year (28.1 points). That's not enough. The year we won the national championship, we averaged 50 and averaged 40-plus a long time. We have to get back to those numbers."

"We've got to do a better job of producing explosive plays," Brown said. "You can't just run the ball for 4 yards a play and win all the games. ... We've got to create more explosive plays in the passing game, which would come from the quarterback position."

Just win them all. [AAS]

Mack didn't guarantee a 12-0 finish — he knows better — but he just has the look of a coach expecting big things only two seasons after his worst year as a head coach.

He also had a message for guys like me who see this year's Longhorns as a 9-3 team.

No, Mack Brown's job is not in jeopardy. [San Antonio Express-News]

Coach Brown is the program. [MBTF]

The conference is still working on the network deal. [Tulsa World]

But now, five days from kickoff, the deal remains unsigned. So does the grant of rights.

"Yes there are holdups," Bowlsby said. "We have ESPN, Fox and the conference as the three parties to this contract. We are also in the process of wordsmithing with 10 presidents, 10 general counsels and 10 athletic directors, all whom virtually have editorial veto power over the document.

"At times, I have to admit that we were a little bit of a dog chasing its tail."

There are big expectations for Landry Jones. [Tulsa World]

Landry Jones has one big goal this year. [Tulsa World]

"It's going after that national championship," Jones said. "We've had some success around this place. With me at quarterback, we haven't yet been able to get to that big game. We've had some stumbles usually in the regular season that keeps us from that.

"I think that's a stepping stone that I want to take and I want to be able to accomplish in my career."

The UTEP players are trash talking the Sooners. [NewsOK]

Who has the best offense in the conference? [ESPN Big 12 Blog]

Television provides the monetary bricks that has built college football into a business. As television contracts have swelled to upward of $5 billion for just one conference, concepts of amateurism and education have loosened, and the sport treads on a prosperous but dangerous path.

"It's clearly the most powerful entity," said Ellen Staurowsky, a Drexel University sports management professor and co-author of "College Athletes for Hire: The Evolution and Legacy of the NCAA Amateur Myth." "The pressure that schools are under to maintain a competitive edge hinges on their ability to have exposure on television."

This has been a year of unprecedented change. [SI]

"Sweet Caroline," which is a big fan participation song during games, is being cut because of the lyrics, more specifically the line "touching me, touching you."