Share All sharing options for: Bevo's Roundup: 25 Days To Go 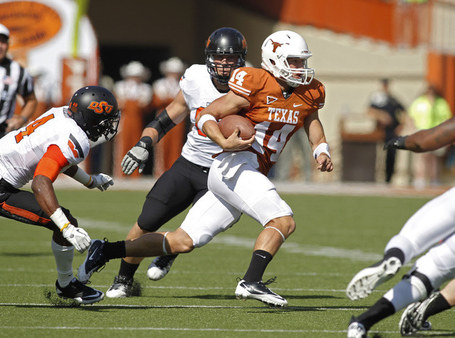 There are still lots of questions to be answered. [Houston Chronicle]

Shouldn't this kind of hate be reserved for Notre Dame? [Ft. Worth Star-Telegram]

Never ceases to amaze how the Horns can be mediocre and routinely generate such expectations.

Mountaineer coach Dana Holgorsen has a message for his team. [West Virginia Illustrated]

"We told them we're going to handle expectations like we did last year going into the Clemson game. We didn't care what you guys wrote or what the media was saying on TV," Holgorsen says of the weeks leading up to January's Orange Bowl. "It's the same thing now, expectations are high which we like, but we're not going to pay attention to it. How you handle expectations is you just do your job."

Will those reinstated Land Thieves make a difference this season? [ESPN Big 12 Blog]

Shouldn't that be delusions of grandeur? [SB Nation]

"As a coach, you can't be thinking like that. What coach in their right mind would be thinking, what if we can just win four games? If so, then you hired the wrong coach. I might have illusions of grandeur, but my expectations are way higher than yours are, I can promise you, because that is what they are supposed to be. That is what they are paying me for." - Charlie Weis

Baylor has their starting QB—sort of. [San Antonio Express-News]

Bill Snyder has won a lot of games with that slow and steady offense. [Washington Post]

"We’re a team that’s usually going to use the clock in that fashion — huddle, come to the line of scrimmage, let the clock run down, snap the football," Snyder said at media day on Friday. "We can go as fast as we want. We don’t have to huddle. We can do it like every other team does. It’s just kind of what suits our needs."

Is that an omen? [Houston Chronicle]

About 20 miles outside College Station, driving north on Texas 6, you see a billboard proclaiming, "This is SEC Country.''

There is not much to see at that point in the journey except for the billboard, making it look a whole lot like Big 12 Country or, for those of who you remember, Southwest Conference country.

There are, however, buzzards circling above the pastures.

When all else fails, just increase the size of the committee. [ESPN]

"Coaches come to me and say, 'I feel like a chump. I'm trying to do things the right way and I have peers who laugh at me because I don't play the game and bend the rules the way they do,' " board chairman Ed Ray said in a statement released by the NCAA. "That's got to stop ... Most coaches are terrific people who love their student-athletes, try to do it the right way, try to have the right values and succeed. They're very frustrated. This has got to stop. I think most coaches are saying it's about time. We want a level playing field."

The plan calls for changing the current two-tiered penalty structure of major and secondary violations to a four-tiered concept, increasing the size of the infractions committee from 10 up to 24 in an effort to speed up the enforcement process and holding coaches individually accountable for any violations that occur in their program.

The NCAA is cracking down. [Sporting News]

Woo-hoo! It is August! Band and football practice aren't far away. [Ft. Worth Star-Telegram]

It is a kinder, gentler bowl eligibility. [Every Day Should Be Saturday]

Atlanta wants to be the capital of college football. [CBS Sports]

The SEC has the advantage in the USA Today Coaches' Poll. [Poll Speak]

The Penn State scandal could have serious consequences for the local economy. [NY Times]

Sometimes it is better to stay silent. [AL.com]

The Paterno family is only concerned with their father's legacy. [CBS Sports]

According to the letter, the Paterno family wants to soften "the enormous damage done to Penn State, the State College community, former and current students and student-athletes, Joe Paterno and certain others involved, as a result of the unprecedented actions taken by the NCAA."

That's what this was all about -- those 409 victories, a number reduced to 298 after the NCAA vacated the wins from 1998-2011. The Paterno family probably wouldn't mind if the school didn't owe $60 million in fines, didn't miss the next four postseasons, didn't face massive scholarship restrictions.

The NCAA's response to the Paterno family? [LA Times]

And the really stupid

Craig James would like your help. [Ft. Worth Star-Telegram]