Around the Big 12: Ricky Seals-Jones, OU Football, and Billy Gillispie

Share All sharing options for: Around the Big 12: Ricky Seals-Jones, OU Football, and Billy Gillispie

Ricky-Seals Jones opened up his recruitment, then hurt his knee, and as of tonight Texas is walking away... How far would you go for quality information about an opponent? And can a Texas fan embrace anything involving Teddy Lehman?... And Texas Tech strikes back at Arkansas to pull neck-and-neck in the coaching scandal wars.... Read on and join me for a tour of the news in Big 12 country. 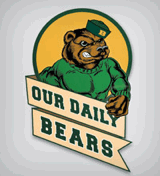 Why did Texas bail on RSJ? Why now? Tonight's reports that Texas is no longer recruiting Ricky Seals-Jones managed to be both surprising and -- at least to this more casual recruiting observer -- not altogether unexpected. Irrespective of whether the drama is indicative of a legitimate problem with the kid or just run-of-the-mill recruiting rumor-drama, the less smooth and clear cut the recruitment, the greater the chances that he won't be playing for Texas, either because the Longhorns move on or get beat out.

So what happened in this instance -- why is Texas moving on from Seals-Jones right now? Mark Moore, lead blogger at Our Daily Bears, penned an interesting post contemplating precisely that question, laying out what he considered the five most likely explanations, which I'll paraphrase as follows.

First, it's entirely possible that Texas isn't so much done with RSJ altogether as sending a clear signal that he either needs to get back on the Dream Wagon right now or Texas will move on. Second, Texas may have diagnosed his injury as being more serious than most reports indicate -- sufficiently so to end their interest in pursuing him. Third, it's possible that the Texas staff concluded that RSJ was not going to sign with Texas and bailed early to save face (the "I quit, you didn't fire me" gambit). Fourth, Texas may believe that RSJ's recruitment isn't fully above board (think, walking away from Lache Seastrunk). Or fifth, perhaps Texas decided that they like someone better.

Ultimately, Mark admits that he's as perplexed by the turn of events as Wescott is, and while I don't follow the rumor mill closely enough to offer anything other than speculative reasoning, I agree with Mark that the fifth option (liking someone better) is unlikely, and would add to that list the third (bailing to save face), as well -- as Mark notes, the timing is odd in a way that suggests something else. My guess is we'll learn more with time, but for now, Ricky Seals-Jones is up for grabs, and if he's able to recover to full strength and isn't involved in something shady that winds up derailing him... someone other than Texas is going to get themselves a hell of a football player, and the hands-down best athlete in the state. 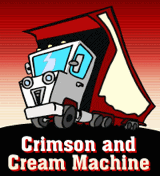 The Price of OU Football Updates. I almost can't believe I'm about to type this, but... Oh man, this is just as hard as I thought.

Okay, here goes: I recommend that you head over to Crimson and Cream Machine to listen to their weekly podcast, with special guest.... CAN'T. SAY IT. ... with... with special guest Teddy Lehman. /throws up violently

I know, I know. I KNOW. And yes, I'll warn you in advance: they talk about The Play Which Shall Not Be Mentioned. Yes: that play.

But if you can stomach the painful parts, if you're looking for a great primer on OU football through two weeks, you couldn't do any better than the 90-minute rundown on the Sooner Nation Replay podcast. And hey, if need be, just skip past the opening segment with Teddy Lehman. Because the rest of it is really great stuff, and while like every UT fan my DNA is programmed to hate all things OU, the fact of the matter is that there's no place better to go for a team diagnosis than its own fans. And that includes your hated rival.

Along with getting Lehman's thoughts on OU's early season performance, the C&CM crew dive into detailed breakdowns of the team -- strengths, weaknesses, critical areas for improvement -- pretty much everything, and all of it with that intimate knowledge only a team's diehard fans possess.

It's 1:18 AM and OU still sucks... but with the Red River Shootout just one month away, it's officially time to bookmark Crimson and Cream Machine, if you haven't already. 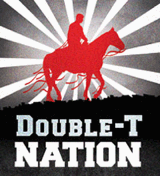 Only At Texas Tech. This is only tangentially related to football, but Texas Tech is embroiled in another surreal coaching saga, this time involving head basketball coach Billy Gillispie. When news broke that Texas Tech had hired the former A&M and Kentucky head coach to take over in Lubbock, I'll admit to concluding that the Red Raiders had made a savvy hire. Now, don't get me wrong: I knew there were clear risks, but they were very much just that -- clear risks that allowed Tech to go into the situation with eyes wide open -- and for a basketball program without much history and perennially hamstrung by one of the most challenging hoops recruiting locales in the country, it seemed to me that Tech was making a favorable calculated gamble.

The golden rule of betting is that you don't second guess your decision if you played the odds right, but boy is it hard not to when you go bust. And the Billy Gillispie hire has officially entered into dramatic territory unseen since... well, I was going to say Mike Leach, but Bobby Petrino did the most Bobby Petrino thing ever (what is it with coaches at Arkansas and Texas Tech?)... Anyway, yeah: the Gillispie hire has blown up in ways that make it similarly difficult not to yell at Tech, "What in the hell were y'all thinking?!"

Double T Nation (soon to be renamed Viva El Matadors) provides the update on the latest with Gillispie situation, which Seth decides is "the strangest thing [he's] seen in a long time." After being confronted with a fresh round of allegations of both verbal and physical abuse of his players -- along with a fresh round of alleged NCAA infractions -- Gillispie ducked out of Lubbock altogether last week and checked himself into the Mayo Clinic.

And after waiting days for any kind of official word from Tech officials that Gillispie was, you know, fired or something, when on Tuesday Athletics Director Kirby Hocutt finally released a statement, if anything Gillispie's future with the program only became less clear, as Hocutt announced that there would be an interim head of basketball operations, while wishing Gillispie a full recovery.

On its face, strange indeed -- even for Lubbock. Except that's also just the thing -- this is Texas Tech, and this approach could come from one place and one place only: lawyers. Lawyers generally, and lawyers who just went through an uncannily similar divorce with the football coach just three years ago specifically. The chances of Gillispie coaching another game at Texas Tech are only nominally non-zero -- legally non-zero, you might say.

But he's done. And whatever intricate dance the university's general counsel insists upon, one way or another, Gillispie not only has coached his last game in Lubbock, but maybe anywhere.

Because while Americans love nothing so much as a comeback story... you only get so many chances. And I won't be the least bit surprised if this time Billy Gillispie's gone bust for good.