How the Longhorns sprung Jonathan Gray for 38 yards on 3rd down and 10.

There were a handful of plays in the first and early second quarter on Saturday that told you that it was going to be a very good day. That Texas had come to play.

The Whaley pick six was one.  Marcus Johnson's 59-yard touchdown reception was another. And in between those two plays was a third: Jonathan Gray's 38-yard run on a lead draw play to convert a 3rd down and 10.

It was a terrific call by Major Applewhite, and beautifully executed by the Longhorns' offense. Although Texas would eventually turn the ball over on downs when Case McCoy couldn't find Alex De La Torre on 4th and 2 at the OU 23, it was another successful drive that made clear that the Texas offense was in business. Let's take a look at how Gray broke free for the big 3rd down run.

As the ball is snapped, you can see that Applewhite has made the perfect call here. The Sooners are only rushing four and dropping seven into coverage, giving Texas the look it wants in the middle of the field. 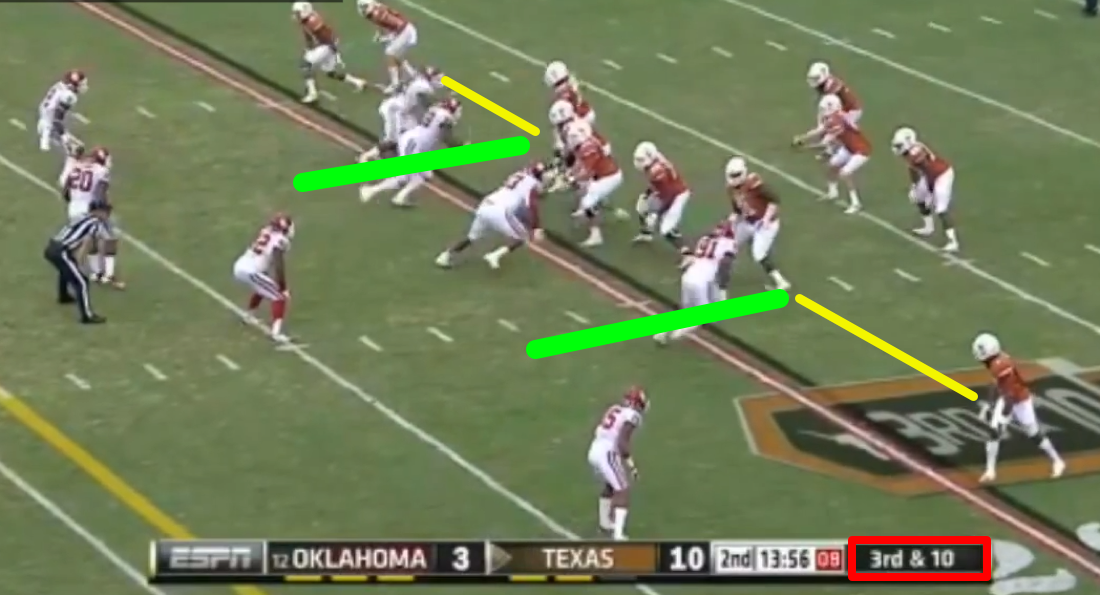 As Gray receives the football, you can see why the play is set up for success.  Both Donald Hawkins and Kennedy Estelle allow their defenders to get up field, sealing the inside. With Dom Espinosa and Malcolm Brown free to lead the way as blockers, the play will succeed if Mason Walters and Trey Hopkins are able to engage the tackles and seal the running lane in the middle for Gray.  Walters' assignment is easy due to his tackle lining up outside in a 5-tech position. The real challenge is for Hopkins, who will have to turn his tackle to seal the hole. 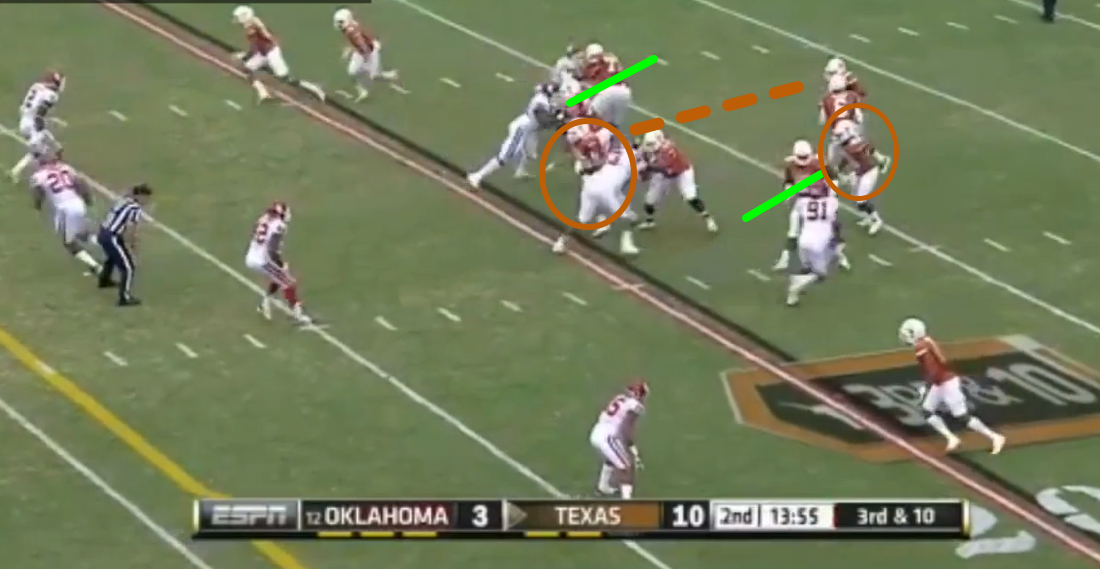 Shaded below you can see the key block on the play, as Trey Hopkins has managed to turn the tackle, sealing the rushing lane for Gray right up the middle. 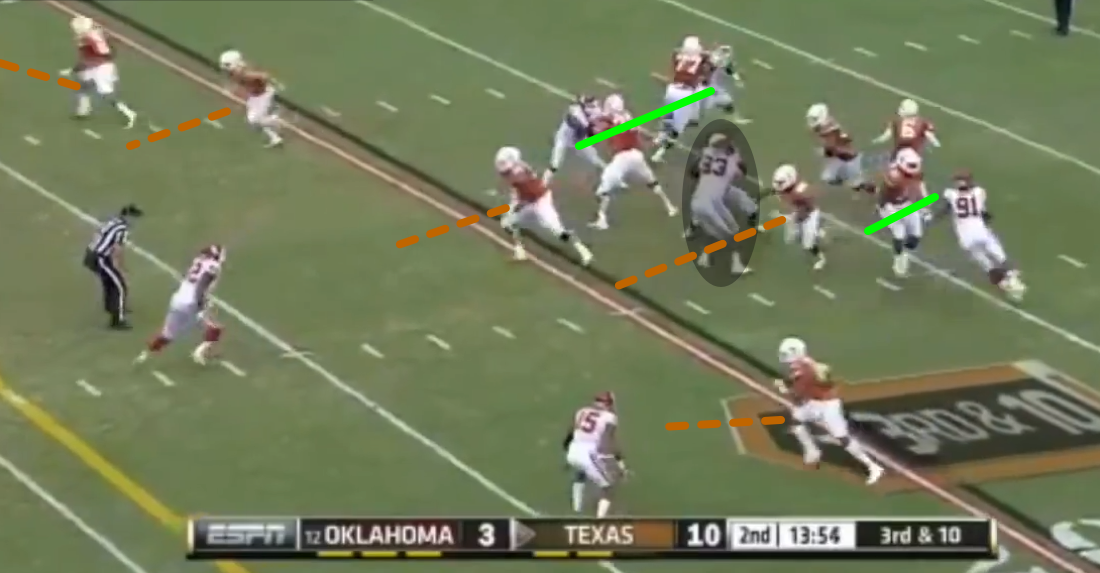 Now it's just a matter of whether Texas' downfield blocking comes through. 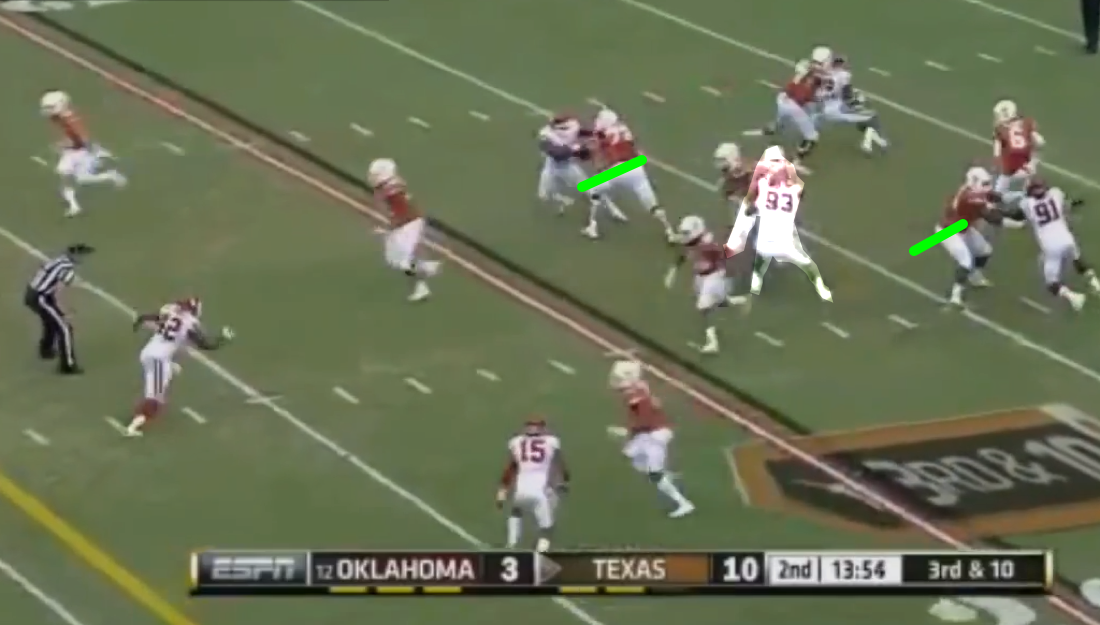 Gray reads his blocks and makes a strong cut to his left, where he'll run behind the block of Malcolm Brown.  He has a man to beat, however, because Mike Davis leaves Zack Sanchez (#15) unblocked on his way to engage another Sooner in the secondary. 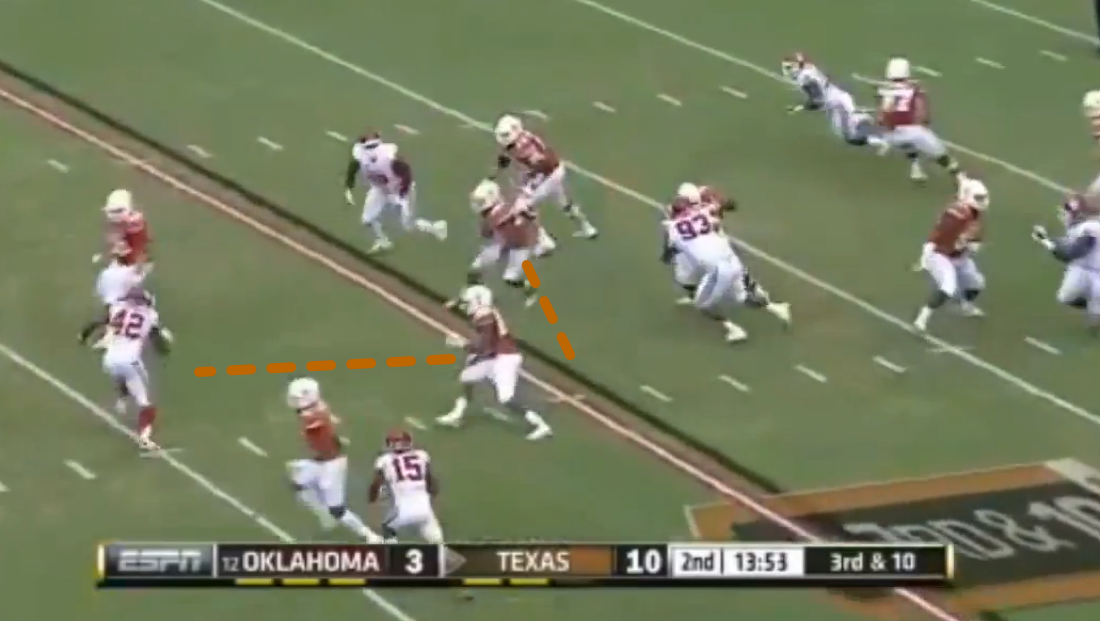 At this point it looks like the Sooners are going to limit Gray to a 5-yard gain, forcing Texas to punt. 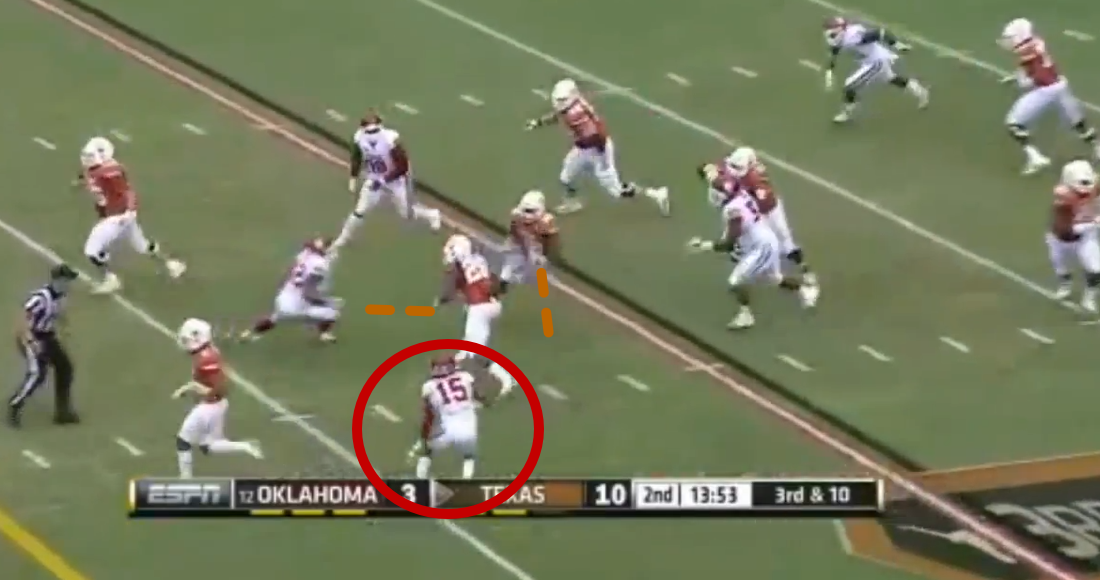 Except Sanchez apparently watched a little bit too much film of Texas, as he engages in everyone's favorite defensive move... 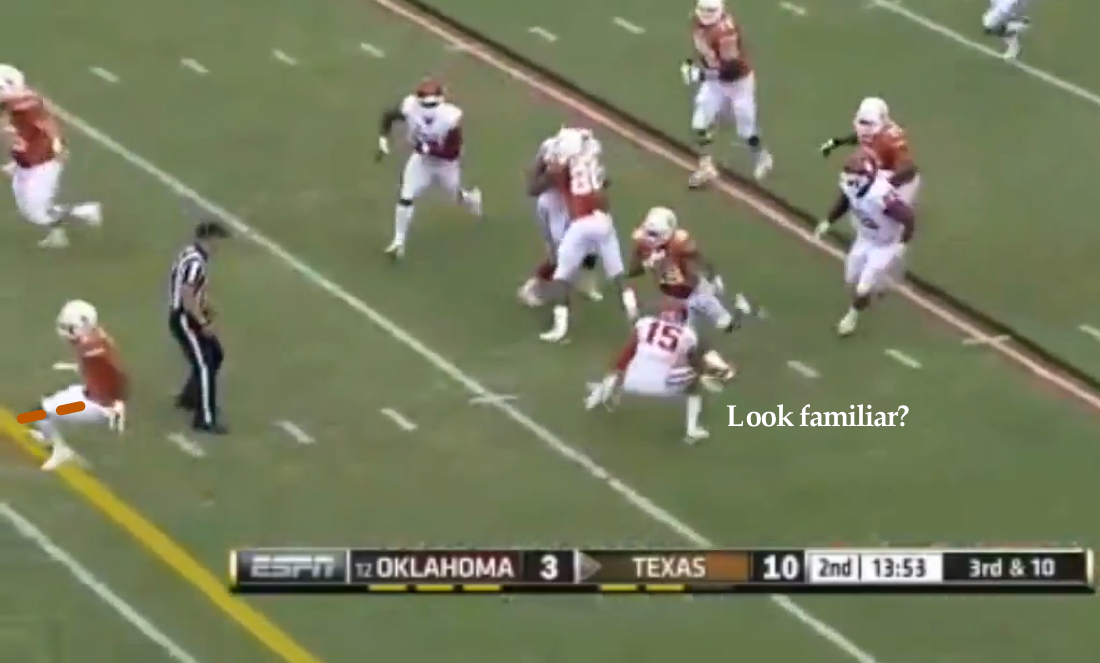 The matador!  Wave as they go by! 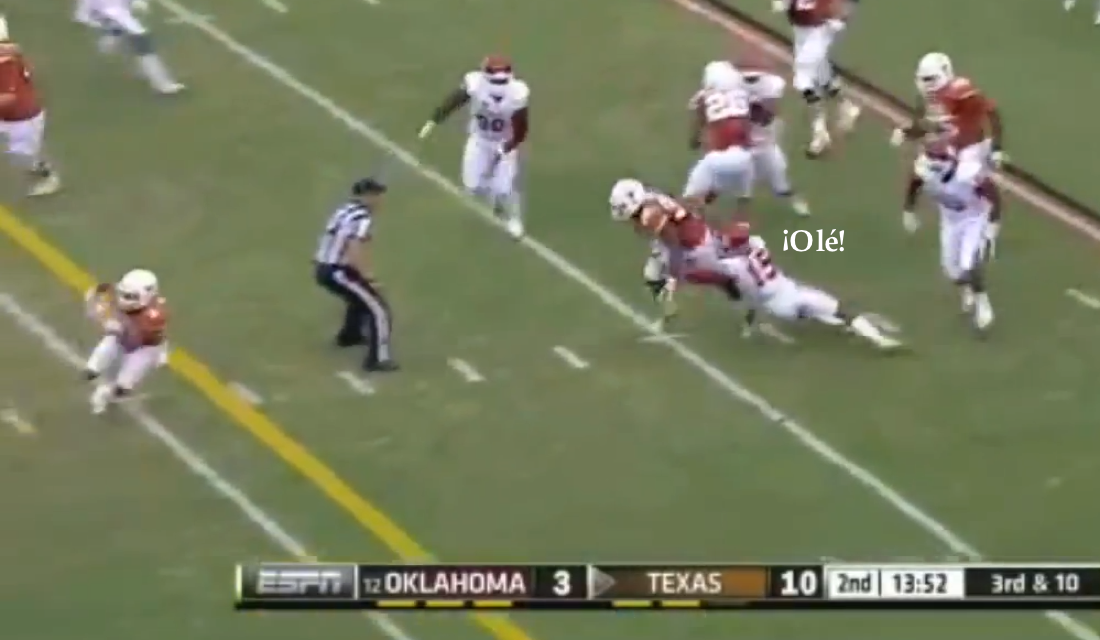 Credit to Gray for breaking the tackle -- something he hadn't been able to do -- and to Mike Davis, who perhaps should have engaged Sanchez but at least he didn't because he was on his way to block Gabe Lynn (#9). Davis's downfield blocking is the difference between the run going for 12 yards and the 38 that it actually does.

The lead draw was a good call against that defensive alignment on 3rd down and 10, but the play isn't successful without the crisp execution seen above.  Walters, Hawkins, and Estelle all do their job sealing their outside rushers from getting to the middle of the field.  Trey Hopkins preserves the hole by executing a textbook block on a difficult assignment turning the tackle. Malcolm Brown gets downfield and provides Gray with the second-level block he needs to get outside.  Gray makes two strong cuts and breaks a tackle. And Mike Davis engages a safety 15 yards downfield.

You could teach a clinic on how to run the lead draw with Texas' 38-yard gain against the Sooners. Just one of many examples of good play calling and terrific execution in the Cotton Bowl.