Why Texas got exposed against Oklahoma State

The margin for error for this Longhorns team was thin coming into the game.

Share All sharing options for: Why Texas got exposed against Oklahoma State

At the beginning of November, Texas Longhorns head coach Mack Brown spoke about his team still scratching the surface of its ability and how much he was looking forward to the team improving.

Brown then went on to mention several areas in which Texas needed to get better to close out the season with a conference championship, mentioning Case McCoy's interceptions, negative runs, the trick play against TCU, kickoff returns, kickoff coverage, and special teams penalties.

On Saturday, several of those issues came back to hurt the Longhorns in the worst home loss of the Mack Brown era.

Take out the trick play and negative runs and substitute the quarterback run game and throw in the bad luck suffered by safety Adrian Phillips when the touchdown pass from Oklahoma State quarterback Clint Chelf to Tracy Moore went through his hands late in the half, and those areas sum up many of the struggles for Texas on a day when the offense had to deal with consistently poor field position and some old issues returned for the defense.

A team content to run for three yards on first and second down on many drives in the hopes of producing several big runs a game is the sign of a team that has little margin for error and even less ability to come back from big deficits, which Texas suddenly faced going into halftime after cutting the deficit to 14-10 following a physical, 10-play, 75-yard drive for a touchdown.

The poor luck on the ball going through the hands of the normally sure-handed Philips was a fluke play, but the subsequent interception thrown by Case McCoy with only a few seconds left on the clock was a terrible decision on an out route that was never open at a time when Texas should have been content to go into halftime and take the ball the start the second half. 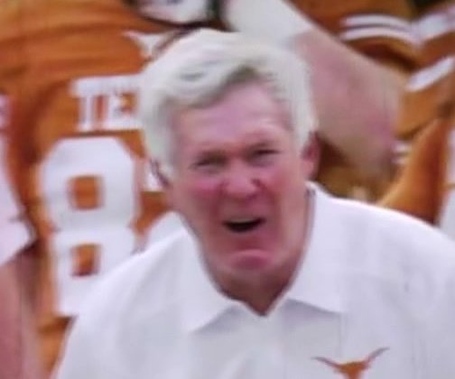 The look on Mack Brown's face as Gilbert raced past him down the sideline summed up the moment and, eventually, the game.

The second interception from McCoy was equally crucial -- the pick by linebacker Caleb Lavey, who now has four on the season, was indicative of just how much attention McCoy needed to pay attention to the Oklahoma State linebackers dropping into coverage. He did not and the Cowboys threw a touchdown pass on the next play.

McCoy took responsibility for the interceptions after the game, admitting that he was forcing passes.

"The quarterback goes out and throws three picks, you're not going to win the ballgame," said McCoy after the game. "It's very rare that happens. So it's on me, my team knows it's on me, and we're going to get it fixed and go win."

Why do the Longhorns have virtually no margin for error on offense? Because facing a big deficit puts McCoy into situations where he starts to force passes and that leads to interceptions. He's now thrown more interceptions than touchdowns on the season, with all nine coming in the last five games, during which he has an interception rate of 5.7%, an unacceptable number.

Even before the early deficit, the problems with negative runs didn't resurface two weeks after Kansas kept Texas from gaining the four yards in normal situations that the coaching staff believes constitutes a successful run, but contentment at this point with the running game is picking up two yards after contact two yards downfield -- the explosive plays just aren't there on a consistent basis and that makes it difficult to flip field position.

In all, Texas had only two plays offensively of more than 20 yards -- a 41-yard pass to Mike Davis down the sideline in virtually the only area that McCoy can hit receivers deep and a 21-yard run by Joe Bergeron that included several broken tackles.

And special teams continue to be an issue, with growing problems on punt returns, as Daje Johnson dropped a punt inside the Texas five yard line that could have been another disastrous play in the game in a situation where he should not have even been attempting to field the ball that close to the goal line.

The bigger problems continue to be on kickoff returns and on kickoff coverage. The first return of the game was kicked to Gilbert when Nick Rose slipped and resulted in a return out to the 40. And the kickoff return situation is getting so desperate that the Longhorns tried a reverse to start the second half that was stopped inside the 10-yard line.

Mack Brown says that he doesn't know what the problem is with the kickoff return unit, but it seems unacceptable for a team with as much supposed talent as Texas to continue to struggle so mightily in that area.

And the issues with allowing teams to either catch punts or punt the ball continued, as tight end Caleb Bluiett was penalized for roughing the kicker. It didn't result in any points for Oklahoma State, as the drive stalled on the next set of downs, but it was another one of those plays that had a large influence on field position.

Aside from Anthony Fera, the special teams haven't provided anything particularly positive all season outside of the punt return touchdown by Daje Johnson.

Defensively, the issues containing the quarterback run game were present once again as Chelf gained a career-high 95 yards, averaged 9.5 yards per run, and scored two touchdowns.

In the first half, the problems came in stopping the quarterback draw, which defensive coordinator Greg Robinson and defensive tackle Malcom Brown attributed to gap control issues on the inside. In the second half, the problems were on quarterback keepers on the zone read, as the linebackers had trouble scraping, defensive backs were blocked on the edge, and the defensive ends weren't forcing give reads to push the ball into the greatest number of defenders.

In the back end, safety Mykkele Thompson continued to take bad angles and the cornerbacks had trouble beating blocks, especially in the screen game. Nickel back Quandre Diggs was notably blocked on the second touchdown run by Chelf as linebacker Steve Edmond didn't properly scrape. The lack of foot speed from Edmond and fellow linebacker Dalton Santos was evident on several occasions. Like the team overall, they have little margin for error when they make poor reads or take a false step.

The bottom line is that Oklahoma State is a better football team, worth of their near top-10 ranking at this point with Chelf playing good football -- that much was clear for virtually the entire game.

And Texas just hasn't improved enough in the last several weeks after benefitting from some opponents with poor game plans (Kansas State, Oklahoma, TCU), but when they faced an opponent capable of exploding the team's significant flaws, the wining streak and good cheer engendered as a result was absolutely and conclusively crushed by Mike Gundy's team.

The needed improvement over the last several weeks hasn't happened and the loss of Johnathan Gray and Chris Whaley further reduced the already slim margin for error, leading to yet another home loss against a ranked opponent.

As a result, the Horns no longer control their destiny in the Big 12 as the coaching staff tries to fix some significant issues before the Red Raiders come to town on Thanksgiving.