DKR: A Hollow Monument To Mediocrity

Let's examine the relationship between the Longhorns and their agitated fanbase at DKR.

Share All sharing options for: DKR: A Hollow Monument To Mediocrity

I think TXSTAMPEDE stated it is best when he described the Saturday afternoon game as a "Bleeding Turnup."

What happened on Saturday isn't new. It isn't something that we haven't seen before. In fact, it's the opposite. Losing at home is becoming the new Texas standard. Don't believe me? Well consider this: Texas has not won a home game against a ranked opponent in their last eight attempts. After crunching the numbers, that's a whopping zero percent "victory per ranked opponent" rate. Here are some more horrifying stats: 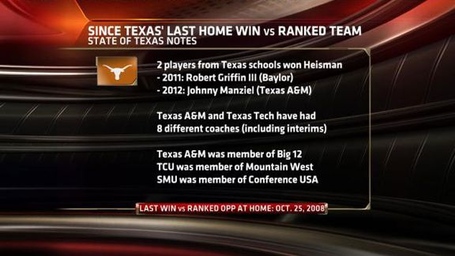 Texas Tech's loss against Baylor on Saturday sealed a trend that will continue into the 2014 season. For seniors like Jackson Jeffcoat, Chris Whaley, Carrington Byndom, and Case McCoy, it'll mean that in their entire careers at Texas, they will have never beaten a ranked opponent at home. But even after all of this, some players are still upset with the atmosphere at DKR. Namely, defensive tackle Malcom Brown:

“The atmosphere was dead. We're used to winning and having this big atmosphere and when we started losing our fans quieted down with it. The team, too. Sideline and everything. Everybody contributed to it.”

So how does a stadium atmosphere change?

“It's more of a momentum thing and big plays," Brown said. "When we were down we were fighting, but we didn't get hyped.”

While the Longhorns can control what they do, they can't control fan reaction. Brown said he noticed early in the second half that fans were leaving the stadium.

“When we came back about mid-third quarter I saw spaces in the stands,” Brown said. “I was like, 'Man, y'all are giving up on us?

“This is my first time noticing it, but you wonder what people are thinking,” he added. “You know who's on the bandwagon and who's not.”

He isn't wrong. The atmosphere was crushed on Saturday and nobody really believed that Texas would come back. After Case McCoy's pick six, the couple in front of us turned to each other, nodded, and headed to the exit. They weren't the only ones, and by the end of the third quarter, DKR was at about half capacity. It's not Malcom Brown's fault. It's not the fans fault. It's just where we are in this sad state of Texas athletics.

Brown's comments don't disturb me as much as they do others, but one thing that did this season was the period of excessive vindication after the Oklahoma game. The mentality became, "If you weren't with us when we were down, don't join with us now." Even in his post game address after the win, Brown told the team to expect a lot of people to jump back on the bandwagon. At what point did this group earn our respect before that? It wasn't the New Mexico State game, where Texas played poorly throughout the entire first half. Surely it wasn't the BYU or Ole Miss games, both of which highlighted everything that is wrong with the new era of Texas football. The Kansas State game put a little bit of confidence back into the team, but it was immediately crushed when it took a last minute drive to beat Iowa State. The entitlement culture at Texas goes both ways. Nothing has really been done to change that.

So who or what is to blame? Obviously coaching. But does it go deeper? As a superstitious fan, I for one would like to highlight something I wrote for the Daily Texan last November about Texas and their relationship with turf. As of now, Texas is only 13-10 on the new playing surface with exactly zero victories against ranked opponents. In fact, in the entire era of the BCS, only two teams that play on artificial turf at home have competed for a national championship. No team that has played on turf has ever won the crystal ball. Winners play on grass.

Blame should also fall on the shoulders of the athletic department, who have now sacrificed one home game every year for the Thanksgiving game. Typically, the Thanksgiving game has a low turnout because so many students are at home with their families and can't make it to DKR. With one home game designated for the Red River Rivalry every other year, that leaves students with four home games. Of those four, one of them is against a nobody and the other is against Kansas or Iowa State. This year the low turnout on Thanksgiving will be no different. If Brown thought last week was bad, he is sure to be disappointed when 60,000 strong show up on turkey day.

I refuse to get into the chicken vs. egg scenario about the Longhorns relationship with their fanbase. What happened first? Were the fans too quiet or was the team too mediocre? It doesn't matter. What I can tell you is this: it's not changing until the team proves that they are worth the money that alumni, fans, and even students are forced to cough up before the first kickoff. It's the nature of the beast. Until that happens, the fans will continue to perform like the players.