It hasn't been an easy journey in Austin for the former five-star prospect.

Don't look now, but Texas Longhorns running back Malcolm Brown has taken over the role of touchdown hawk in the Texas offense with six touchdowns in the last games and is teaming with Johnathan Gray to present a formidable one-two punch for the Horns with two 100-yard efforts in the last three games.

The Kansas game was Malcolm Brown's most explosive of his career...and featured a carer-high four touchdowns.

In a game in which Texas struggled to produce explosive runs, Brown had three runs of more than 20 yards for the first time in his career, as well as his second-longest run, the fourth-down touchdown jaunt in the fourth quarter that put an exclamation point on the victory.

Just a matter of weeks ago, it appeared that Brown was on the verge of falling behind in the Texas running back battle, his lack of carries rather astounding since there were no reports of injuries. Through the first five games, the former five-star prospect had only 23 carries for 63 yards, a number that he matched in the Cotton Bowl against Oklahoma in his break-out performance of the 2013 season.

Since then, head coach Mack Brown revealed that Brown suffered from a nagging ankle injury early in the season that limited both his carries and his effectiveness, all while the running back has gained 390 yards in the last three games.

It's been a tough journey for Brown from highly-touted prospect to occasionally successful Texas running back plagued by injuries.

In 2011, Brown flashed in his third game in burnt orange and white, fighting through contact for 110 yards against UCLA, including an iconic run that he finished without one shoe. A strong game against Oklahoma State followed with 135 yards at 7.1 yards per carry before a career-high 28 carries against Kansas resulted in 119 yards and a foot injury that slowed him for the rest of the season.

Brown never fully recovered that season, even by the Holiday Bowl against Cal, when 13 carries went for only 35 yards despite a 19-yard run.

After an offseason challenge from his head coach to stay healthy, Brown got off to a strong start in 2012, breaking out a 31-yard run in the opener against Wyoming, still the longest of his career, gaining over 100 yards in that game and a superlative performance against Ole Miss. 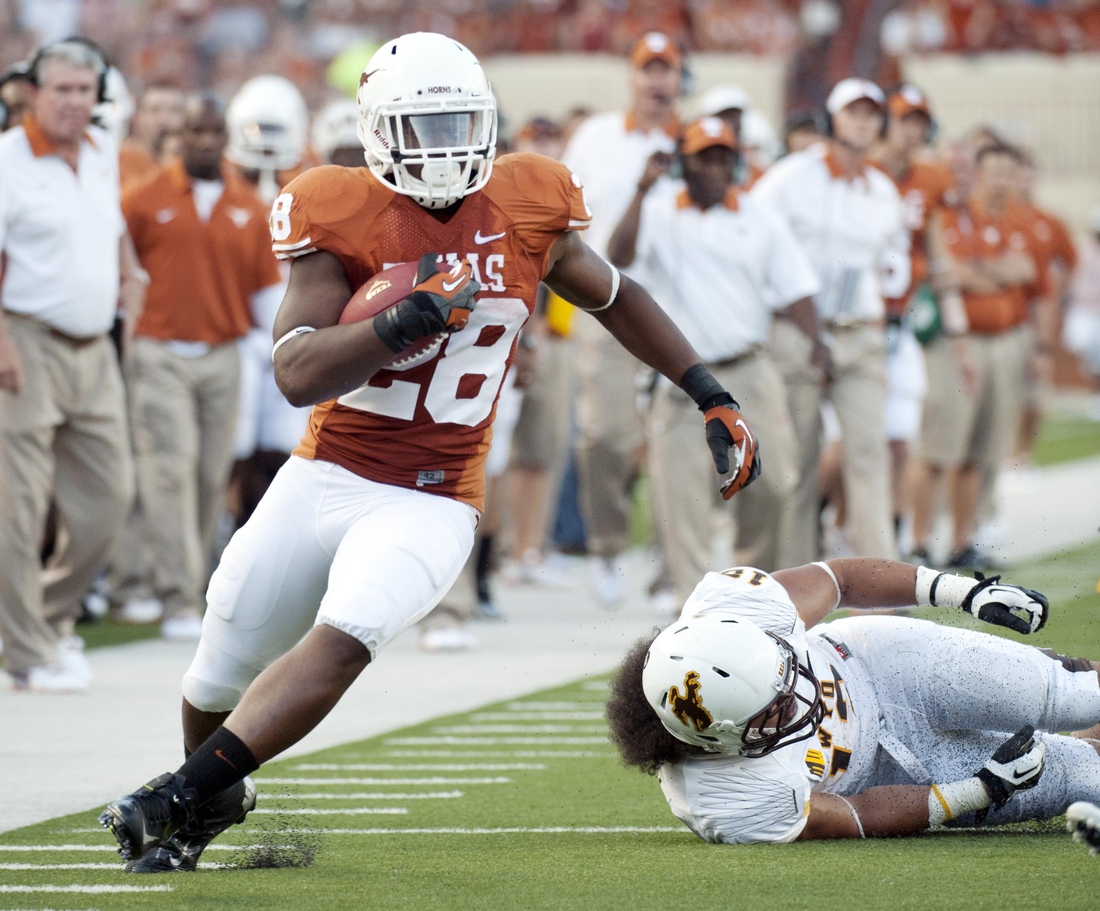 However, an injury once again derailed his season, a high ankle sprain against Oklahoma State. Brown missed six of the next seven games, though his production was a bit better than in 2011 when he returned, as he averaged a modest but not terrible 3.75 yards per carry to end the campaign.

On top the injury, there were also transfer rumors that surrounded Brown in December, to the extent that Brown felt the need to take to Twitter to deny it all.

Through it all, Brown adopted a pragmatic mindset about his injuries and the extent to which they have slowed his opportunities for success.

"I had a couple injuries, had a couple things happen, but that's just the game of football," Brown said this week. "That's what happens to players. I just keep my mind right, stay focused, try to do all the right things, and it's coming together pretty well for me and I'm just hoping to continue that."

From what Mack Brown said this week, he believes that his junior running back deserves the success he has found in recent games and during those other brief stretches of full health.

"Malcolm is a great young man," said the Texas head coach. "He's been raised right. He's from a military family and they're very disciplined and they're great parents. He is a guy who says very little. It's yes sir, or no sir, and that's the way he was raised."

"He's had a very difficult time because when he's been healthy he's played really well and then all of a sudden he's been lost for weeks, too, like a severe ankle injury that cost him about six weeks. He's happy right now. He's excited for the success of the team. He's really a team guy, and he, Johnathan (Gray) and Joe (Bergeron) are really getting along well. It's all working right now and I hope he can stay healthy the rest of the year."

As much success as Brown has experienced in recent games, stealing short-yardage carries from running back Joe Bergeron, whose fumble problems have relegated him to a third-string role, and threatening Johnathan Gray's starting role, don't expect to hear about any strife in the running back room.

"This team has just been blessed so much to have so much talent on this team and so many selfless guys that whoever scores, it doesn't really matter," Brown said. "We're just all out here trying to get wins and just trying to do good for the team and everybody is cheering each other on and that's not just with the running back room. We have so much talent all the rooms, the QBs, the offensive line. Everybody is just working together." 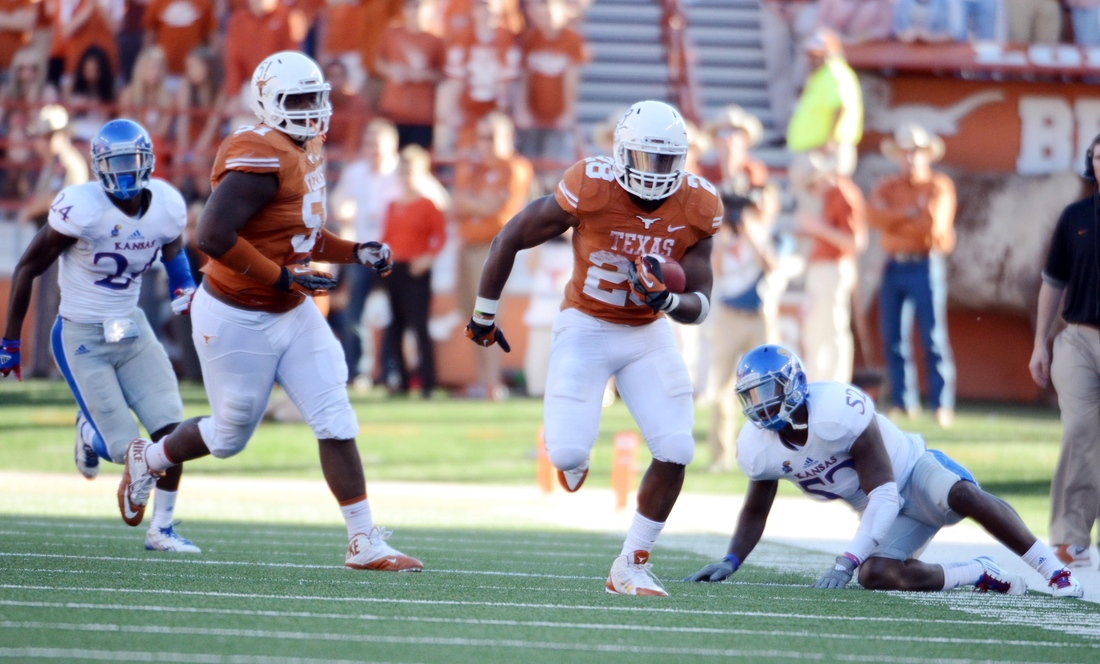 The support structure for Brown extends to former Texas running backs, as well, many of whom have kept in contact with the Cibolo Steele product through his struggles.

"That running back room, it's really turned into a family for me."-- Malcolm Brown

"Even last year Fozzy (Whittaker) was gone and he was still texting me saying to keep my head up, I know you want to get out there, and stuff like that. Jeremy Hills and DJ Monroe, (Ryan) Roberson, those guys, they're always behind you, and that running back room, it's really turned into a family for me."

The result is a running back who is starting to fulfill the promise hinted at during his healthy stretches in the 2011 and 2012 seasons. The long, explosive runs haven't come yet, but Brown is running as hard as he has since the UCLA game in 2011, getting behind his pads more consistently to become a better short-yardage threat than Bergeron with his propensity to bounce everything outside.

Against Kansas, Brown broke off three of the four longest runs for Texas, all of them for more than 20 yards. His 30-yard touchdown on fourth down in the fourth quarter was the second-longest of his career.

On his 21-yard run in the second quarter that set up his second touchdown run, Brown made a superlative subtle cut, dead-legging the Kansas defensive back who was in position to stop the run. His fourth-down run was pretty much a blackboard play that required little from the Texas back, but there's no question that when healthy, the productivity has been there in terms of picking up available yardage with good vision and maximizing it with some yards after contact.

Brown's ability to move to pile, one that Gray hasn't shown in any significant way, means that while Brown may remain the first running back off the sideline, when Texas needs to get physical and grind out tough yards, even on first and second down, Brown should be the guy.

As long as he's healthy, of course.