With a new athletics director set to take over the Forty Acres and change in the air, Texas' basketball coach needs a strong season if he hopes to stick around.

When the Longhorns basketball team tips off the 2013-14 season tonight against Mercer, it will be the 16th under the direction of head coach Rick Barnes. But it could wind up being his last.

Set aside for the moment the question of whether or not Barnes would successfully turn things around if given more than one season to do so, because while that is an interesting, debatable question, it may well be moot: Barnes may only have this season to secure his spot going forward.

Part of the reason he finds himself in this position is his own doing: as Jeff and I detailed in our comprehensive performance review of Barnes, the Texas program has been trending in the wrong direction for several years now, with the team failing to advance to the second weekend of the NCAA Tournament for five consecutive seasons and missing the Big Dance altogether last year for the first time in the Barnes era.

If that were all that Barnes had working against him, there would be greater reason to believe he'd have more time to turn things around. However, there's an additional factor impacting Barnes' timeline for turning things around: Texas has just hired a new athletics director. Perhaps the situation would be different had UT football played to its potential from start to finish this season, but as soon as Texas tanked in losses to BYU and Ole Miss, the overhaul of the athletics department was kickstarted into action, starting with Deloss Dodds' announcement that he would retire within the year and leading to Thursday's hire of Steve Patterson as his successor. By most accounts, Mack Brown is coaching his final season at Texas, and the consensus opinion is that the same is true of Barnes.

Perhaps, and nothing has yet to be decided officially, of course, but Dodds was not pushed to announce his retirement sooner than he wanted to for no reason, and a new athletics director is not being hired in order to preserve the status quo. Moreover, in such a situation it would be an upset if a new AD isn't inclined to make coaching changes, both to inject fresh blood into the programs and to tether his own horse to coaching hires of his own making.

The upshot is that the burden of proof has shifted from the Texas athletics department (to reach the conclusion that replacing Barnes is wiser than retaining him) to Rick Barnes (to prove to a new athletics director that Barnes is the better bet than any coach the AD might hire to replace him).

That isn't an easy hurdle to clear in the best of circumstances, let alone with the challenges Rick Barnes is facing heading into the 2013-14 season. To wit:

That doesn't sound like a situation a coach would be particularly enthusiastic about heading in to any season, let alone one in which his job is on the line, but that's precisely where Rick Barnes finds himself in heading into tonight's season opener.

So... what? Should we just consider this Barnes' farewell tour and hope that the team develops well this year, setting up his successor for success next season? To the extent Steve Patterson has his mind set on making a change after this season, then yeah, that's pretty much what we ought to be hoping to see out of the team this year.

But let's just assume for a moment that Barnes' future is not yet decided -- that Patterson plans to evaluate Barnes based on what he sees over the next six months -- and that there is a performance threshold above which Texas' basketball coach will be asked to return for a 17th season.  What might that performance threshold look like, and how might Barnes meet it?

I'd break it down into three distinct areas:

1.  This year's team overachieves and makes the NCAA Tournament. Heading into the season, the consensus opinion among experts projects Texas as a Top 100 team outside the NCAA Tournament field. With the roster turnover leaving Texas with one of the youngest teams in the country, the glaring lack of any proven scorers, and the program's recent trendline, it's easy to understand a pessimistic projection.

That does not, however, mean this team is doomed to such a fate. Notwithstanding his reputation as an underachiever, Barnes has actually proven to be effective at developing teams that exceed their expectations. In his first year on campus, Barnes led a team with seven scholarship players to a Big 12 championship, and over his 15 seasons at Texas his teams have exceeded expectations 5 times, met them 7 times, and underachieved 3 times: 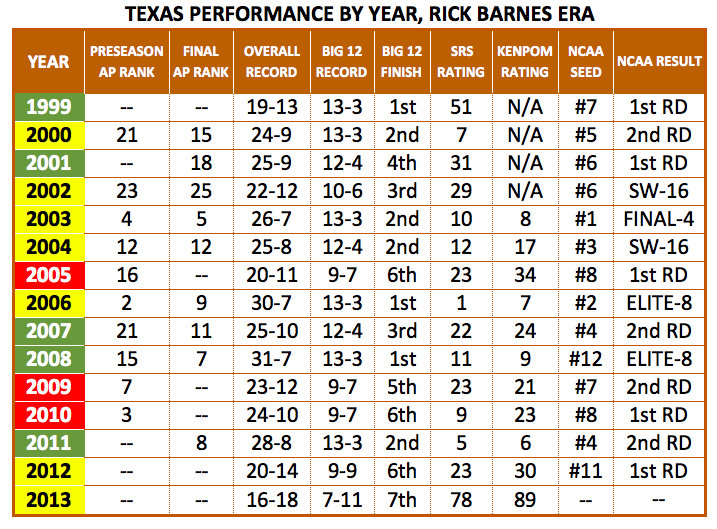 For all the reasons Jeff and I laid out, there are grave concerns about the state of the Texas program under Barnes right now, but there is plenty of precedent in his track record of success where little was expected. And let's be honest: if he can turn this group into an NCAA Tournament team, it'll be a hell of an accomplishment.

2.  Recruiting picks up in a big way. The troubling trend with recruiting the state of Texas has been well-chronicled, and as I said back in June:

Both Jeff and I view the ability to recruit at a high level as a make-or-break quality for Rick Barnes -- with it, Texas basketball is going to be in a position to succeed (although there may be room to debate how high the ceiling is); without it, the case for retaining Rick Barnes dissolves. And with the increased volume in recent years of elite recruits who hail from the state of Texas, the question is more important than ever.

It's the most serious concern with respect to the program's recent trendline, and if it doesn't get fixed -- and quickly -- Barnes isn't going to last here in Austin, even if Texas' new AD were to give him some time to turn things around.

On the bright side for Barnes, after a long period of pretty dismal recruiting news, things have begun to perk up in recent months. I praised him for his shrewd hire of Jai Lucas, which both demonstrated that Barnes understands the problem and reflected excellent judgment in terms of identifying effective remedies.

Texas missed out on Khadeem Lattin, but my sources tell me that Lattin's OU signing was a panic move caused by USC's cooling interest. He may or may not be locked in to OU, but if he re-evaluates his options with a clearer head, Texas will be a very appealing draw. For his part, Barnes didn't waste any time following Lattin's commitment to OU, nabbing JuCo transfer Obinna Oleka out of Florida, a 6-8 athlete with a very similar profile to Lattin, only more developed and ready to play in 2014.

There are positive signs and the tie-in to John Lucas, King of Houston hoops, simply cannot be overstated, but Barnes needs that pipeline to start to produce quickly, if he's looking to give reasons to be retained. And in that regard, it all comes down to Myles Turner, the 5-star stud from Dallas whose final list of 7 schools includes the bluest of the blue bloods: Kentucky, Kansas, and Duke. Also on that list, though, is Texas, and my sources in Houston tell me that Turner worked out with Lucas two weeks ago and had both Jai and John pushing him hard on Texas.  I also hear Turner is a bright kid who wants to work hard and values academics, so I'm going to go out on a limb a bit here and predict that Texas has a much better shot than most realize.  Call it 1-in-3, with Kansas and Kentucky the other two.

Looking down the road, I like where Texas basketball recruiting appears to be headed.  It may take a little time, though, and that Rick Barnes may not have.  I generally resist the general tendency people have to over-simplify things, but in this case, it feels like there's some truth in saying that Rick Barnes' future at Texas could well depend in part on his ability to land Myles Turner. It's not make-or-break on its own, but it sure seems like a necessary ingredient to any recipe for being asked to stick around.

3.  Lighten up and be likable again. It's hard to pinpoint when exactly it happened, but at some point after Kevin Durant left, Barnes morphed from a coach filled with hard love to just being a hardass.  He pushed players extraordinarily hard, and he broke them down. That, actually, isn't necessarily a problem, but there has to be a third and final step: building the player back up.  Breaking players down has to be a part of a process -- one meant to ultimately leave the player stronger than he was before, and otherwise could have been but for what he went through.

Barnes has been missing that last step for a while now, and both the wave of player departures and on-court struggles in recent years are not unrelated. A recent conversation I had with an AAU coach about Turner was telling:

"Barnes has himself a really strong staff of assistants, especially with Jai there now. But he's an asshole, man, and everyone knows it. It used to be that his style wasn't for everybody, and that was alright -- the kids who went to play for Rick wanted to work, but knew they'd get tough love. That's not the perception right now. A lot of people can't stand the guy."

Again, Turner is a kid who's interested in being challenged and pushed hard, so Barnes' style may not work against us in this case, but on the whole, it's clear from people I talk to that Barnes is grating on far too many people, and it's costing us on the recruiting trail.

It also costs us on the court, where in recent seasons players look afraid to make a mistake and do not look like they're having any fun out there. It can be a fine line between drilling young players so they can develop and drilling them so hard that you hold them back, but Barnes has been on the wrong side of that line in recent years, and it's simply got to change -- immediately -- or he's not going to last.  Nor should he.

Texas tips off the 2013-14 season on Friday night at 7:00 p.m. CT at the Erwin Center in Austin, TX.  The game will be televised on the Longhorn Network.