Shane and A.J. teach y'all to properly roast a duck prior the the Texas-Oregon matchup in the Alamo Bowl.

Share All sharing options for: Tastes of Texas: Roast Duck

Considering all the jokes that people have made through the years about turning our beloved mascot into hamburgers and steaks, A.J. Hooper and I thought this year's bowl game was the perfect time to turn the tables. After all, duck is widely known as one of the most delectable meats available if prepared correctly, so Tastes of Texas thought it appropriate to walk you through the process step by step. Without further ado, 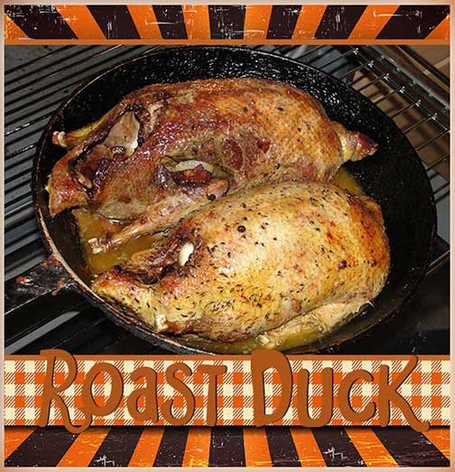 To begin your roasting process you’ll first need to acquire a duck. On its surface this seems like a simple task, but as you’ll see, the duck is one of the most elusive creatures known to mankind, so we’ll spend plenty of time ensuring you get the perfect sample.

Disclaimer: DO NOT start your search at the Rose Bowl or the National Championship. See, ducks have an inherent flaw in their genetic navigation system. Every year toward the end of summer they expect to fly to Pasadena for the winter, but by the time December rolls around they usually find themselves much farther south, often around Arizona, Texas, or Florida. You think you’ll hit your mark when you search in these locations, but here's a little known etymology fact: ducks are named for their ability to avoid thrown objects (like, say, a big bowl) that have been on a collision course with them by moving to a lower position. It's science. This year proves no different.

The first, and most obvious location to find a duck is in its natural habitat of Eugene, Oregon. Your first stake out during the hunt will be at Autzen Stadium. Be wary; while on the surface seems that there are 54,000 ducks to choose from, ducks are fickle creatures, and should the weather turn sour the vast majority of these specimen will show their true colors, and those colors do not beam with green and gold pride.

Start by scanning the student section. Below about the 15th row you can find a handful of ducks that might be solid roasting options. The fact that many of these ducks will be shirtless and painted this time of year in the Pacific Northwest suggests a lack of intelligence, and you should find them easy to apprehend. However, above that level you will find the true ducks. You’ll know your sights are dead on when you hear these creatures badmouthing players they are wholly unfamiliar with. If you’re uncertain just ask them about the fundamentals of a proper run blocking scheme, or really any actual sports knowledge, for that matter. When you’re met with a blood-shot-eyed blank stare you know you’re in the right place. Be alert. These ducks will probably be gone by halftime.

If you fail at finding a duck suitable for roasting at Autzen, you’ll have to seek outside help. Thankfully, there are a multitude of street agents available who can find just the duck for you! (for a nominal extravagant fee). Word is that Chip Kelly has Willie Lyle’s number on speed dial. In fact, he probably should go ahead and call it considering how the Philadelphia Eagles have played this year. I know they made the playoffs, but come one. Someone had to win the NFC East Derp-a-Thon this season.

The third option is to lure the duck to you. It is well established that the duck is the most millennial of creatures, so a heavily bassy dose of Scrillex and Justin Bieber should entice the young duck right into your grasp. If the killer jamz don't do the trick, try waving a participation trophy in the air.

Finally, you can try throwing money at it. Phil Knight has had mediocre success with this approach in recent years, but while cash can buy you an athletic complex with spinning gold rims it won’t buy you a National Championship, at least not against Auburn who totally didn't throw money at that National Championship…moving on.

Regardless of your method of capture, you’ll have to find a way to take down your future meal. As most of the Pac-12 knows, this can prove difficult as the duck is a truly offensively aggressive creature. I suggest you seek the help of another fowl tree like creature, the Stanford Cardinal. The Cardinal has learned through the years that while the duck may seem a truly unbeatable foe, when you greet it with any semblance of a defense or power running game, the duck folds like Oregon t-shirt sales after an 8-4 season.

So, finally, you have your duck. The next step is to strip it of that god-awful plumage, but this is a near impossible task because as you strip off one chrome-diamond plated neon green layer, there is another gold plated, feather encrusted version just below it. We suggest using a true Texas product, and dousing the duck in oil (hell, it’s already feathered) and lighting it ablaze. At least the Oregon students can finally use the term "burn one down" in the context of their athletics for a change.

Well, you finally have your duck, so we need to cook it. Be sure you’re wearing some pre-worn Adidas to accent the occasion. The traditional way…oh, hell, who are we kidding? Ducks don’t have any tradition. Throw the damn thing in the microwave on high and hope for the best. If you’re looking to spice things up, throw on a few seasoning packets from some top ramen and garnish your bird with some Rose Petals.

After all, we Longhorns have won just as many Rose Bowls as the ducks, despite not having a yellow brick road (Dark Side of the Moon overdub not included) to Pasadena every year.

In all seriousness, I hope our friends over at Addicted to Quack don't mind us having a bit of fun prior to what many Longhorn faithful expect to be a merciless beatdown. Special thanks to current Oregon student and SBNation user, abraves257, for being a good sport and helping me compile these stereotypes undeniable truths about the Duck fanbase.

I don't actually know the first thing about cooking duck, so I'll now turn things over to Ms. Hooper who will teach y'all how to put a Tex-Mex spin on this delicious fowl.

2. Rub the spice mixture over the duck thigh and place in a ziplock bag to marinate for up to six hours or overnight.

4. In a small baking dish – you’ll need one that’s just large enough for the duck to fit in, place 3 tablespoons of duck fat on the bottom and place in the oven to render if it is in a solid state for 2-3 minutes.

5. Remove from the oven and place the duck in the baking dish and cover tightly with foil.

6. Bake for an hour and a half to 2 hours or until the skin in crispy and the meat easily pulls away from the bones. Let cool before shredding the meat from the bones. This can be made ahead of time.

In a skillet over medium heat, place a tablespoon of duck fat and the shredded meat and duck skin.

Heat until crispy about 5 minutes.

Serve on top of a corn tortilla with thinly sliced radish, red onions, chopped cilantro and a lime wedge.