Javan Felix demonstrated his ability to play at the collegiate level, but thanks to a baptism by fire also learned a lot about his limitations and how he must improve if he's to be more than a solid reserve.

Unexpectedly thrust into a starting role at point guard thanks to Myck Kabongo's suspension just before the season began, Javan Felix's introduction to college basketball was baptism by fire if ever there was one. Projected to play 12-15 minutes in a supporting role as Kabongo's back up, as late in the season as February 9th Felix not only led the team in minutes, but his 35 minutes per game average led all players in the entire Big 12.

Felix's collegiate career was not supposed to start that way... but without Kabongo, it was the only way.

All things considered, Felix acquitted himself pretty well across the first three months of the season, before seeing a substantial reduction in minutes upon Myck's return, including just 29 total minutes played over the team's final five games.

All told, Felix's freshman season established both his bona fides as a Division 1 player and the limitations he must overcome if he's to be a player with more value than as a solid reserve.

What The Numbers Say

Felix's overall numbers don't quite tell the full story of his freshman campaign, given the extreme differential in his usage between the first two-thirds of the season and the final 11 games with Kabongo back in the lineup. On the one hand, as his minutes declined -- from nearly 35 to just 12 minutes per game -- his counting stats took a hit, as Felix averaged just 3.8 points, 1.2 assists, and 0.9 turnovers per game over the final 11 contests of the season.

On the other hand, upon playing fewer minutes and being tasked with a complementary rather than lead role, Felix was a more efficient player. After shooting 34% from the floor and 17% from beyond the arc over the first 23 games of the season, over the final 11 contests Felix connected on 42% of his shots from the floor and 44% of his three-point attempts, making 7 of his final 16 shots from downtown after making just 5 of his first 29.

There are a few key numbers that help illuminate the nature of the struggles that Felix faced over the course of his freshman season. The first is Felix's relatively modest 23.2 FT Rate, a reflection of how infrequently the height-challenged point guard managed to earn trips to the charity stripe. By way of comparison, Myck Kabongo's FT Rate in 2012 was 73.2, and the year before that Dogus Balbay's was 45.6.

Second, take a look at Felix's shot distribution numbers -- overall, and particularly at the rim: 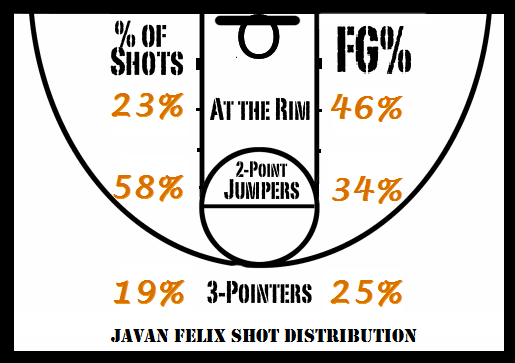 Compare again Felix's shot distribution numbers with those of Kabongo last year and Balbay the year prior:

The third and final set of illuminating numbers are 248, 234, and 96, representing the total field goal attempts on the season for Felix this season, Kabongo in 2012 and Balbay in 2011, respectively. The point guard who was supposed to be a 15 minutes per game reserve wound up taking the most total shots, attempted a lower percentage of those shots at the rim, had the lowest field goal percentage on his shots at the rim, and converted the fewest drives to the rim into trips to the free throw line.

Tying all of that together, Javan Felix was asked on short notice to shoulder a disproportionately large share of the offense on a team that provided little in the way of complementary support, and to do so without possessing the physical skill set to be a primary creator on offense. Felix was in that sense set up to fail -- or at least struggle, which he did. While a more favorable situation in future years should help Felix develop into a more efficient and consistent player, this season also highlighted his key limitations that he'll have to overcome if he wants to be an impact player.

Felix was absolutely brilliant in Texas' Big 12 opener in Waco, where the freshman played 43 minutes and scored 26 points, with 9 assists and just a single turnover, nearly leading Texas to a huge road upset before falling in overtime.

In Texas' final game before Kabongo's return, Felix finally broke down from all the minutes played with a disastrous performance in Austin against Oklahoma State. Marcus Smart and the Cowboys smothered Felix into a forgettable line of 8 points, 1 rebound, and just 1 assist against a season-high 8 turnovers. Ouch.

Absent any context, Felix's numbers deserve a lower grade, but as discussed extensively above, Felix was in many ways thrust into an impossible situation this year and though he wasn't good enough to lead the team past the challenges it faced without Kabongo, neither was he responsible for the team's struggles, the blame for which fell much more heavily on players like Kabongo for his suspension and McClellan for his inability to step up into a leadership role.

With all that said, it's clear that if Felix is to raise his ceiling going forward he needs to develop into a much bigger threat shooting from beyond the arc and learn how to convert drives amidst the trees in the paint into trips to the free throw line. If both of those skills develop to complement the strengths of Felix's game, he'll be a very nice starting point guard for Texas. To the extent that those two skills remain limitations, however, Felix's value will be limited to providing complementary value in more of a reserve role.

Expect the starting point guard job to be Felix's to lose heading into fall practices, but look for incoming freshman Isiah Taylor to provide some of the quality play at point that will protect Felix from being overburdened with a bigger role than he's capable of playing.