The former five-star prospect closed out his career with a bang against Oregon State.

A five-star prospect from just outside of Austin in Pflugerville, Alex Okafor came to the Texas Longhorns as a highly-decorated prep star -- he was ranked by Rivals at the top strongside defensive end in the country, the no. 14 player overall nationally, and second-best player in the state of Texas.

While his developmental trajectory was slowed by a move to defensive tackle for his sophomore season due to need at the position, Okafor's Texas career was an impressive one. At a school that has produced defensive linemen at a rate that almost matches the production of defensive backs, Okafor finished his career at Texas with 12.5 sacks and 18 tackles for loss as a senior, as well as four forced fumbles.

No single game for Okafor stands out as much as his final effort in burnt orange, a dominating effort at the Alamo Bowl that left the opposing Oregon State tackle in tears after the game. With 8 tackles, 6 tackles, 4.5 sacks, and a forced fumble, the Pflugerville product was absolutely phenomenal.

It was one of the best performances by a Texas defensive end in years, as the protections used by the Beavers often failed to include an H-back or running back effectively chipping Okafor, who got one matched up against an H-back who failed to get wide enough in his attempts at protecting his quarterback to keep Okafor from turning the corner.

The adjustment was made in the second half to use multiple offensive players against the Texas defensive end, however.

But by the end of the game Okafor had worn out the opposing right tackle to the extent that when he timed a snap count well late in the game, his jump was good enough that the Beaver player barely had a chance to get his hands on Okafor before the big defensive end slammed the Oregon State quarterback to the ground with authority.

Okafor is at his best as a pass rusher when he can work his speed-to-power moves or simply bullrush opponents. At over 260 pounds, Okafor's a big, strong defensive end who won't win with his first step, but can displace offensive linemen who lack good bases with his pure power -- this is a defensive end who can collapse pockets against right tackles who tend to be stronger than their counterparts on the right side.

The bullrush is the preference, but Okafor can also control opponents if he can get one of his long arms into their chest with his stab move, one of his favorite pass-rushing efforts, as seen below, which allows him to slap away the right hand of the Kansas State tackle in this particular play. 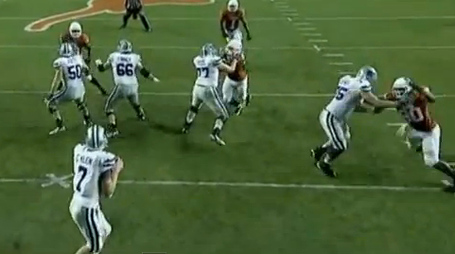 He can also use a pure club move knock away the hands of opposing offensive tackles to help him turn the corner when he's effective using his speed rush.

The forced fumble against Oregon State is illustrative of Okafor's ability to separate quarterback's from the football with his situational awareness and emphasis on going for strips without sacrificing his overall tackling ability. For his career, Okafor caused 7 fumbles and blocked a kick.

The numbers for Okafor took a major jump from his junior to his senior seasons as he got used to being back at the strongside defensive end position he played as a freshman before his detour to defensive tackle. As a junior, he had 6 sacks and 12.5 tackles for loss, pushing those numbers to 12.5 sacks and 18 tackles for loss as a senior, substantial improvement in both areas.

The first step of the former five-star prospect isn't good enough to win a lot of match ups against college right tackles, much less against good left tackles, especially from his two-point stance. At times, he can flash a better first step coming with one or two hands on the ground.

His 40 speed rather backs up that assessment of Okafor's game, as he ran 4.89 and 4.92 at the Texas Pro Day in March, times that did little to improve his stock.

The Longhorns occasionally tried to drop Okafor into coverage in the fire zone schemes, but he was not especially effective in those situations, as he's not the most fluid or natural player in space. Texas defensive coordinator Manny Diaz would have been wise to mostly abandon those looks utilizing Okafor moving away from the line of scrimmage.

This area is certainly related to his struggles in coverage as the likely primary cause, but Okafor has a reputation as a little bit stiff, in part due the lack of coverage ability that he's put on film, but also because he doesn't have loosest hips that would allow him to run the arc a little bit better when he does try to use his speed rush to turn the corner.

When he was unfortunately asked to consistently twist inside on running downs, Okafor had trouble squeezing down into the interior gap and making, often getting there a step slow.

As a strongside defensive end who is hardly undersized for the position at over 265 pounds, Okafor gets washed out of the run game too often for someone his size. Part of the problem may be leverage and pad level, along with lower body strength.

Though Okafor can use his hands well as a pass rusher, his ability to use them to control and then disengage in the run game is not nearly as advanced, though it is also a much more difficult task and Okafor was strong against the run against Kansas State in 2011.

It's not that he's a poor run defender, like some weakside defensive ends, it's just that he's not as dominant as he should be given his tools.

Against Oregon State, Okafor had several opportunities on speed rushers to use a counter or inside move to get to the quarterback, but never showed the ability to do so, though his NFL.com profile indicates that he can at times flash the particular move.

Okafor hasn't been able to do enough to distinguish himself as a possible outside linebacker in a 3-4 scheme and his ability against the run probably isn't good enough to play five-tech defensive end in that scheme either, so he looks locked in to teams that run more traditional 4-3 fronts.

And the depth of the draft at defensive end isn't doing him any favors.

The thing with Okafor is that he got better every year in substantive ways and was willing to do the dirty work inside at defensive tackle even though he only weighed 260 pounds and he played through an ankle injury as a senior.

The problem is that with his skillset he may be more of a weakside defensive end right now than a strongside one, without the elite pass-rushing ability to go against left tackles, but not consistently strong enough against the run to excel on the strongside, either.

What Okafor will bring to the table is a solid motor, some pass-rushing moves and strength as a bullrusher, and the possibility that he can become an average run defender and perhaps even a starter at the NFL level -- there's nothing overly flashy or sexy about him, but he was a productive college player who doesn't have to overcome any size limitations and looks looks like a solid rotation player for a team at the least.