In the constantly changing recruiting landscape, Mack Brown has preempted Nick Saban and offered a football scholarship to the youngest athlete on record, a class of 2031 athlete out of Austin.

Once the standard bearers for early recruiting, Texas has recently fallen behind SEC schools such as Alabama and LSU in actively recruiting and offering scholarships to younger and younger athletes. Mack Brown has taken the next step that is surely not to be outdone: offer a football player not even out of the womb, 2031 Austin athlete Michael Pelech Jr.

"It really came as a shock to his mother and I, especially since neither of us have met Coach Brown," Pelech Jr.'s father, Michael, said. "Both being graduates from Texas, this is really a dream come true."

The offer does come with a few stipulations, stated in the offer, such as Pelech Jr. reaching a weight of 250 lbs. and a height of 6'2", as well as a running 4.4-40 time. "We believe Michael Jr. should reach those measurements. There's some good size in his uncles, and he's got a few large great uncles, so we're confident in his ability to grow."

The obvious question is about what position Pelech Jr. will play. The offer appears to be a broad offer as an athlete, with the next 18 years to decide where his talent lies. "I played a little tight end and safety as a kid, so he may pick those up naturally. I played basketball in high school, so I'd love to see him develop some skill on the hardcourt that he could translate to the field. If we had to pick, I'd like to see him play defense and hit some folks."

Pelech Jr.'s mother Laura offers a scouting report, "Well, he's got a strong punch, evidenced by my sore gut. So if he gets big enough, its a punch he could use to displace some bodies along the interior OL. He's also got a strong kick, which could translate to a good kick-step, so I could see him playing OT. We'll just have to see how he grows and what he picks up."

While a risky strategy, Mack Brown seems to have taken the natural next step in recruiting by offering a player not even born, the earliest possible time to become the child's favorite. With two Texas graduate parents, the Horns look good for a commitment. But Michael Sr. notes another Texas school could be a player. "A lot of our family friends are Aggies, so we'll be doing our best to keep those bad influences from affecting Michael Jr.'s decision. But if he ends up having a mean case of teen rebellion in 15 years, things may change." Hopefully, this latest move by Mack Brown sparks the Texas football program to a resurgence. 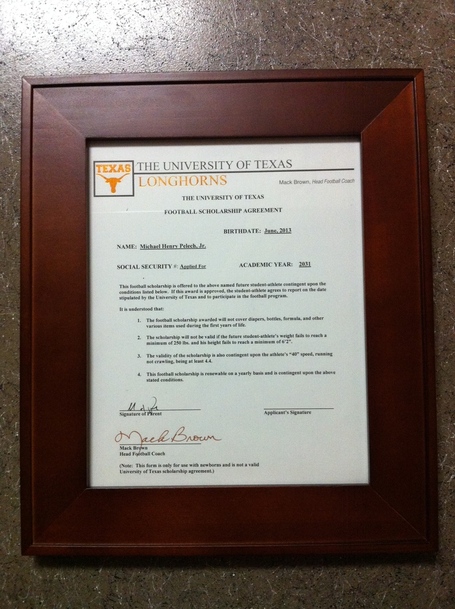 In all seriousness, I wanted to thank Coach Brown for this little gesture he does for fans. The "scholarship offer" is another added joy in a very happy time for my family is one of the things Mack Brown does very well. Thanks, Coach.