Share All sharing options for: Tastes of Texas visits the Buffalo Trace and Four Roses distilleries

It has been, at this point, nearly six years within striking distance of whiskey country. And as of yet, we have hardly seen it. I go to Kentucky daily, every day for the last two years, to earn a living. After this strange passage through life -- this crazy storm of disappointment and new beginnings -- that landed us within a stone's throw of the Ohio river, we are finally setting out to bourbon country.

Not that we don't appreciate it. We do. We enjoy the river; we have come to know it through local interactions. It is just -- we have never reached the source.

It takes approximately 90 minutes to drive from our house in Norwood, Ohio, and aging vestige of a day long past, to the Buffalo Trace distillery, located in Frankfort, Kentucky. The first 45 minutes of this drive are terribly dull. The sites over this time span, listed in order are: downtown Cincinnati, the Ohio river, the Florence, Kentucky mall, best known for its water tower that is inscribed with the phrase, "Florence Y'all," and the point where interstate 71 and 75 split apart.

The dogs take in the scenery from the backseat.

Eventually, we arrive at the point where we will leave the interstate. Exit 62, to get on US-127, headed south. As the car slows, Picasso becomes nervous -- every time the car slows down he worries that we will get out and leave him forever. Kahlo rests quietly; she is not phased. Our dogs are named after 20th century Spanish-speaking artists. 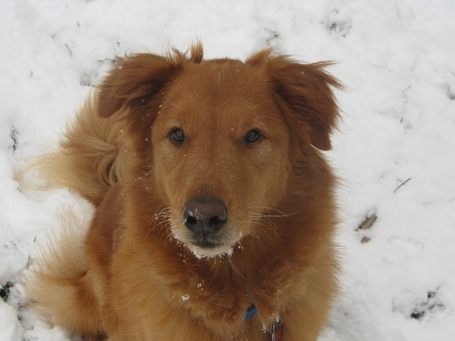 Picasso in the winter.

Once off the interstate, things look as you would expect them to look in Kentucky. It is rolling hills of grass, with white fences. There aren't any horses, but there are some cows. In Owenton, Kentucky, we pass by a huge cemetery full of people and flowers; it is Memorial Day weekend. We haven't time to honor the fallen, as the last distillery tours go out at 3 PM.

The Buffalo Trace distillery awaits, home of many of our favorite whiskeys. And the legendary Van Winkles. After that, it is on to Four Roses. We pick it on a whim, and for geographical convenience. 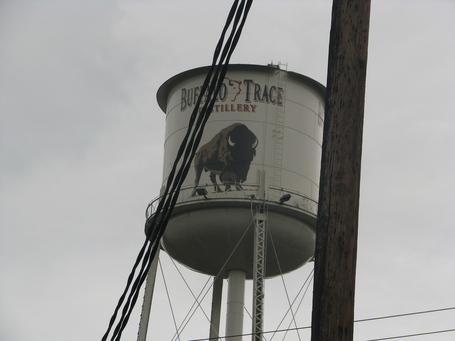 The water in this tower will end up in some of the finest whiskeys on the planet.

At around a quarter to noon, we pull into the Buffalo Trace distillery. It is a large complex near the edge of Frankfurt. The distillery is a National Historic Landmark. It looks like an old factory from the late 19th century, which is essentially what it is. But it is perhaps the most beautiful 19th century factory that you have ever seen. It is landscaped extraordinarily well, and it has this charming old industrial feel, with brown brick and a painted water tower. Living in an old industrial town in Ohio, I have grown accustomed to this particular aesthetic, and I find it comfortable and inviting.

We walk up to a desk, where we are directed inside the visitor center for the noon tour. As we wait the ten minutes until the tour is to start, it quickly becomes apparent that this tour will be very crowded. It is a holiday weekend, and buses are bringing people in to see the distillery.

Our guide takes us outside, and walks us past one of many enormous warehouses filled top to bottom with big barrels of whiskey. He tells us about the age of the warehouses -- they are old -- and a little about the history of the Sazerac company, which now owns what until 1999 was known as the George T. Stagg distillery. 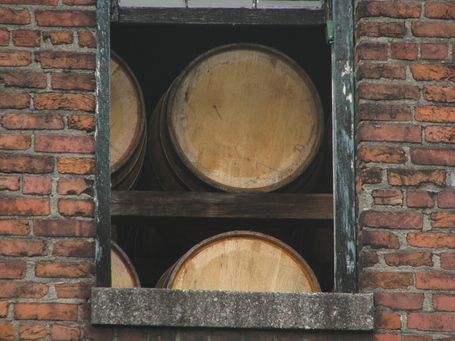 We walk into a room that is a part of one of the warehouses. Our guide explains some of the basics of whiskey, and how different whiskey types are mostly defined by differences in the grain bill. It is the sort of information that a Tastes of Texas reader already knows, but is good information for many in the tour. He hits on many other issues of which the novice drinker is unfamiliar, such as what "straight" whiskey is, why sometimes it is spelled "whiskey" and sometimes "whisky." He explains what a wheated bourbon is, and lists them: the Van Winkles, the Wellers, Old Fitz, Makers Mark. The Van Winkles and Wellers are made at the Buffalo Trace distillery, and no we will not be tasting any of them, although we will see where some of the Weller barrels are bonded on our tour.

After this whiskey 101, we watch a movie that is ostensibly about the history of the distillery, but really is full of branding and gratuitous shots of bourbon pouring into glasses. In it, we learn the story of the early pioneers that came to this part of Kentucky, men who encountered "conditions as rugged as their souls." We snicker. Then the film explains the flavor notes in the Buffalo Trace whiskey. We snicker a second time -- we have been visiting wineries for a long time, and are always struck by this sort of foolishness. The movie is pseudo-sophistication mixed with rugged libertarian values. It is designed to appeal to the Kentucky patriot and the snob; we are neither.

The tour then takes us into an old warehouse, and I am immediately reminded how much shorter people used to be when they were building structures such as these. The warehouse smells exactly like what a four story building full of whiskey barrels should smell like.

Then we see the building where the super premium bourbons and ryes are bottled. They can show us this building, because it is not in operation for all but a short time each year.

The tour ends back where it started, with a tasting. We taste Buffalo Trace (a favorite of mine) and Eagle Rare. A bottle of the Eagle Rare comes back to the car with me.

All in all, the Buffalo Trace tour leaves us a bit disappointed. Of course, our standards are high. When we drink bourbon, we expect this to happen.

It is not entirely fair.

We saw the warehouses, and walked some of the grounds, but we haven't seen much about how whiskey actually gets made. We have seen barrels and a very low throughput bottling operation. We are also surprised how very few brands actually made at this distillery are available for tasting, or are even acknowledged.

But now it is time for lunch. We drive for five minutes, ending up in downtown Frankfort. Frankfort is a pleasant town -- one of the nation's smallest state capitals -- but we have little time to linger. We just want a quick lunch and then we are off to Four Roses.

At the recommendation of people from the distillery, we are seeking out Gibby's, a local deli. We walk in, and it is the sort of place that we like. Old school paneling, fair prices, and a reuben. You never go wrong with the reuben, particularly in this part of the country, and this one satisfies.

We hop back in the car, and make the half-hour drive to Lawrenceburg, the home of Four Roses. 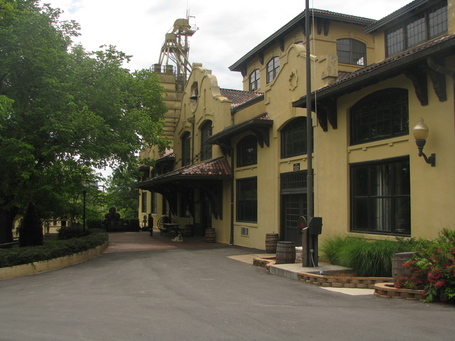 The Four Roses distillery is an architectural marvel.

The Four Roses tour starts off with its own propaganda film, but this one goes into more detail about how the whiskey is actually made. After the short video, our tour guide gives us the basic history of the distillery, and then tackles the elephant in the room right away.

She explains why Four Roses has such a lousy reputation, a reputation that it is working hard to shake.

Canadian distiller Seagram bought Four Roses during World War II. After the war, Seagram made the strategic decision to only produce Four Roses straight bourbon for the export market. All domestic production was to be blended whiskey, bottled with a Four Roses label. This practice continued until 2002, when after a series of historically bad business decisions the family controlling Seagram had to liquidate the company. Four Roses eventually ended up under the control of Kirin, and the new owner discontinued all blended whiskey production and reintroduced Four Roses straight bourbon into the United States. So what had been taken away by the Canadians had been returned by the Japanese.

The Four Roses tour then takes us into the distillery, which is operating today. The guide leads us to the top of the fermenting vats, where we are invited to lean over the bubbling yeast and experience the shocking jolt of getting a face full of carbon dioxide. The acidity of the gas burns in your nostrils; it is like the sensation of drinking a seltzer, magnified by a factor of 10,000. 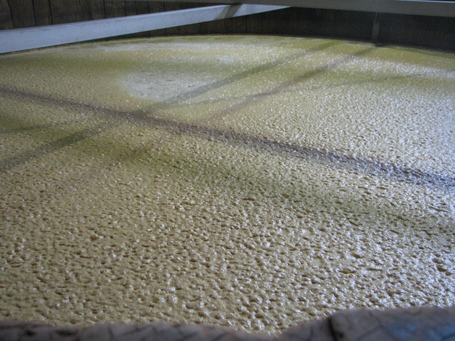 A bubbling vat, with yeast at the top.

We then walk to the continuous distillation column, where the beer goes in near the top and steam enters from the bottom. The beer falls through a series of trays, and contact with the hot steam creates a separation. A clear liquid comes out of the top of the column, and there is a viewing port that helps us to see it. Then it passes into a a pot still, where it is boiled, further concentrating the white whiskey, and directed into a vessel where it is cooled. 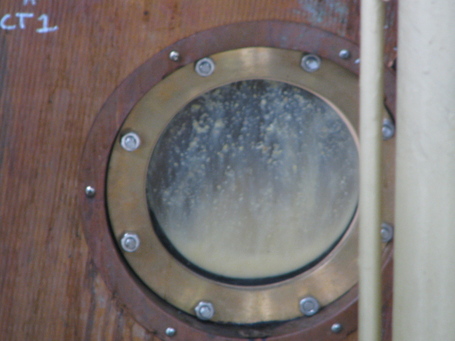 Grain sloshes around at the bottom of the continuous fractional distillation column.

The Four Roses tour is fantastic. At one point a dog wonders into the distillery building. We see everything. The Scandinavian girls on the tour do multiple things that make me, the guy who works in the chemical industry, cringe. By some miracle, they do not die a Charlie and the Chocolate Factory style death.

The tour ends with a tasting of three whiskeys. The standard Four Roses, their more premium "small batch" Four Roses bourbon, and a single barrel version. The tasting is more pleasant than the cattle call at Buffalo Trace. We drink out of proper glasses, and not little plastic containers that are better suited for distributing medicine at a hospital.

I gain more of an appreciation for the Four Roses taste. It is a bit sweeter, likely more heavy in corn, and it is a nice change from my usual preference for more rye heavy flavors.

Whiskey is wonderful, but in some ways, the tours leave us wanting. Four Roses salvages it for a geek like me. And the weather and beautiful Kentucky countryside. But it feels somehow lacking. Still it is good -- not perfect -- but good. And that is good enough.

We buy a bottle of whiskey, let our dogs out of the car for a few minutes, and drive home. It is two hours back to Cincinnati.