More than just the tempo, another element of the Oregon offense will be present in the 2013 Texas attack.

The biggest offseason storyline with the Texas Longhorns is most certainly the adoption of an up-tempo offense designed to run plays every 15 seconds or so, a pace that leaves defenses unable to substitute and should stress the conditioning of opponents.

Other than the trickle-down effects of fewer separate packages featuring different personnel, there are also some substantive changes occurring to the actual offense -- this is no longer the Boise State look that will employ multiple tight ends, H-backs, and fullbacks, instead opting for more spread personnel formations that will often look like those employed by Greg Davis during his time at Texas.

Based on the spring game, it appears that at least one part of the Oregon offense will be incorporated into the Texas attack, though it is hardly an innovation that is only used by the Ducks.

The Pistol offense has reshaped the game of football because it answers a major issue with the shotgun formation. In the shotgun, the placement of the running back almost always determines the direction of the running play, with the exception of counters.

As a result, defenses can place their linebackers to more effectively control the gaps through which runners head on inside zone plays, the running play that is a staple of virtually every offense around football.

Instead of opting for more Pistol looks, Chip Kelly put his running back a step or so behind the quarterback and switched sides just before the snap, which can disrupt the gap integrity of the defense to provide favorable running angles.

The first play of the spring game was illustrative of new approach. Lined up in a set with four wide receivers, Johntahan Gray starts to the right of David Ash, with one linebacker responsible for the strongside gaps and the other lined up near where the middle linebacker would typically align, pretty much over the center. 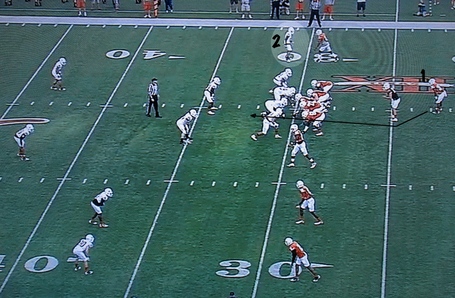 1. Lined up to Ash's right, Gray would be aiming to read the combo block on the left side of the line, heading right into the teeth of the linebacker alignment.

2. To the boundary, where Harsin's offense liked to run last year, the cornerback is in press coverage. 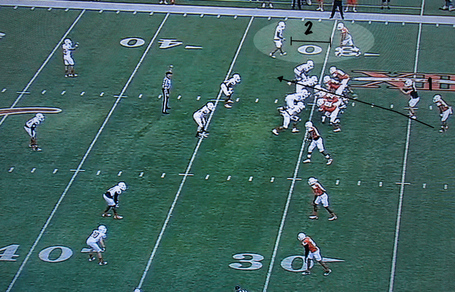 1. On the signal from Ash, Gray switches sides. Now on the left, his aiming point is into the weakside of the formation, where the 'Horns have an advantage because of the linebacker alignment and the two deep safeties.

2. The only response from the defense is the cornerback moving off the line of scrimmage to help handle run responsibilities. 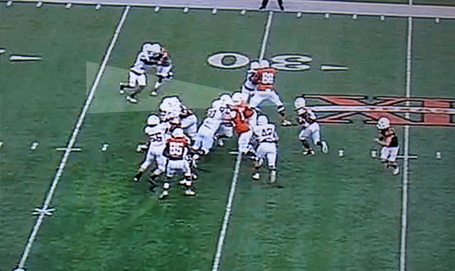 The base block from Kennedy Estelle at right tackle is strong against the defensive end, the interior wins their combo block and the guard seals off the playside linebacker, and despite moving off the line of scrimmage, the boundary corner has a hard time beating the block of the wide receiver.

As a result, Gray has a huge hole through which to run, not encountering resistance until he's picked up a first down and the playside safety makes the play.

The strong blocking was a major reason for the success, but the small wrinkle of switching sides created a favorable running angle for the offense.

Last season, Harsin loved running into the boundary and out of the four-wide sets in 2013 that will feature the strongside linebacker playing almost outside of the box, those running angles will often be to the boundary against this type of defense.

And without watching Oregon opponents in-depth to see how they deal with the switch, it's tough to anticipate how opponents will respond to the look from Texas, but they could wheel the boundary safety down into the box to help out against the run, shade the cornerback even further inside and give up an outside release, or shift the linebackers over a gap.

To all of those responses, the Texas offense should have one of their own, whether it's play-action to the safety coming into the box, attacking the strongside with quick hitting plays like screens, hitches, and dig routes, or perhaps even another quick switch back to the other side to beat the movement of the linebackers.

As it does for many offenses, the play-calling calculus involves counting the numbers in the box. Against teams playing two-deep safeties, expect Texas to run the ball with even numbers in the box -- five box defenders against 10 flex personnel (four wide receivers, including the flex tight end and one running back) against the five offensive linemen.

It may seem like a small adjustment, but it is one that mitigates the weaknesses of the shotgun formation, which were the weaknesses the injured the Texas running game pre-2010 when they ran more spread looks. By shifting the running back before the snap, the 'Horns should be able to force defenses to make difficult choices about their responses, which should in turn open up other aspects of the offense.