How has Rick Barnes fared as a recruiter at Texas, and is there reason to worry about his standing with the top in-state talent? (Part 1 of 2)

This will cover the penultimate topic in the series reviewing the state of the program under Rick Barnes, as we'll wrap things up after this with a post summarizing our conclusions.

Jeff and I have analyzed and presented a lot of data in this series, some of which suggests Texas would be wise to retain its head coach, and some suggesting that it's time to draw Barnes' tenure to a close. Of all the material we've brought to light for this review, perhaps none is as important as the topic of this two-part post: recruiting.

Both Jeff and I view the ability to recruit at a high level as a make-or-break quality for Rick Barnes -- with it, Texas basketball is going to be in a position to succeed (although there may be room to debate how high the ceiling is); without it, the case for retaining Rick Barnes dissolves. And with the increased volume in recent years of elite recruits who hail from the state of Texas, the question is more important than ever. In Part 1 of this post, we'll take a look at Barnes' overall track record as a recruiter in Austin, before turning in Part 2 to a critical evaluation of hoops talent in the Lone Start State and Rick Barnes' ability to bring the state's best to Austin.

Before trying to gauge Barnes' present standing with respect to in-state recruiting, it's helpful to start by taking a holistic, high-level view of his track record in Austin. At least until recently, no one questioned Barnes' ability to fill the tops of his classes with elite talent, and the data bears that out.

The Recruiting Services Consensus Index conveniently includes consensus recruiting rankings for each class back through 1998, Rick Barnes first year in Austin. The chart below lists the number of Top 10, Top 50, and Top 100 recruits that each college has signed since 1998. 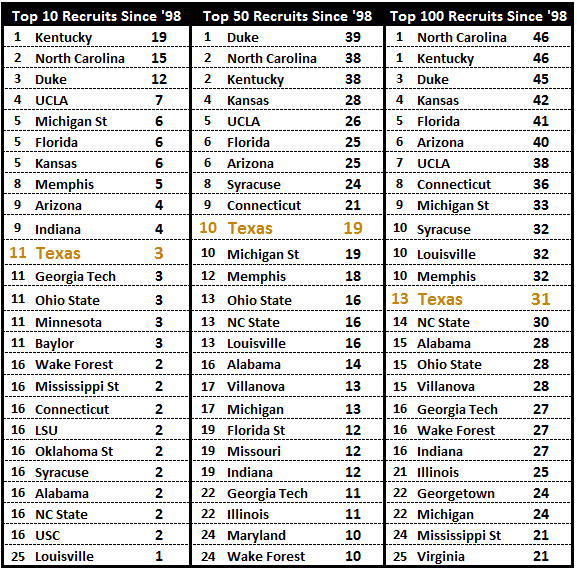 Notwithstanding that success recruiting Top 100 players, critics complained that Barnes was (1) not doing a good job with respect to recruiting complementary, four-year program players, and (2) recruiting the wrong kinds of players to Texas, as evidenced by the paucity of top recruits staying in Austin for four years. 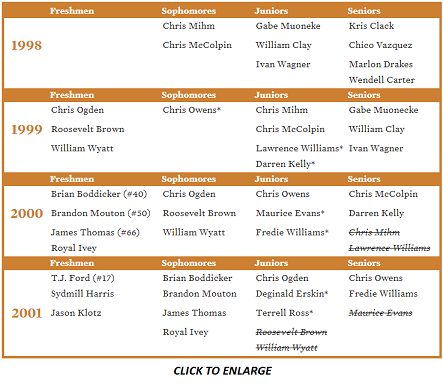 There is some merit in both charges, but perhaps more the first than second. To help illuminate how Barnes has struggled to fill out the remaining roster around the core of Top 100 players, we've compiled a roster grid for the team for every season beginning in 1998 (click this link or the preview image at right for the full roster grid). As you can see from the table, of the 54 freshmen that Barnes has brought to Texas, a full 31 have been RSCI Top 100 recruits, a very healthy percentage. Among the 23 signees outside the Top 100, the results have been mixed, with some weaker talents like Chris Ogden and Matt Hill but more solid multi-year contributors like Royal Ivey, Connor Atchley, and Ioannis Papapetrou. On the whole, that aspect of the critique seems a bit overstated.

But the roster grid also makes clear the ways Barnes' roster management has been subpotimal. Texas has had a season with 9 scholarship players as many times as it's had a roster using the maximum of 13 (three times). After some early success using transfer players like Chris Owens and Maurice Evans to bolster the Longhorns roster, Barnes has retreated from the practice in recent years (when the team has badly needed more players) and the few he has brought in have been low-impact contributors like JD Lewis and Craig Winder.

Although certain aspects of player turnover make roster management an imprecise art, they don't account for many of the shortcomings from which Texas has suffered. There is absolutely no reason, for example, that the 2010 Longhorns-- a damn good team that was almost great -- had to run out of steam down the stretch, in part because Texas had just 9 scholarship players. Barnes knew he was losing four players from the 2009 team to graduation and if there was anything surprising about losing a player early to the NBA, it was that there wasn't more than one. The transfers of Shawn Williams and Varez Ward were potentially unexpected, but even assuming Barnes didn't have a sense that they weren't going to stick around, projecting roster attrition should have accounted for at least one of the two lost spots.

In other words, even a conservative projection should have told Barnes he'd have 3 to 4 open scholarships in 2010, and he knew with absolute certainty that his frontcourt consisting of an incoming freshman (Tristan Thompson) and two redshirt juniors with substantial limitations (Wangmene and Chapman) needed bolstering. Barnes would have done well to try to land either Michael Cobbins or Keith Davis -- two Top 100 frontcourt recruits hailing from Texas -- and it would have been a perfect year to take a transfer or two, such as Kenton Thomas (Creighton) or Emmanuel Negedu (Tennessee), two high impact frontcourt players who transferred for the 2010-11 season. 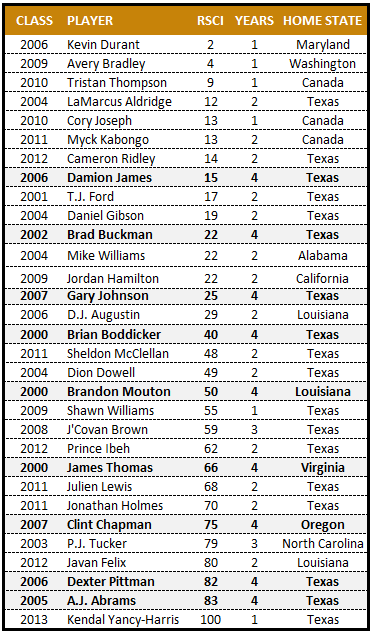 Turning now to the second charge -- that Barnes was shooting himself in the foot bringing in the wrong kinds of elite players to Texas -- the chart on the right shows each of Barnes' 31 Top 100 recruits at Texas, alongside the number of seasons that each played for the Longhorns. Ridley, Ibeh, Holmes, Felix, and Yancy-Harris could all still be four-year players, but outside those five current players, just nine of the remaining 26 have been four-year players for Barnes at Texas, with five leaving early via transfer and 12 departing early to enter the NBA Draft.

In fact, if you add up all the potential years that Texas' 31 Top 100 players could have played in Austin (adjusted for current returning players) and compare that to the number of years that they actually played in Austin, Texas has received just 76 out of the 113 possible seasons (67.3%) that its best recruits could have contributed. Curious how that compared with some other top programs, we compiled the same numbers for Florida, Kentucky, Kansas, and Duke, and UK -- thanks to the recent binge of early entrants who have played for Calipari -- is the only other program to have received a comparably low percentage of potential years from its Top 100 recruits (and across the pre-Calipari years between 1998 and 2009, Kentucky received 82% of the available years from its Top 100 recruits). Part of the reason Mike Krzyzewski (82%) and Bill Self (84%) are two of the game's best coaches is the astounding success they have keeping their Top 100 recruits three or four seasons. For his part, Billy Donovan is north of the 75% mark, as well, and is the owner of two national title rings instead of just one thanks to the stars from his '06 championship team sticking around for a repeat run in '07.

Sometimes he doesn't know the difference between pushing a team or player to be their best and pushing too hard.

So the complaints that Barnes was getting fewer years out of his top players are not without basis. What should we make of that? For starters, it's hard not to ask how much of the blame to attribute to Barnes' coaching style, which can be extremely grating. DJ Augustin was described to me by a source as "miserable" by the end of his sophomore season. And as one former player told me, "I personally like Coach Barnes, but sometimes he doesn't know the difference between pushing a team or player to be their best and pushing too hard."

In fairness to Barnes, though, it's also hard not to ask how someone managed to turn a program that had recruited one McDonald's All-American in its entire history into one that secured commitments from 31 Top 100 recruits, including 13 hamburger all-stars.

Part of the answer is that Barnes quickly began recruiting the state's growing pool of elite talent better than any of his predecessors ever had, but seven of those 13 McDonald's All-Americans came to Austin from outside the Lone Star State. Interestingly, of those seven players, four left after a single season (Durant, Bradley, Thompson, Joseph), another two left after their sophomore seasons (Augustin, Kabongo), and one transferred (Mike Williams). Jordan Hamilton (California) wasn't eligible to be a McDonald's All-American, but he would have been under normal circumstances and fits into this group, as well.

It seems to me that the elite out-of-state recruits who've come to Texas are essentially the result of Barnes' navigation of a trade off. In order to attract nationally elite recruits, Barnes had to sell Texas as an outstanding program to prepare for an NBA career. Why? Why not sell the program's other virtues. Well, because there effectively aren't any -- not compared with the blue blood schools with whom you're competing for the nation's top talent. Schools like Duke and Kansas can sell their programs to recruits as an ideal destination for four years -- the absolute pinnacle of college hoops prestige and experience. Texas has to offer a recruit something, but the experience of playing at the Erwin Center isn't exactly something a player dreams about. Although, it was somewhere Julius Randle could start dreaming.

Whether or not Barnes deserves any blame for his strategy (I personally thought it was perfectly fine, with the need for improvement being Barnes' work completing the rest of the roster), Barnes himself appears to have reached the same conclusion as his critics, pivoting away from recruiting elite out-of-state players whose primary reason for choosing Texas over a real basketball school would be NBA preparation, and focusing attention on a recruiting strategy focused on compiling a roster of players who are likely to stay in Austin for 3-4 years. It's a sound strategy, but in order to be optimized for the highest level of success, it also requires Barnes to take advantage of the growing pool of elite players from the state of Texas -- players who UT, as the flagship university of their home state, actually has something viable to offer.

But recently, Rick Barnes' ability to do that has been a source of growing concern.

Still to come in Part 2: "Recruiting the State of Texas."