With care, the right ingredients, and a little bit of effort, anyone can make a good drink.

Share All sharing options for: The Tastes of Texas: The Cocktail Manifesto -- Part II, Sour Cocktails

It happens somewhat frequently when friends are over, and I find myself making drinks. I ask a guest what he or she wants, and all I get in return is a shrug. Often times people don't know what they want, they just want to be handed a drink that tastes good.

When this happens, I always make a sour cocktail. Famous drinks like the Manhattan, the Old Fashioned, or the Martini are not everyone's cup of tea. But everyone loves a good sour. It is impossible to not like a sour.

This is the second post in our series on making cocktails. The first piece looked at some basic essentials of cocktail making, and described how to make a Manhattan. This post describes a variety of famous (and not so famous) sour cocktails, and shows you how you can take a very simple formula and concoct a variety of enjoyable drinks.

The most basic sours consist of booze, lemon or lime juice, and sugar syrup. There are many cocktails that are derivatives of this basic combination of ingredients, augmented with different juices, or with substitute sugar sources. We will use a series of examples of different sour cocktails to show you how they work.

Let's start things off with a classic.

The Gimlet (or Gin Sour)

Technically, the Gimlet must be made with Rose's sweetened lime juice; this version is a little different (and much better). If you feel very strongly about nomenclature, then you can just call this drink a gin sour. It uses regular lime juice and sugar syrup, and tastes substantially better than any concoction containing Rose's lime juice. A good gin sour, with a decent quality gin, is one of the finest drinks you can have.

The basic recipe is this, with more details below.

1 part simple sugar syrup (made by boiling a two to one ratio of sugar and water, see below.)

4 dashes of orange bitters (you can skip this if you do not have it, but it makes the drink so much better)

In general, my preferred method to make sours is to combine liquor, lemon or lime juice, and sugar syrup in a 4:2:1 ratio. If you look at the recipe above, you see that it contains 4 parts gin, 2 parts lime juice, and 1 part sugar syrup.

I will point out that these ratios are somewhat different from those in David Embury's The Fine Art of Mixing Drinks. Embury prefers his cocktails to be very dry, and his gin sour contains about half as much lime juice and half as much sugar syrup as what is found in my recipe. This is where personal taste comes into play, and where some experimentation is warranted. I find most of my guests prefer their cocktails a little sweeter than Embury's apparently did. This is likely a generational difference, as Embury's guests would have been roughly the same age as my grandparents.

After reading this, I hope that you will never buy sour mix of any sort again. The results you get by making your own mix are so much better, and take very little work. The key is to make sugar syrup. This is easy to do, and it will last a long time in your refrigerator. In a pot on the stove, bring 1 1/2 cups of sugar and ¾ of a cup of water to a boil, stirring occasionally. By the time that the mixture boils, the sugar should be completely dissolved. Allow the liquid to cool, and then pour it into a bottle. I generally use an old (clean) whiskey bottle.

You would probably get better results from freshly squeezed lime juice, but I find that it usually isn't worth the trouble. I buy the nicest bottle of lime juice I can find, and save the time squeezing.

To mix a gin sour, I measure and pour the gin, lime juice, and simple syrup into a shaker. The syrup is fairly viscous, so I generally measure it and the lime juice in one step, as the mixture of these two ingredients pours much more easily out of the shaker cap I use to make measurements. I then add the four dashes of orange bitters to the shaker, add the ice, cap the shaker, and shake the hell out of it. Because this cocktail will not be clear, you can shake it. Shaking it very hard results in a nice frothy liquid. Serve it up in a standard cocktail glass.

Of course, you can make a sour with almost any type of booze. Let's say that you have whiskey, and would like to make a sour. You can make a Whiskey Sour in the same way by mixing:

But why make a whiskey sour? You are, after all, no longer a sorority girl, and the whiskey sour is honestly not that great of a drink; it is merely good. You can do better. There is actually a much better drink you can make that is very similar -- the Ward Eight.

Grenadine is a red syrup that is very inexpensive. The recipe above will produce a fairly dry cocktail. If you want it sweeter, you can either add a bit more grenadine, or a bit of sugar syrup.

You follow the same procdure as with other sour cocktails. Mix it up in your shaker, add the ice, and then shake the daylights out of it. The Ward Eight is often served strained into a lowball, with no ice. I have some nice old ones with little ships etched into the glass. Or you can serve it in a standard cocktail glass.

The Ward Eight is only a simple tweak on the whiskey sour. All you have done is replaced the sugar syrup in the basic sour with a combination of orange juice and grenadine.

Of course, while we are at it, you could also consider trying to mix a Major Applewhite, which replaces the whiskey in the Ward Eight with gin, and tweaks the ratios of ingredients slightly for color purposes. I don't usually measure out ingredients so precisely, but precision is required with this drink to control the color. 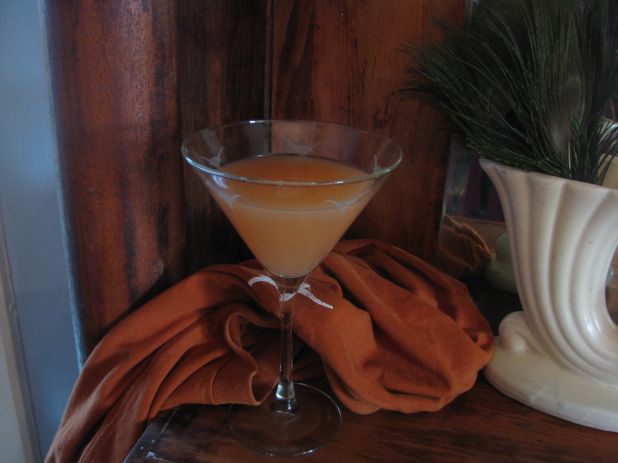 We can continue to use the basic whiskey sour as a jumping off point to improvise. You can take it in different directions by substituting different ingredients, or augmenting in different ways. Here is a drink that I like to call the Blame Canada, but is pretty close to something already named the Maple Leaf:

In this case, the only alteration I have made to the basic whiskey sour is to substitute maple syrup for simple sugar syrup, and add grenadine for color. I already have maple syrup, so I didn't need to buy an additional ingredient.

When improvising sour recipes, it is always important to keep in mind the sugar content. Too much will be bad, but you need to have some. If you start introducing sugar-containing fruit juices to the drink, such as in the Ward Eight, you should cut back or eliminate the sugar syrup entirely, depending on how sweet the added juice is. Some experimentation will be required, but the experimentation should be fun.

The Margarita is also a sour cocktail, with Triple Sec typically substituted for some or all of the sugar syrup. Liqueurs commonly replace sugar syrup in certain sour recipes, with the margarita being a popular example. Even if you don't have Triple Sec, you can make a tasty pseudo-margarita using tequila, lime juice, sugar syrup, and a few dashes of orange bitters. As a simple matter of nomenclature, I just call this particular drink a tequila sour.

Of course, the most well known sour cocktail is probably the Daiquiri. I feel like the Daiquiri is a little misunderstood these days. When you hear the word, your mind immediately jumps to a strangely colored mess of liquor and ice coming out of something that looks like a front loading washing machine, and causes ladies on a bachelorette party to puke in odd colors.

But a real Daiquiri is a very good choice. It is a traditional, and classic, cocktail. It is a sour with rum as the liquor. Making a cocktail using rum, lime juice, and sugar syrup following the standard sour procedure will produce a terrific Daiquiri.

Another easy twist on the daiquiri that I like to do is to add a bit of grenadine. I typically do this when I have a male guest who doesn't know what he wants to drink. Adding a bit of grenadine turns the drink pink, which he potentially finds embarrassing. But the drink tastes so good that the guest will often come back and ask me to, "make another one of those pink ones." I love it; there are few things more fun than emasculating your guests.

There are many other sour cocktails out there, and there is tremondous potential to crank out your own with whatever you have lying around. One oddball that you should order sometime at a bar where they know what they are doing is a Jack Rose. It is quite unusual, using applejack as the liquor, which is mixed with lime juice and grenadine. It is an old drink that has fallen out of favor -- it is very tart, which doesn't match with our sweeter modern tastes. I rather enjoy it, and a local bar makes a very nice one.

Sours are some of the best tasting and easiest cocktails to make. You can start from virtually any liquor. A basic sour combines this liquor with lemon or lime juice that is sweetened with a sugar syrup. To this base, you can add a variety of other fruit juices, liqueurs, and other oddities.

Next time, we tackle the Martini.