How does Rick Barnes compare with his peers? And does fan perception of the Texas head coach match his track record?

Share All sharing options for: Reviewing Rick Barnes: Comparing Barnes With His Peers

Let's stipulate at the outset that Rick Barnes' track record does not by itself provide a definitive answer to the question of whether Texas should retain or replace its long-time head coach. Both context and recent performance are also important considerations, with the latter being the primary reason Barnes currently finds himself on the hot seat.

With that said, if we were to judge Rick Barnes strictly based on what college basketball fans say about him, we would imagine a coach with a dramatically weaker track record than he actually owns. Barnes is routinely characterized as a weak coach and chronic underperformer -- in general and in the NCAA Tournament.

Just how much of Barnes' lousy reputation is deserved? Let's set aside relevant elements of subjective judgment for a moment and look just at Barnes' resume alongside those of some of his peers.

A few notes on methodology are in order. First, regarding average NCAA Tournament seed, for seasons in which a coach's team did not make the NCAA Tournament, I assigned the season a seed of 17. That's arguably a little ungenerous, but I think it appropriately penalizes a coach for missing the Tournament, which in my mind is the Ultimate Sin -- because if you're in it, you can win it... and like the lotto, you can't win if you don't play.

Alright, let's take a look at the 9 resumes side-by-side. Before I give you the names to match with the letters, see if you can (1) pick out Rick Barnes and (2) name any of the other coaches just based on the resumes. 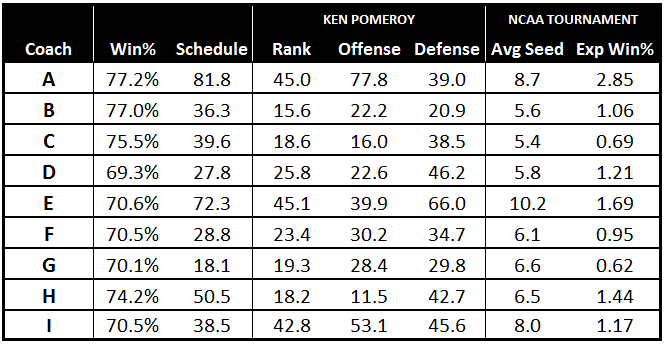 All 9 of these coaches have winning percentages around 70% or above, and by and large we're looking at coaches of perennial Top 25 KenPom teams. The coaches are pretty clustered together in terms of average seed, but there's some real variance in the measurement of performance against seed.

And now I'll give you the names, listed in alphabetical order by first name, along with the seasons included in the data above.

Can you match each coach with his resume?

Note that the data sets are limited to seasons in the Ken Pomeroy database (i.e. nothing before 2003), and I intentionally omitted John Thompson III's two seasons at Princeton and Buzz Williams' single season at New Orleans.

This strikes me as a sensible peer group with which to compare Rick Barnes, providing a nice perspective on the performance records of a useful range of head coaches: How does Barnes compare to the program-defining coach we want him to be (Donovan)? What about the hot young sensation (Stevens)? How does Barnes' resume stack up with some of the names frequently mentioned as desirable replacement candidates (Williams, Dixon, Miller)?

* First of all, while Texas fans may ultimately conclude for other reasons that replacing Barnes is the right decision, we need to be fully aware of and squarely confront the fact that we are replacing a coach with a performance record on par with or exceeding that of most of the likely candidates who would replace him. That's not necessarily a problem, but it's something that needs to be addressed in any argument for replacing him.

* Is there a bigger disconnect between a coach's track record and his reputation than that of Rick Barnes? It's hard to imagine there is, given how widely Barnes is ridiculed and how well his teams have performed.

* Speaking of his lousy reputation, Barnes is routinely cited as one of the most flagrant NCAA Tournament underperformers, but the charge is exaggerated. Barnes has very slightly underperformed relative to his seed, winning 0.95 games for every 1.0 that is expected of teams with Texas' seeds. And if you switch that 2011 Arizona game from a loss to a win, the number rises to 1.02, a tick above expected.

* For criminal Tournament underperformance, see John Thompson III and Jamie Dixon -- the Pitt head coach whose name frequently was offered in discussions among disgruntled Longhorns fans about coaches they wish would replace Barnes.

* It is perfectly fine to drool over Brad Stevens, who is impressive and desirable in a variety of ways. We've said this before, but if you do, you really don't have much room to complain about Barnes as a coach who wins with ugly offense but tough defense. Barnes has nothing on Stevens in that regard.

* Also, too: Rick Barnes' Texas offenses may not have been playing "the beautiful game," but they have actually been slightly more effective than the defenses for which Barnes is known. And this data includes the offensive disaster of the recent 2013 campaign (No. 161 rated offense, versus No. 65 rated defense); take away this past season and the offensive advantage widens considerably, to an average offensive rating of 17.1 versus 31.7 for the defense.

* Interestingly, Barnes is basically Thad Matta, with a little bit less good fortune in the NCAA Tournament; but the two are miles apart in terms of perception right now, with Barnes on the hot seat at the helm of a program trending the wrong way. Interestingly, we also might say that Barnes is basically Ben Howland, on a little bit more of a delayed timeline and with the benefit of a more dispassionate fan base. And that strikes me as a realistic fork in the road in terms of defining Barnes' future at Texas: either he'll get things back on track and Texas has a Thad Matta type of head coach directing the program, or this troubling trendline continues and Barnes will meet the same fate as the man who took UCLA to three straight Final Fours.

Finally, let's expand this analysis to examine the 2003-13 resumes of two additional coaches that are not included in the first chart above but are worth thinking a bit about in the context of this discussion: those of Syracuse's Jim Boeheim and Wisconsin's Bo Ryan.

Both coaches offer something for Texas fans to think about when evaluating Rick Barnes' tenure at Texas, and whether the university should stick with him if he reverses the current trendline and returns to form.

Jim Boeheim won a national championship at Syracuse in 2003, the first year included in this data set but Boeheim's 24th season at Syracuse. Before he broke through for his first and only national title, Boehiem took Syracuse to the NCAA Tournament in 18 of his 23 seasons as head coach, with two Final Four appearances, and one (so far) post-season ban for rules violations.

By comparison, Barnes has taken Texas to the NCAA Tournament in 14 of his 15 seasons, with one Final Four appearance and zero NCAA sanctions. If Barnes were to win a national title in his 24th season at Texas, it would be in the year 2022.

Turning now to Bo Ryan, do you ever hear anyone talk particularly critically about Bo Ryan? Commentary about Ryan seems to be overwhelmingly positive, and for good reason: in the 11 seasons covered by this data set, he's won 73% of his games and taken the Badgers to the NCAA Tournament every single year, with 5 of those Tournament bids resulting in an appearance in the Sweet 16.

By comparison, Barnes won 71% of his games and earned a Tourney berth in 10 of those 11 seasons, with 4 trips to the Sweet 16. The much-maligned Texas head coach, however, has won 3 of Texas' 4 Sweet 16 match ups, resulting in two Elite Eight seasons ('06 and '08) and one run to the Final Four ('03). By contrast, although Bo Ryan's overall performance relative to seed has been right on average, the well-regarded Wisconsin coach has won just 1 of his 5 Sweet 16 contests, way back in 2005; the Badgers haven't been to a Regional Final since and Bo Ryan has never been to the Final Four.

Does any of this mean that there can't be other reasons that ultimately justify Texas cutting ties with Rick Barnes? Not at all.

But we should all be clear about this much: Rick Barnes is not the caricature he's widely portrayed as being. And his overall performance record raises the burden of proof required to justify terminating him.

Up next in the series: a look at the field of coaching candidates who might replace Rick Barnes if he were to be let go.