There's just something strange about a record-setting offensive performance getting an online reaction that leads one to search Wikipedia for metaphors associated with mass suicide.

And so the Texas football season begins. All across the state of Texas, Time Warner subscribers tuned into the Longhorn Network for the first time.

The Longhorn Network pregame show is astounding in both its length and enthusiasm. It is relentlessly cheerful about the Texas Longhorns. Things just keep getting better and better for Mack Brown and company.

Did The Longhorn Network guy just say David Ash was a top 5 QB in the country?? What's he smoking? #Longhorns

That was one-time Buffalo Bill Ray Bentley, who by my count made this statement twice during the broadcast. He first said it prior to kickoff, and then repeated it midway through the second half. This particular declaration is probably a bit premature, but it is par for the course when team news is filtered through the party organ.

Of course with any game broadcast on the LHN, there are the usual complaints about not being able to see it.

I hate how the horns have their dumb network so I can't watch! #hookem

Dear @DIRECTV please get @LonghornNetwork soon or ill have to change servers. #hookem

And then there was Marquise Goodwin, who received a helpful suggestion on Twitter when he was unable to find the game on TV in Buffalo.

Firstrowsports.eu, homie! #HookEm @FlashGoodwin: That moment you realize an hr before kickoff that you don’t have @LonghornNetwork 😡

Who can blame anyone for wanting to do whatever is needed to watch the game. It has been a long summer without football. The fall is here. Or almost here; it was still pretty damn hot prior to game time, as Kaylee Hartung showed us while reporting with an official Longhorn Network back yard thermometer. I am sure they have sold five or ten of these at the Co-op.

Twitter traffic was rather high this week for a game broadcast on the LHN. I suspect this reflects two things: (a) more people than ever can now watch the LHN and (b) interest is always high for the first game of the season. My search captured just under 15,000 tweets during the game. This is a fairly robust total for an LHN game; recall that with the same search string I collected only 6,100 tweets in the last LHN game against Iowa State.

The plot below summarizes some of the Twitter traffic as a function of time during the Texas -- New Mexico State game. The red line plots the tweets in my database that mentioned David Ash. The green line plots the tweets related to Daje Johnson. And the blue line is the negativity index, a composite of different terms that track changes in fan sentiment during the game. 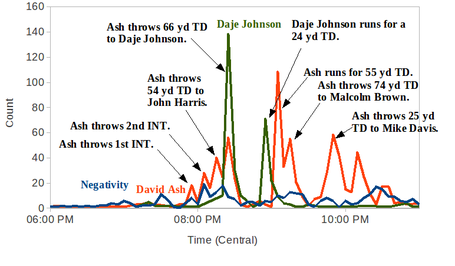 The negativity index didn't do anything dramatic, as Texas fans weren't particularly worried about the outcome of the game, even during the difficult first half. Now, there were still plenty of negative tweets that weren't effectively captured in the negativity index, particularly related to the play of David Ash. More on this below.

The frame of mind of the Texas fan

I don't think that we learn much about the Texas football team after a game like this. Texas' early struggles were in large part due to some sloppiness of the sort that is going to pop up now and then, along with a few bad breaks and one bad decision by David Ash.

And I don't think we get much information from the offensive explosion that started at the end of the first half, and continued for the rest of the game. Not very often will David Ash be able to run 50 yards down the sideline with no defenders remotely close. And we cannot expect that Malcolm Brown will again be left completely undefended coming out of the backfield and allowed to run alone for 74 yards on what surely was a busted coverage.

However, reasonable (and unreasonable) people will probably disagree with my view. Many people are ready to take what we have and extrapolate. This leads us to this weekend's "Kool-Aid" debate. This debate features one side of the fanbase as the "realists," who paint their opponents as shiny and optimistic cultists choking down South American cyanide while firing shots at congressmen. They see the truth as what happened during the first two quarters against New Mexico State. To them, this is predictive.

Meanwhile, the other side -- the "optimists" -- take offense to those that want to rain on their parade. They look at a record setting offensive performance and chant "scoreboard," largely dismissing other concerns.

I don't really care about this debate. It is not particularly useful, satisfying, or productive. But have at it if you like. Who am I to judge?

If you do engage, I would like to make a simple request. Let's put the whole "Kool-Aid" bit to bed. It has become a tired cliché. Plus, it is a little dated; the Jonestown mass suicide took place in 1978. I was two years old at the time, so it doesn't exactly resonate with me.

We need a new way to describe the sort of blind allegiance that "drinking Kool-Aid" has come to mean. I am here to help, and want to suggest a simple alternative. Every time you want to use the term "drinking the Kool-Aid," let's substitute something new. My proposal is "following the Hale-Bopp comet," but you may have better ideas.

While I am sure other more serious football analysts will have more insight, for a casual viewer like myself the only takeaways from this game that I have are: (a) Daje Johnson is going to be a big part of the offense and (b) Joe Bergeron is not (at least until someone gets hurt). I am not ready to pick a side in the optimists vs. the realists; I just don't have enough information.

But while we cannot learn a lot about the team from a casual watching of this game, we can learn a bit about the feelings of the fan base. Nowhere else does that show up more clearly than in comments made about David Ash.

The highs and lows of David Ash

When David Ash and the Texas offense struggled at the start of the game, Texas fans reflexively lashed out at the quarterback. Below is just a selection.

David Ash is going to be the death of the Longhorns!

David Ash, he is not very good at throwing the football is he? #hookem

Please bench Ash he is awful. Mack it is time to use your football brain. Ash is terrible sit him now #longhorns

It is curious to me, getting in this frame of mind so quickly. But perhaps we should just view this as a tune-up game for the fans, in the same way that we view it for the team. This could simply be anger practice, as Texas fans prepare themselves to respond to the range of possible emotions in the season ahead.

Of course, some fans got in on the action just a few minutes late. Shortly after Ash's 54 yard touchdown pass to John Harris, this tweet floated through:

Can we please put case McCoy in please... Ash man clearly this is to big for you ... @LonghornFanShop @utexaslonghorns @HookEm

I am going to be charitable and give this fan the benefit of the doubt. Given the fact that the game was on the LHN, perhaps this was just someone responding to what they were able to follow over the Internet, where information often lags behind real time. Although the appeal to the Longhorn Fan Shop is a bit odd; you would be far better off sending your requests to @redmactoyota, as I understand they have more pull with the team.

That said, most fans were more than ready to hop back up on the Ash bandwagon. They might as well at this point, as there isn't a reasonable alternative.

Ash is back! #Hookem