The Aggies used peel motion from their tight end to pick up consistent yardage against the Horns last week.

In the opener against the New Mexico State Aggies, the Texas Longhorns defense allowed the Aggies to stay on the field for over 20 minutes in the first half, in part because of a stretch of play where quarterback Andrew McDonald was able to pick up quality yards on zone read keepers and found his tight end Andrew Dean four times, including three times on a five-minute long drive that spanned the end of the first quarter and the start of the second.

Early in the game, Texas defense end Cedric Reed was playing inside the tackle and crashing down hard on the zone read game, showing essentially no regard for the quarterback run threat. The benefit was that the defensive line was able to stop the Aggie running back on a number of plays, keeping the linebackers from having to make plays themselves, but it also exposed Texas to keepers from McDonald.

New Mexico State started using peel motion on their zone read look, bringing their H-back across the formation to block the edge defender. In the Texas nickel set, for a while that was junior cornerback Quandre Diggs, not a match up that favored the Horns at all. 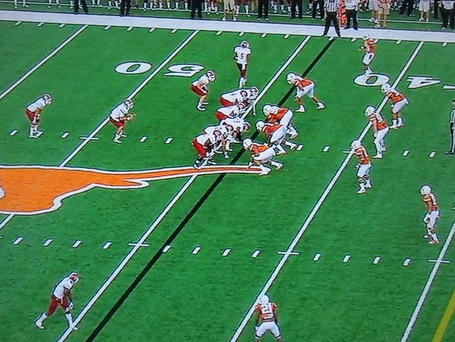 This is a heavy look from New Mexico State with a tight end and H-back to the short side of the field and Quandre Diggs still in the game for Texas. With Reed playing inside the tackle, that's where Dean, playing H-back, is aiming. 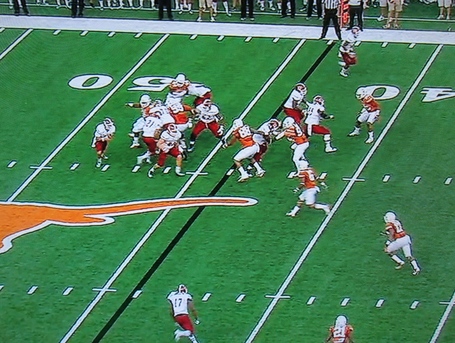 Reed gets caught crashing as he has been all game and the quarterback keeps, getting behind the lead block of his H-back. The playside linebacker is dealing with an offensive lineman, leaving safety Adrian Phillips as the best bet to tackle the quarterback. 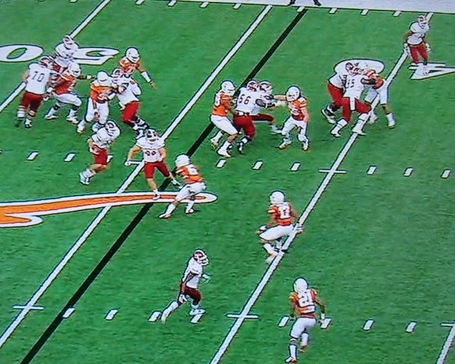 Diggs can't beat the bigger player and Phillps has to make sure he leverages the quarterback properly, which slows his close. McDonald picks up seven yards on the play.

At times, the Aggies also ran their zone read using the H-back as a lead blocker to the strong side of the formation instead of bringing him across it. It's a look that presents some problems for defenses, especially those playing nickel. With the defensive end Reed playing head up on the tackle with a tight end to his outside, the offense can combo block the player they are supposedly reading, once again allowing the H-back to block the nickel back Diggs. 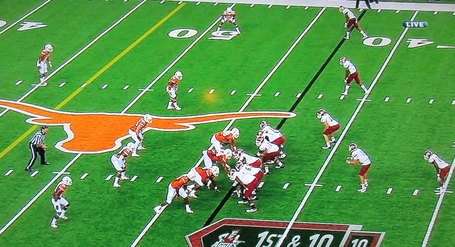 Texas is still in the nickel against the same personnel grouping for New Mexico State, which is now aligned with the strong side to the wide side of the field. 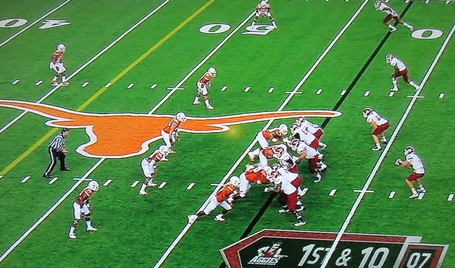 Because of the extra tight end in the game, New Mexico State can double-team Reed to the second level, effectively taking him out of the play. In other words, there's no even really much of a read for the quarterback, as he can see pre-snap that Texas will be out-flanked on this play with his H-back on Diggs once again. 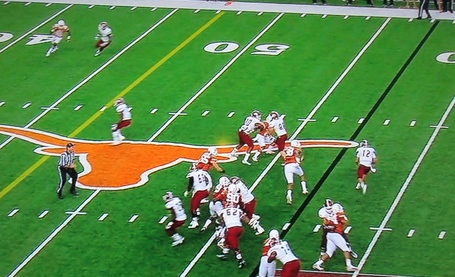 The tight end ends up helping out the H-back on the block on Diggs, while Reed can't get outside fast enough to stop the quarterback, who is once again up to the safety level.

In other parts of the first half, the Horns still played in a nickel alignments even when the Aggies had heavy looks with a tight end and H-back on the field, an offense personnel grouping that would seem to call for a base 4-3 defensive look. Diaz may have been seeing if Texas could handle a heavier offense out of the nickel, but it's odd to see a defense stay in the nickel against offensive looks like that.

The complementary play that New Mexico State was running was a play-action bootleg pass that got the quarterback out of the pocket and able to hit Dean in the flat -- same deal as the zone read, except with the peel motion coming out of the backfield. Texas was bringing Diggs on the blitz in those situations and it left a safety on the tight end. In one case, senior cornerback Carrington Byndom wasn't able to come up and make the play on Dean, one of several plays on the day in which Byndom didn't look particularly physical.

Without knowing the defensive calls, it's hard to say how many of those breakdowns were on the linebackers, who may have been removed from pass responsibilities for the tight end or Diggs not reading the peel motion on the snap to stop his blitz. Either way, Texas had some issues with how they were playing those looks in the first half.

In the second half, New Mexico State came out throwing the football and never really got back to the plays that were working for them in the opening frame, perhaps in part because the deficit increased quickly.

On the one occasion that they did run the zone read peel action, the Texas defensive end got wide enough to force the give read and the rest of the defense was able to clean up rather quickly, a simple adjustment, but one that isn't always enough because the peel blocker on the play essentially means the offense gets to choose where they want the ball to go instead of the defense actually providing the read.

Getting vertical in the passing game consistently seems unlikely for BYU since they've had so many issues in pass protection and star wide receiver Cody Hoffman probably won't be at full strength, but after starting the game with two running backs on the field, the Cougars switched it up on the second possession against Virginia to feature a tight end and an H-back

What was the first play? A peel zone read, of course, so the Cougars definitely have that look in their playbook. Look for it again on Saturday, even though BYU didn't run the play at all for the rest of the first half and only used that personnel grouping on the one drive. Hopefully Texas is more prepared to deal with it in the second game of the season than they were in the first.