Getting ready for Texas' first trip to Provo since 1988... and hoping this visit goes better than the last one.

Share All sharing options for: Texas at BYU Game Notes

Horns hoping for better visit to Provo. The last meeting between Texas and BYU came in 2011, when the Longhorns rallied from a 10-point halftime deficit for a 17-16 victory at DKR-Memorial Stadium in Austin.  As Texas travels to Provo to complete the home-and-home series, the Longhorns are hoping that they fare better than the team did the first time around.

Back in September of 1988, David McWilliams took unranked Texas on its first-ever trip to Provo to face the No. 19 Cougars, and were met with compete and utter disaster.  UT quarterbacks Shannon Kelley and Mark Murdock combined for one of the worst performances in program history, completing just 13 of 42 passes for 167 yards, with no touchdowns and 4 interceptions, one of which was a pick-six. In a bit of a statistical oddity, the Cougars didn't fare all that much better in terms of completing their passes, connecting on just 17 of their 42 pass attempts. The difference?  Their 17 completions went for a whopping 402 yards and 3 touchdowns, coupled with just 1 interception.

How to lose a game you won. Speaking of statistical oddities, the final score of BYU's 19-16 loss to Virginia in the season opener last week is deceptive, considering the Cougars' advantage in the box score. BYU amassed 362 yards of total offense while limiting UVA to just 223, and outpaced the Cavs in first downs 21-14.

So what went wrong? BYU struggled when it mattered most, averaging just 3.2 points across five trips inside the Virginia 40 yard-line (2 touchdowns, 1 field goal, a punt, and expiration of time).  To put that in context, 3.2 points per trip inside the 40 would have ranked 115th in college football last year. (The 2012 Horns averaged 4.72 points per scoring opportunity, which ranked 30th nationally.)

Healthy 'Horns. At the risk of jinxing us, the Longhorns head into Provo as healthy as the team as a whole has been in at least three years.  The Longhorns will be more or less at full strength on Saturday, having suffered no significant injuries in the opener and getting Josh Turner back in the secondary, as well as both Kendall Sanders and Marcus Johnson back at the wideout position this week. Left tackle Desmond Harrison will also be a week further along after being forced to sit out much of fall practice, but more on him in a second.

All of that can change in a hurry, so fingers remain crossed as always, but at least heading into this match up, Texas will be fielding as deep and healthy a roster as it has in some time.

Defensive Discipline. Looking for a key to Saturday's match up?  Look no further than Texas' front seven versus the BYU running game. As a passing quarterback, BYU signal caller Taysom Hill is, um... raw, shall we say. He's got some terrific targets in Ross Apo and Cody Hoffman, but even in suboptimal conditions, Hill's final line of 13-40 for 175 yards (4.4 yards per attempt) was as much a reflection of where the young QB is as a passer as it was inclement weather.

But that isn't to say Hill is not without his virtues, and I wouldn't be too surprised if BYU head coach Bronco Mendenhall decides to slow this game down a bit from their normal tempo, looking to limit the number of possessions and methodically move the chains on the ground. Sophomore tailback Jamaal Williams is a gamer, and Hill can be a deceptively dangerous rushing quarterback and a capable administrator of the zone-read option.  Texas will need to play disciplined assignment, gap-control defense on Saturday.

For last year's Texas defense, this was an area of, um... struggle, shall we say. (In the time it took me to type this, Andrew Buie just scored again.) This is our first real test to see how much this group has improved from a year ago.  The Cougars don't present a dynamic offensive attack, and Texas will have to prove itself against a whole lot better come conference play, but considering the ease with which teams gashed UT on the ground last year, this defense will get its chance on Saturday to show it'll take more than that to beat them this year.

PREDICTATRON: BYU. In case you missed it, this week's PREDICTATRON questions are up.  Don't worry if you missed last week or had a rough go of things in your week one picks: remember, only your 10 highest scores count, so you're throwing out your 2 worst scoring weeks.

Game Vitals. Saturday's game will kick off at 6:00 pm CT, and will be televised on ESPN2. Forecasts call for about a 30% chance of rain. 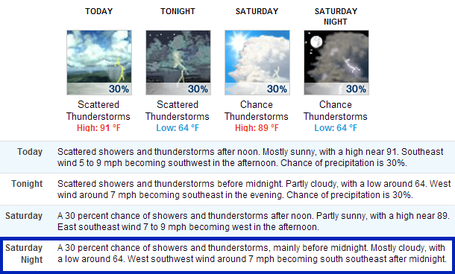 Big Nasty. And last but not least, I promised I'd come back to Desmond Harrison.  Or as I now fondly call him, "Big Nasty."  Watch for yourself. (H/T Scipio)