Keeping the opposing quarterback in the pocket this year could help the Horns create separation.

In the second game of the season against the BYU Cougars, the Texas Longhorns defense had an opportunity to exact revenge after allowing quarterback Taysom Hill to run wild on them in 2013. It didn't go so well.

On Saturday, the group will have another chance at redemption after allowing Iowa State Cyclones quarterback Sam Richardson to consistently escape from the pocket with big running lanes. Now a junior, Richardson's 12 carries for 104 yards (removing sack yardage) was almost enough to sink the Horns in Ames and in the first half he converted 7-of-11 third downs, in large part because of that scrambling ability.

Here's a look at what happened last season.

The first successful scramble from Richardson came in the first quarter.

Defensive end Jackson Jeffcoat tries a stab move, but doesn't have arm length or strength to execute it as Alex Okafor was able to do so successfully last season, defensive tackle Malcom Brown makes an inside move and can't quite keep the guard's hands off of himself enough to make a play, but does pressure Richardson into the B gap vacated by the two Texas defenders. 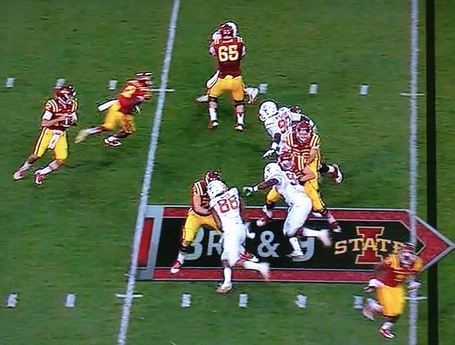 Richardson scrambles and slides for a first down as Tim Cole gets caught between trying to pick up the running back out of the backfield and stopping Richardson, lacking the lateral quickness to accomplish the latter.

It wasn't until the second quarter that Richardson started doing consistently serious damage to the Texas defense with his feet on scrambles.

The first such scramble was the most painful -- Texas had backed up Iowa State to their own end zone and looked poised to quickly get off the field with a three-and-out stop by the defense.

After trying the stab move earlier, Jeffcoat hits the Iowa State left tackle with an inside move this time. Unfortunately, defensive tackle Desmond Jackson tries an outside pass-rushing move and vacates the interior gap, through which Richardson runs for the first down. And though the Instagram post terms Jeffcoat's pursuit as a half jog, upon further review it looks like he might deserve credit for a full jog.

So good for him.

Five plays later, the Texas defense had forced another third and long -- after giving one up when Quenton Bundrage punked Carrington Byndom despite being interfered with.

The new twist on the same story is that defensive coordinator Greg Robinson dials up pressure with his linebackers and twists the defensive tackles. The only thing those four players accomplish is managing to all end up in the same spot, as Jeffcoat goes back to an outside pass rush and fails to put any pressure on the quarterback, but does leave a gaping running lane through which he can escape. 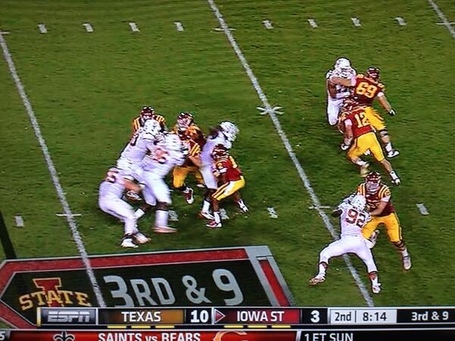 Richardson obliges, picking up 21 yards because, well, the linebackers are both caught up in that mass of players at the line of scrimmage and don't have the recovery speed to quickly chase down the athletic Richardson.

The first and most glaring problems relates to the coordination of pass rushes from the Texas defensive linemen. Jeffcoat can't afford to try outside pass-rushing moves against a mobile quarterback, especially since his quickness isn't elite enough to win with a pure speed rush and though he is good technically, he doesn't have the physical tools of Alex Okafor in terms of length and strength.

After the game, former head coach Mack Brown bemoaned the lack of gap integrity on pass rushes by Texas, noting that it had been a point of emphasis for the team in practice that week.

Texas defensive coordinator Vance Bedford has seen the film from last season and has been making similar points to the defense again this season.

"Sam Richardson is a guy that I like a lot," he said on Wednesday. "I wish that he wasn't playing in this game. He makes me nervous because he can run around. He's given every team he's played this season problems just containing him. When he gets outside the perimeter and starts throwing the football, he's a dangerous player. You go back to last year when they played us, he gave us some problems running around. He had some big throws. We must do a great job containing him in the pocket and make him beat us by sitting in the pocket."

The Longhorns have done a better job of that over the last several weeks, harassing Baylor quarterback Bryce Petty and keeping him in the pocket, while doing the same against Oklahoma quarterback Trevor Knight in the Cotton Bowl last weekend.

Of the two, Knight is probably the better comparison for Richardson, as both have more impressive athleticism than a glance at them might suggest, though Richardson is a solid 221 pounds compared to the 200-pound Knight.

Senior linebacker Steve Edmond is a player who may draw the assignment of keeping this eyes on Richardson at times.

"The things we are doing defensively plays to his strengths," said Bedford. "We blitzed him quite a bit. We've had certain defenses where he has to spot the quarterback. He is a great open-field tackler. Outstanding athlete. We try to put him in position to do the things he's strong at."

The Baylor game was Edmond's best in a Texas uniform and his performance against Oklahoma featured some strong and decisive plays as well.

Playing redshirt freshman defensive end Naashon Hughes could help as well -- he's undersized right now for a defensive end at about 230 pounds, but he has the athleticism to turn and chase Richardson down, as he showed last week when closing on Knight outside of the pocket with alacrity.

There were hardly any guarantees that Richardson would be the starter in this game entering the season, but he held off 2013 late-season starter Grant Roschach in August to regain the No. 1 spot on the depth chart.

So far, the interception rate for Richardson is rather high this season at 3.1%, but three of his four interceptions came in the first two games, meaning that he's gone the last four games and 167 pass attempts throwing only one pick.

Against Baylor and Oklahoma State this season, his bigger issue was accuracy, as he turned in matching 17 of 39 passing days for a completion percentage of 43.6 in each game. Oddly enough, the Iowa State offense has either been efficient completing passes and incapable of big plays (against Iowa and Toledo) or inefficient and capable of big plays (against Baylor and Oklahoma State).

The big-play target is 6'5, 221-pound freshman Allen Lazard, a product of Urbandale, Iowa who committed to the Cyclones because of family connections to the school and remained committed throughout the process despite heavy interest from major programs like Notre Dame.

Averaging 14.48 yards per catch, he'll be a challenge for Texas junior cornerback Duke Thomas, who is probably happy not to see Quenton Bundrage. Last season's big-play threat tore his ACL early in the season and notably torched Thomas for a 97-yard touchdown catch last season that will likely remain as the longest play in Iowa State history for quite some time.

Fortunately, Thomas sees himself as a much better player after a year of growth.

"I was young," he said on Tuesday. "Everything I see on film was bad in my own eyes. Just watching myself how I've grown so much and how I play now versus last year is a big difference."

On the other side of the field, Texas will have to deal with 6'5, 219-pound sophomore D'Vario Montgomery, who may have had a breakout game last weekend against Toledo in catching nine passes for 90 yards, a game that now accounts for most of his 2014 production.

According to Bedford, one of his big concerns is senior tight end E.J. Bibbs. Called a match-up problem by the Texas defensive coordinator, the 6'3, 265-pounder leads Iowa State with 22 caches and four touchdowns.

Since the Horns have effectively schemed to prevent big plays over the top defensively, the guess is that the Cyclones aren't quite good enough to exploit the defense in a way that the Bears and Sooners were not capable of doing. As a result, the bigger concerns are stoping the run, where Iowa State ranks No. 32 nationally in S&P, and keeping Richardson in the pocket so he can't make plays with his arm and legs.

The odd thing about that No. 32 ranking, though? The per-game and per-carry statistics for Iowa State all look mediocre -- this is a team that has faced some good run defenses, but hasn't achieved much success against any of them.

If Texas can't rush with better integrity than last year, especially on third downs, Richardson has proven that he has the capability of exploiting those lanes and extending drives. With Edmond to deploy as a quarterback eraser and potentially better discipline in maintaining proper rush lanes under the new coaching staff, the Horns should be better prepared to deal with that threat.