Most of the plays won't be legal, but the Longhorns will just have to deal with that.

The perception of Kansas State Wildcats head coach Bill Snyder is that he's an old-school coach and while that's true in many ways, the Texas Longhorns will have to deal with a variety of modern pop-pass concepts that put defenders into conflict.

Kansas State senior quarterback Jake Waters has masterful timing when choosing when to run on these plays, but as a passer, his reads are made much easier by these plays, many of which stress the middle linebacker or other second-level defenders. Sometimes even cornerbacks.

Last week against the Sooners, the Wildcats tied the game 11 minutes into the first quarter when Waters hit fullback Glenn Gronkowski on a quarterback draw/pop concept that Gronkowski took 62 yards for a touchdown.

The Oklahoma safeties got cleared out on the play and Gronkowski was able to run past the play-side linebacker, who was so keyed in on the run that he never even really saw the Kansas State fullback running past him. By the time safety Ahmad Thomas recognizes Gronkowski running free down the field, he was too far behind to get back in the play before wide receiver Curry Sexton was in position to make the final block for his teammate.

Here's a look at a diagram of the play:

Back in August, when SB Nation's Ian Boyd profiled the rise of the pop pass in college football, he discussed the exact play that Kansas State used to create the big play against Oklahoma:

Everything the middle linebacker has ever learned about football tells him to charge and meet the lead block as close to the line of scrimmage as possible, preventing a crease from forming for the runner. But during pop plays, that aggressive instinct is turned against him. Maybe the fullback is going to feign a block and run past the linebacker, becoming a receiver. Maybe a tight end or slot receiver is going to run into the space that the linebacker is responsible for in pass coverage.

The quarterback inches toward the line and makes a quick read. Is the linebacker attacking? Throw the easy pop pass over his head. Is he hanging back in hesitation? Run through the crease.

Texas defensive coordinator Vance Bedford has seen the film and knows that his defense will have to be sound against those pop passes.

"It comes back with discipline, knowing your assignment, what your responsibilities are, situations, and when it pops it can't go for 70 yards," Bedford said on Wednesday. It's got to be 20 yards so you can lineup and play again. The whole key to that is making them drive the football field. Make them go 80 yards in 15 plays instead of going 80 yards in 6 plays. When you do that, good things can happen for you and that'll be key for us."

The point by Bedford about forcing methodical drives is a deeply engrained philosophy for head coach Charlie Strong and his defensive coordinator, but it holds especially true about the Wildcats -- while the team ranks No. 9 in explosive drives, it ranks No. 100 in methodical drives.

Take away the big plays and the Kansas State offense is extremely average. The overall number of plays over 10 yards is not impressive (in the 80s nationally), but a closer look reveals that the slow pace of the offense has a big impact on that ranking -- the Wildcats rank near the bottom nationally in plays this season, but have gained 10 or more yards on 22% of their plays.

By contrast, Texas A&M leads the country in plays of that distance and run as many as anyone in the country, but their explosive play rate sits only 3% higher than Kansas State.

Some of the necessary discipline to stop those explosive plays will involve understanding tendencies. Even the play-by-play guy calling the game against the Sooners last weekend recognized what the Wildcats like to do with Gronkowksi in the game.

"When it pops it can't go for 70 yards. It's got to be 20 yards so you can lineup and play again."-- Texas DC Vance Bedford on KSU pop concepts

The sophomore fullback has only three carries in his career (and a mere four catches this year), so he's not likely to get the football on a hand off when he's in the game and Kansas State often uses him as the lone back in the sets that make frequent use of the pop passes that include the quarterback runs the Wildcats use so effectively.

But even though there are some definite tendencies, the conflicts multiple players on the defense will be in when they get read on the numerous pop concept variations will test more than one player throughout the game -- just knowing the tendencies won't be enough.

Going into the Iowa State game, the defense had been the most consistent unit on the Texas team, but senior linebacker Jordan Hicks noted on Monday that a lack of discipline and eye control hurt the Horns against the Cyclones last weekend.

Left unsaid was the fact that an effort like that won't be good enough because the Wildcats will break off big plays like the one that Gronkowski made last weekend if that happens.

Bedford believes that a lot of the battle is winning on first down.

"Second down and medium, if they do a pop pass, it's hard to defend because it's not a good situation for us defensively but we have to execute," he said. "Sometimes you need to tackle a guy, that's what you need to do to keep it from going past the line of scrimmage."

Easier said than done, it turns out -- Kansas State is averaging over five yards per carry on first down this season, including a 53-yard run and first downs on almost 13% of the attempts. Through the air, Waters has produced first downs on nearly 30% of his throws, including the pass to Gronkowski and those attempts are going for a robust 8.9 yards per attempt.

How does Texas help hold such an explosive offense in check? Bedford thinks it comes down to the defensive line.

"We need to get more pressure from our front four, so we can play straight out coverage and some zones and man and mix things up." said Bedford. "We also have to continue to pressure. When we pressure and we have people one on one, they need to win those battles. Right now, we aren't necessarily winning those battles. When one guy can block us, it's difficult to defend things some times."

As usual, then, the Texas defensive line will be relied upon to make big plays. Nothing new there.

And, as Boyd mentions, the pop plays are difficult to defend because the keys that linebackers normally use to flow to the football, like watching whether offensive linemen are run blocking or pass setting, are completely destroyed, but what makes it even more difficult to defend is that many of these plays are not technically legal. 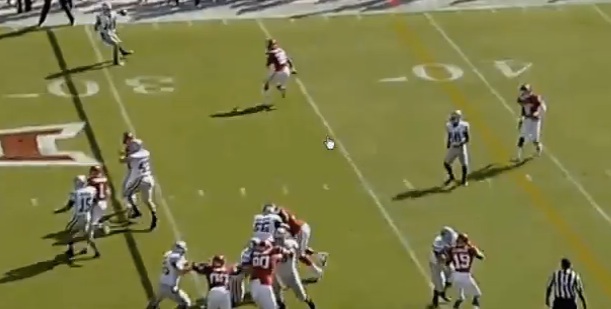 A look at the play by Gronkowski reveals that a lineman was well past the three yards on that play, too.

Oklahoma defensive coordinator Mike Stoops was upset after the game about plays like the two just mentioned.

"The linemen running down the field and trying to throw a pass when they're five yards down the field, to me is ridiculous," Stoops said on Tuesday evening. "Football has gotten to where it is stupid, letting guys run [running] plays then throw the ball. I'm just not a big fan of it -- it's lenient and all of a sudden it's three, four, five yards.

"Once you get to a certain point it's not even fair."-- Mike Stoops on OL well downfield

"Once you get to a certain point it's not even fair."

While the Oklahoma defensive coordinator didn't reference any specific team, it doesn't take a lot of reading between the lines to know that a lot of his frustration stemmed from having Kansas State linemen get far downfield last weekend in the loss.

Unless the public complaining from Stoops makes a difference in pushing the conference to enforce the rules, offenses will likely be able to continue running those plays without telling the linemen to become concerned about how far downfield they are, as Boyd said that the Big 12 rules guy he spoke with at Media Days this year gave the impression that the conference would rather have exciting offenses than follow the rule.

So it's unlikely that there will be any changes this weekend, as even Stoops admitted that his main goal is to merely have the rule revisited in the offseason.

If Texas can't limit the pop concepts run by Kansas State to short gaines and give up some backbreaking plays?

Well, that would make it another in a line of heartbreaking days days in Manhattan for the Longhorns. 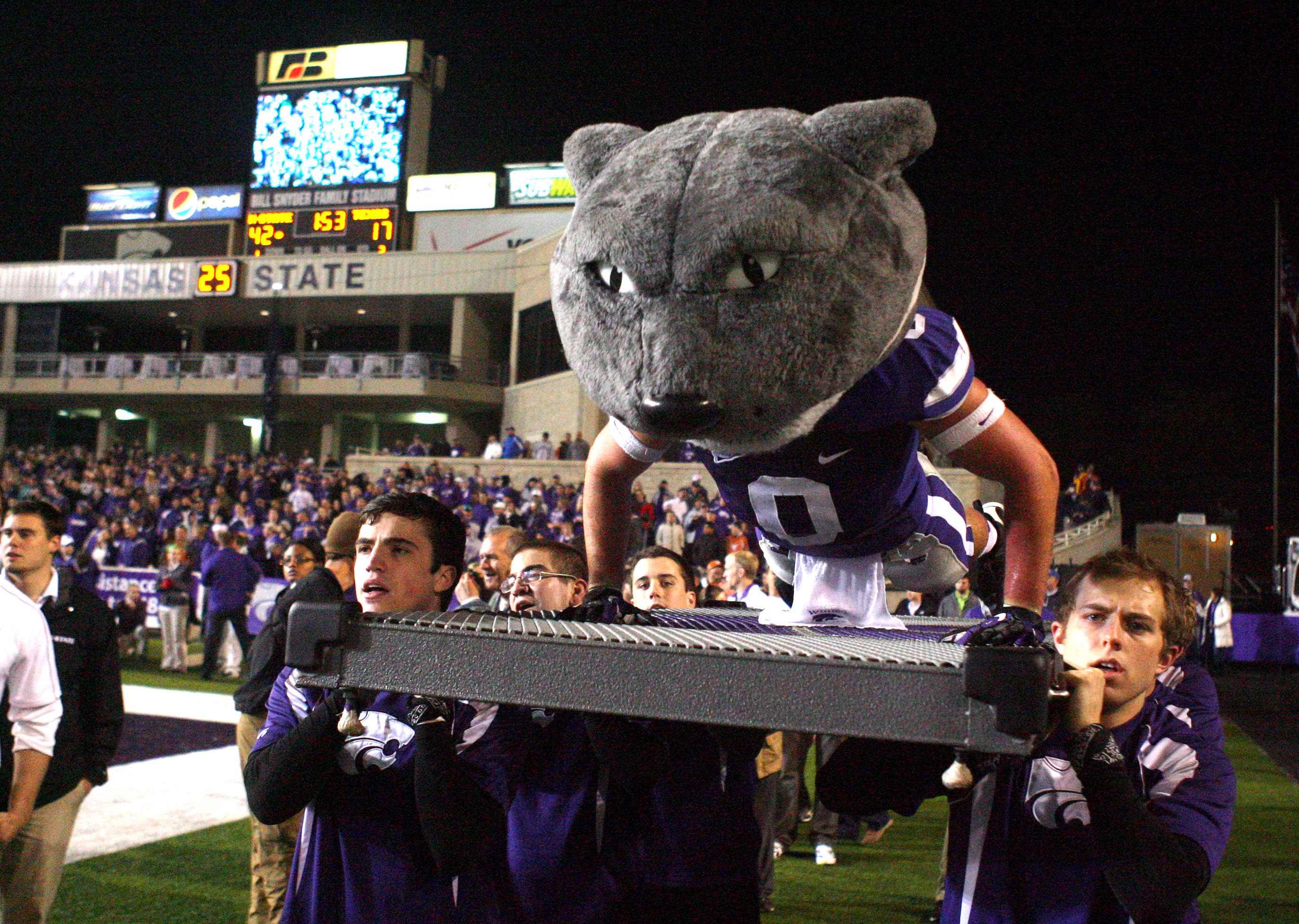