Daily Round Up: Plan Ahead, Boys

Share All sharing options for: Daily Round Up: Plan Ahead, Boys

"It’s nice to come back and play better than we have the past two games. I thought we had some guys who were a little more relaxed and focused." - Rick Barnes [Dallas Morning News]

Rick Barnes has gone from heel to hero. [Inside Texas]

Is Texas the basketball team to beat this year? [Rant Sports]

The men's basketball team will participate in a barnstorming event in 2018. [ESPN]

Mack and UT have come to an agreement. [Dallas Morning News]

Snapchat could be the SEC recruiting dream. They could offer anything they want and it would disappear after a predetermined amount of time. [Yahoo Sports]

You need to be mobile-friendly of you are an assistant college football coach. [Coaching Search]

The NFL wanted Myron Rolle until he was named a Rhode Scholar. [SB Nation]

Are fans a problem for college sports? [Bleacher Report]

Why do fans cross the line? [Tulsa World]

Dumb headline day. Where did A&M steal Manziel from? He was only recruited by a few schools? [Dallas Morning News] 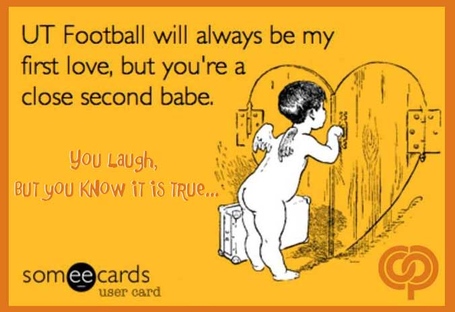 You know you have waited too long to shop for Valentine's Day. Here are some options for staying in her good graces.

How about bacon roses for breakfast? [Instructables]
The University Co-op has some great items. [University Co-op Pinterest]
Even those of us that aren't all that girly still want burnt orange roses. [FTD]