After losing to Baylor in the Big 12 semifinals, Texas awaits its NCAA Tournament fate on Selection Sunday.

If you missed Texas' 86-69 loss to Baylor in the Big 12 semifinals on Friday night (Box), you can spare yourself the replay. Picking up a third win over Baylor this year wasn't in the cards: we got walloped by a talented team that is red hot and -- finally -- playing to its potential.

I noted in my West Virginia recap that Cory Jefferson is in Beast Mode right now, and he Beasted us alright: 16 points and 8 boards (4 offensive) in the first half alone, which combined with a trio of Brady Heslip three-pointers sent the Bears into halftime with a 42-27 lead. Game over.

I'm neither particularly surprised nor worked up by the loss: Baylor is -- at times -- a very good team, and while this young Texas team has achieved a lot, its limitations aren't a big secret. Plus, this is no time to mope: at this time last year we were morosely trying to figure out what the hell the CBI was; come Sunday evening, we'll be trying to figure out how Texas matches up with its opponent in the NCAA Tournament.

Let's talk about that, shall we?

Most importantly, we're in -- safely in -- and that shouldn't be taken for granted. For one thing, well, last year sucked. Really hard.  But beyond that, I place a lot of value on a program's ability to get into the NCAA Tournament consistently. There's an incredible amount of luck involved in how the Tournament itself plays out, and you may be Baylor and make two Elite Eights without playing a seed lower than No. 10, or you might be Texas and get hosed into a second round match up against Arizona in Anaheim when you should have been a No. 2 seed playing somewhere favorable. But one thing's for sure... The NCAA Tournament is like the lottery: you can't win if you don't play.

We're playing, damnit, and that is cause for celebration -- particularly with this young group, who earned their berth with a thoroughly enjoyable, surprising, impressive season. Whether they get bounced in the opening round or the ball bounces their way a few times and they make a run all the way to Jerryworld, Texas basketball fans will look back on this year fondly.

A big part of the luck involved in the NCAA Tournament comes down to your seed and opponent draw(s), so let's do one last projection with a little more than 24 hours to the Selection Show. Given how young this team is and what was expected of them this season, this resume is pretty to look at: 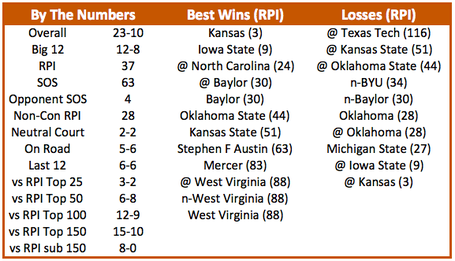 Right now, Texas' consensus seed per the Bracket Matrix is clinging to the No. 6 line, just behind fellow No. 6 seeds UConn, UCLA, and VCU, and just ahead of No. 7 seeds UMass, New Mexico, Kentucky, and -- hi again -- Baylor.  And that feels about right. We've proven ourselves against top competition and have no bad losses to speak of, unless you want to be uptight about losing in Lubbock, which I don't.

Assuming Texas draws somewhere between a No. 5 seed and No. 7 seed, here are our most likely opponents:

Definitely some better draws than others in that pool of teams. I want nothing to do with Harvard, Iowa, Stanford, or Arizona State, for example, but would feel pretty good about a match up with Xavier, SMU, Dayton, Nebraska, or Toledo.

All in all, it feels great to be back in the mix, talking seeds and scouting opponents and speculating like crazy to kill the time until Thursday, when the Madness descends upon us, and at least for a little while, all is right in the world.