Oklahoma and Kansas State join the Longhorns and Cyclones at 10-6 in the race for No. 2 in the Big 12.

Home teams swept the Big 12 on Saturday, including Oklahoma and Kansas State, whose victories over Texas and Iowa State locked all four teams into a tie for second place at 10-6 in conference play. Even the Jayhawks, who clinched the Big 12 regular season title on Saturday when UT and ISU lost, fell on the road, as Marcus Smart's 20-point second half led Oklahoma State to a huge win over Kansas in Stillwater.

After Baylor held off Tech in Waco and West Virginia took care of TCU in Morgantown, here's where things stand heading into the final week of the regular season: 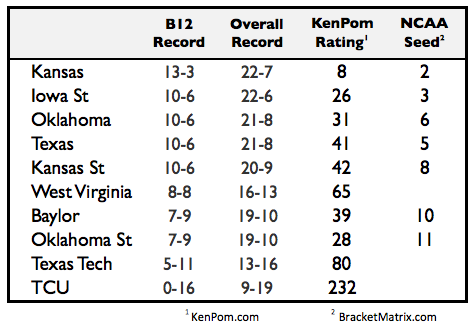 As noted yesterday, among the four teams competing for the No. 2 seed in the Big 12 Tournament, the Sooners are looking good hanks to their favorable remaining schedule and two wins over Texas. For the Longhorns, while they don't control their own fate, if they can win their final two at Tech and versus TCU in Austin, it's likely they'd wind up the No. 2 or No. 3 seed in the Big 12 Tournament, assuming Iowa State (at Baylor, vs OSU) and Kansas State (at OSU, vs Baylor) drop one of their final two.

The Longhorns' big men showed up to play in Norman, but Isaiah Taylor apparently was the only guard who got off the bus, and OU swept the season series with Saturday's win in Norman. How badly were Texas' guards outplayed by their Sooner counterparts? It wasn't even close:

Javan Felix is two completely different players at home and on the road; over Texas last 8 games, he's shot 17-28 from beyond the arc in four games at the Erwin Center, and 5-27 on threes in the four away from home. When Felix isn't scoring, that makes it awfully hard to carry Holland's meager offensive contributions for 33 minutes.

On the other side of the aisle, kudos to Lon Kruger and OU for a big win in a game they really needed. While we didn't have any trouble with Jordan Woodard and it was nice to see Cam Clark play like the mediocrity he's always been in the past, we had no answer for Isaiah Cousins, who carved us up for 24 points. The sophomore shooting guard is a hell of a competitor, he's got a solid jump shot, and he can score in a variety of ways. Color me impressed.

The other half of the four-way tie owes to the Wildcats' big win over the Cyclones in Manhattan yesterday, which continues K-State's season-long Felix impersonation: the Wildcats haven't been anything special on the road (just 2-6 in Big 12 play) but have been lethal at home, where they're a perfect 8-0 in conference play. Nice job by Bruce Weber, who's showing this year just how valuable protecting home floor is in this conference: despite a roster without any real go-to scorers and no quality wins on the road to speak of, the Wildcats are going to go dancing again this year because they've been unbeatable at Bramlage.

The losses by Texas and Iowa State made it 10 straight seasons with the Jayhawks winning at least a share of the Big 12 title, but they didn't get to celebrate because Marcus Smart exploded in the second half to bury the Jayhawks in Stillwater. The loss doesn't mean much for Kansas, but it meant the world for the resurgent Cowboys, who after dropping seven consecutive games, the last three for which Smart was suspended, have now won three in a row since Smart's return.  Big Monday in Stillwater is a tough draw for Kansas State now that the Cowboys are alive and kicking again.