Tonight's game was wonderful, exciting, and strange. Most importantly, it wasn't the last game of the season.

Cameron Ridley got off a last second shot much closer to the basket than Paulino was when he shot Texas into the Elite Eight back in 2006, but don't let the proximity to the rim fool you: Ridley's shot was every bit as difficult in its own way. The big fella had to scoop up a loose rebound from his knees, rise, shoot with his left hand, avoid one of the nation's premier shot blockers, and make the basket. All in less than a second.

Ridley managed to do it, though, his buzzer beater lifting Texas to an 87-85 in its opening round match up against Arizona State.

What a great, great college basketball game. And what a strange one, as well. If you'd have told me before the game that Jonathan Holmes was going to be ineffective for most of the game and Arizona State was going to put up 85 points on 54% shooting, I'd have assumed I was getting ready to watch Texas lose by double digits. But here we are, in large part because the Texas offense looked a whole lot more like that of its next opponent -- Michigan -- than the one that struggled down the stretch of the Big 12 season.

For a while, it looked like Texas might pull away from the Sun Devils, as the Longhorns opened up a 14 point lead midway through the second half. But ASU came roaring back, aided in part by some generous officiating that sent Jahii Carson to the line any time Texas breathed on him, and in part by a barrage of three-pointers, including four from Jonathan Gilling.

This group of young Longhorns once again showed incredible mental toughness, however, answering with big buckets when ASU managed to tie the game or retake the lead. It felt like one of those games where you just knew as your team's lead evaporated that the game was going to end in heartbreak. And it did, just not for who I expected.

Kudos to this team for doing what it's been doing since holding off Mercer way back in November. Because there's nothing more satisfying than doing it in March.

* Gilling's four second half threes were a microcosm of a game-long problem for our young defenders, who did a good job helping one another to keep Carson from teeing off, but seemingly did so at the expense of identifying ASU's two lethal shooters: Gilling and Jermaine Marshall. Although Marshall has enough all-around game to present a defensive challenge in any case, our unawareness with Gilling simply reflected youthful inattention -- we're talking about a player who took 152 of his 191 shots on the season from beyond the arc, and connected on 43% of them. We'll need to be much more cognizant of Michigan's shooters if we hope for a different result; the Wolverines can fill it up from three-point range in a hurry.

* When early in the game Demarcus Holland wasn't making much of an impact and Texas was playing some zone defense, I wondered aloud what we were getting out of his minutes. It didn't take long for Holland to answer that question definitively -- as he has more or less all year -- with a tremendously valuable performance, including on the offensive end, where he finished with 14 points on 6-of-6 shooting from the field and another 2-for-2 from the free throw line.

* How impressive has Martez Walker been over the last six weeks? He's been coming on strong for a while now, but he was absolutely terrific tonight, delivering a performance without which we would have lost. It was about a month ago that I wrote in an email to Jeff Haley that it appeared Texas was one guard short this year, and that would have been the story tonight but for Walker. From the moment he entered the game, he began delivering the fuel that has powered all of Texas' big wins this year: guards aggressively attacking the rim. Playing 22 minutes off the bench, Walker trailed on Ridley on the team in scoring, finishing with 16 points on 3-4 shooting, including 1-for-1 from three-point range and 9-for-10 at the charity stripe, and over his last four games he's now averaging over 11 points per game. This team desperately needed one more guard, and Walker was that player tonight.

* Speaking of which, you have to give Rick Barnes a lot of credit for the way he managed Texas' personnel tonight. A full six different Longhorns scored in double digits -- Ridley (17), Walker (16), Holland (14), Taylor (11), Holmes (11), and Felix (11). He mixed and matched personnel beautifully tonight, getting the most out of his whole roster on a night when we weren't going to be able to ride the coattails of Taylor and Holmes to victory. We put up 87 points, nobody fouled out, and Ridley was on the floor for the final shot of the game: none of that happens without the full range of contributions Texas enjoyed tonight. I know we've all had our gripes with Barnes' substitution schemes at times, but he's done a terrific job with this roster all year long and never better than tonight.

* I expect we'll hear a lot of calls for Walker to start over Felix, and though I'm sympathetic to the argument, I'm more interested in that as a question for next year. For Saturday against Michigan, I like Felix better when he's starting a game and playing within the flow of the offense and don't like seeing him come in off the bench, where he at times disrupts the offensive flow we have going. I would start Felix against Michigan and utilize Walker's energy and aggression coming in off the bench. I think it makes both the starting and relief units better.

* I'm pretty impressed we were able to win with a relatively quiet night from Jonathan Holmes, but am no less skeptical of our chances to pull off the upset over Michigan without a strong game from Holmes. The good news is that I thought he did a nice job despite being just a little bit off; it was the kind of night that could have sent a star player into a vicious cycle, but by and large Holmes managed to play within himself and the game, and actively found ways to chip in value. It looked to me like he was just a little bit rushed on his shots tonight, but beyond that I mostly saw a player having one of those nights where the ball didn't bounce his way. Here's to hoping so, anyway, because his ability to stretch the defense just opens up the floor so much for Taylor and Ridley to operate in the paint.

* Texas' offensive outburst despite a quiet night from Holmes was just one of numerous aspects of the game that bucked a trend. Both teams played much better halfcourt offense than was expected of either heading into the game, and the color commentator on numerous occasions found himself gushing about... the excellent job Texas was doing moving on offense. As in, not standing around. And we really did do a great job in that regard tonight: we ran sets well, we set crisp and well-coordinated screens, our interior passing was largely excellent, and we did a really nice job with spacing. And that's how you wind up making 26 of 46 two-point shots (56%) and 5 of 12 from beyond the arc (42%), with 17 of those buckets being assisted.

* Not to be overlooked: just 9 turnovers in 70 possessions. Outstanding.

* Looking at the "Four Factors to Winning," notice any other surprises? 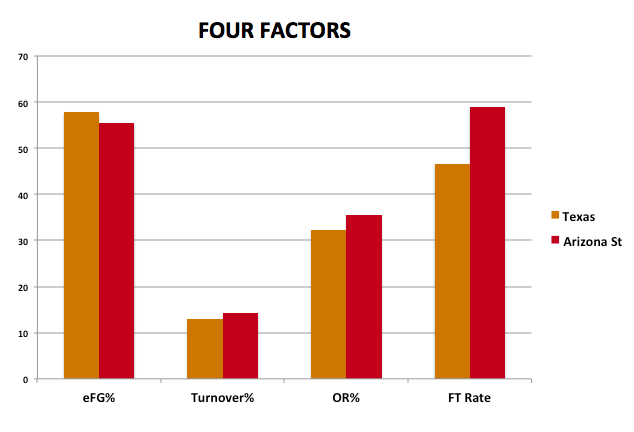 Notwithstanding everything I wrote about ASU this morning, it was the Sun Devils, more so than the Horns, thriving on the offensive glass. Of course, they did struggle mightily to stop us in transition, so poor Herb Sendek must be agonized.

* Much more on Michigan tomorrow and Saturday. For now, enjoy this win, and tomorrow's full slate of games. May they be half as exciting as today's.