The Wolverines ended Texas' season with a barrage of three pointers.

With 15:39 remaining in the first half, Texas held a 6-3 lead and Michigan had just turned the ball over, throwing an errant pass right to Javan Felix near the top of the key. Upon receiving the gift, Felix immediately took off on a fast break, but had two Michigan players between him and the basket and all of his own teammates trailing him on the play. He should have pulled up and waited to set up the halfcourt offense, but Felix tried to take it all the way to the rim himself.

Unsurprisingly, the undersized guard taking it up against a pair of 6'6" defenders lost that particular battle, missing the contested shot at the rim. More importantly, Michigan grabbed the rebound just as Felix's teammates were making it to that end of the floor. The result? A transition opportunity for Michigan the other way, ending with Nik Stauskas burying a wide open three.

That wound up the first of five Michigan three pointers over an eight-minute span, across which Texas' 3-point lead turned into a 30-12 advantage for the Wolverines. From that point on, Texas would outscore Michigan 53-49, which was a good, admirable effort but not enough to overcome the big first half deficit. Final score: Michigan 79 Texas 65. [BOX SCORE] Game over. Season over. 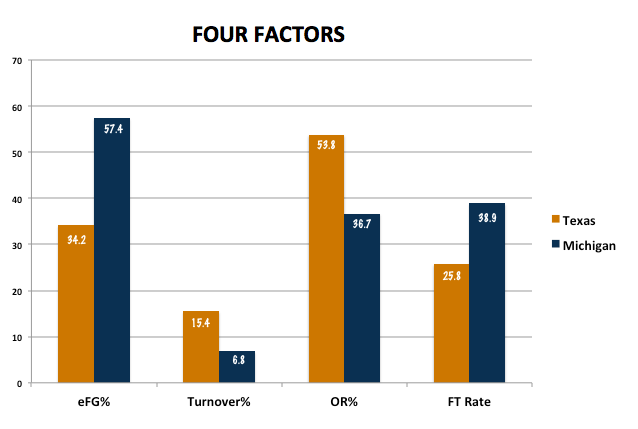 Tip your cap to Michigan, who played an outstanding game in just about every facet (defensive rebounding was an issue, obviously). The Wolverines notched a ridiculous 57.4 effective field goal percentage by setting a school record for three pointers in a game, making 14 of their 28 attempts from beyond the arc. I'd be curious to know how often a team that made 14+ three-pointers wound up losing the basketball game; I'd guess that it's less than 10 percent. That's just a lot of extra points for any team to overcome, and especially a team that doesn't score three points at a time very well, like Texas. I noted in my keys to the game that my biggest fear was being three-point bombed to death, and unfortunately that's precisely what happened.

Texas really worked the offensive glass hard, particularly in the second half, and defensive rebounding very well could have cost Michigan the game except that they made up for it in part by taking exceptionally good care of the basketball: just 4 turnovers in 59 possessions.

* Martez Walker showed for the second straight game why he needs to be starting next year, but I heard a lot of people griping that things could have been different had we played Walker in the first half. It's understandable that people missed him, but he was out there on the floor in the first half when Michigan opened up their big lead, extending a 16-10 lead to 25-12.

In other words, it was a team failure in the first half, and Walker was a part of it, like everyone else. I do think you have to give him a lot of credit for the run Texas went on in the second half: Texas trailed by 16 when he entered the game at the 17:12 mark of the second half, and Texas went on a 17-7 run to cut the deficit to 58-52 with 8:00 to play.

In any case, it's definitely noteworthy that Barnes never substituted Walker out of the game once he entered in the second half. As I've detailed at various times, Javan Felix does have his useful traits and can be a modest asset to the roster, but there's no question that his limitations are too substantial to carry him as a starter. From his shot selection to his poor defense, Felix can be a drain in a lot of different ways, and it'll be important that we use him appropriately next year, with the starting job and extra minutes distributed among Walker, Kendall Yancy and Damarcus Croaker (if he stays).

* FInishing up the thoughts on Felix: tonight's game perfectly encapsulated how he can be such a frustrating player. He finished the game with 8 points in 21 minutes, but took 10 shots to score them, all while failing to close out properly on perimeter defense, allowing Michigan's sharpshooters to rise up and rain fire. I was fine with the decision to start him for this game, but again, looking ahead to next year, it's important that he assumes a diminished role in the rotation.

* I have to put a chunk of the blame for the first half fiasco on the coaching staff, as we came out of the gates seeming to be poorly prepared for the game at hand. Our defense of the pick and roll was criminally negligent, our halfcourt offense failed to press our advantages, and we generally played right to Michigan's strengths for much of the first half. To be fair, I thought Barnes and his staff did a really nice job in the second half, but by the time they steadied the ship, the fatal blows had already been struck. Part of our struggles were of the "youth and inexperience" variety, but much of it was not and is ultimately the responsibility of the coaching staff.

As for that second half, I thought Barnes was insane to play a zone to open the second half, and for a few possessions it was every bit the disaster that I expected it would be, with Michigan either carving it up for easy buckets or beating the zone defenders to the basketball to get second chances on offensive boards. Once we made an adjustment to sag the off ball man into the middle passing lane, Michigan started to struggle and we mounted our run. It wasn't a strategy I would have adopted, but it worked far better than I imagined it would.

* Isaiah Taylor played his heart out tonight, and did his best to get us back in the game, but like the team as a whole, it just wasn't quite his night. The freshman point guard finished with a game high 22 points in 38 minutes played, with 2 boards, 5 assists and 3 turnovers, but it took Taylor 22 shots to get there, as he just couldn't get a good number of his floaters to fall tonight. He also took a handful of long two-point jumpers that were ill-advised, but I'm nitpicking here. Everything he did tonight -- good and bad -- was a product of his competitiveness and effort, and he finished a hell of a season with a hell of an effort, even if it wasn't quite enough.

Speaking of which: upon closing out the year, Taylor enters my pantheon of UT freshmen who I loved way too much, along with KD, PJ Tucker, and Terrence Rencher.

* I'm not sure what to make of Jonathan Holmes' so-so play in the NCAA Tournament. He's hit three-pointers as time expired on two separate occasions, so I don't think he's afraid of the big moments, but he definitely seemed on edge over Texas' two Tournament games, particularly with his jump shot, which was off from start to finish. We needed more from him if we were going to make a real run.

* We were so scattered to start the game that we never really were able to establish our frontcourt advantages with any consistency. We took a lot of jump shots and took them early in the shot clock, essentially giving Michigan's biggest weakness a free pass. Unable to get in any kind of rhythm, Cameron Ridley worked hard on the boards but wasn't quite able to really get going. While I'm thinking about it, I do have one note for Cam, though: don't dribble the ball unless you absolutely need to. The only reason it doesn't cost him more than it already does is because he has great hands.

And with that, we'll call it a wrap for now, returning next with a season assessment, personnel review, and look ahead to 2014-15.

In the meantime, let me close out with a grateful standing ovation for this year's team. They weren't a great team, but they had some great wins and they surpassed all reasonable expectations, and did it all delivering entertaining and encouraging basketball throughout the year. This hyper-young team today will be a really interesting -- and pretty dangerous -- group next year, particularly if we're able to sign Mr. Myles Turner (on whom I'll have an update soon).