Texas A&M Aggies at crossroads between work and play with need for "boot camp"?

After numerous arrests of A&M players, Kevin Sumlin is making changes in the midst of recruiting momentum that may be slowing.

Share All sharing options for: Texas A&M Aggies at crossroads between work and play with need for "boot camp"?

Are there discipline issues with the Texas A&M Aggies football team and could those problems help Texas Longhorns head coach Charlie Strong sell his tough-love mentality to recruits in the state of Texas?

After a string of arrests for the Aggie football team, head coach Kevin Sumlin has enlisted an outside consulting firm to come in to help create some discipline for his team:

Given the rhetoric passing back and forth between the two schools as it regards what gets sold to recruits, the irony here is that the "boot camp" mentality coming to College Station in intent is basically the same as the one that new strength and conditioning coach Pat Moorer and Strong have been preaching with the Texas team. 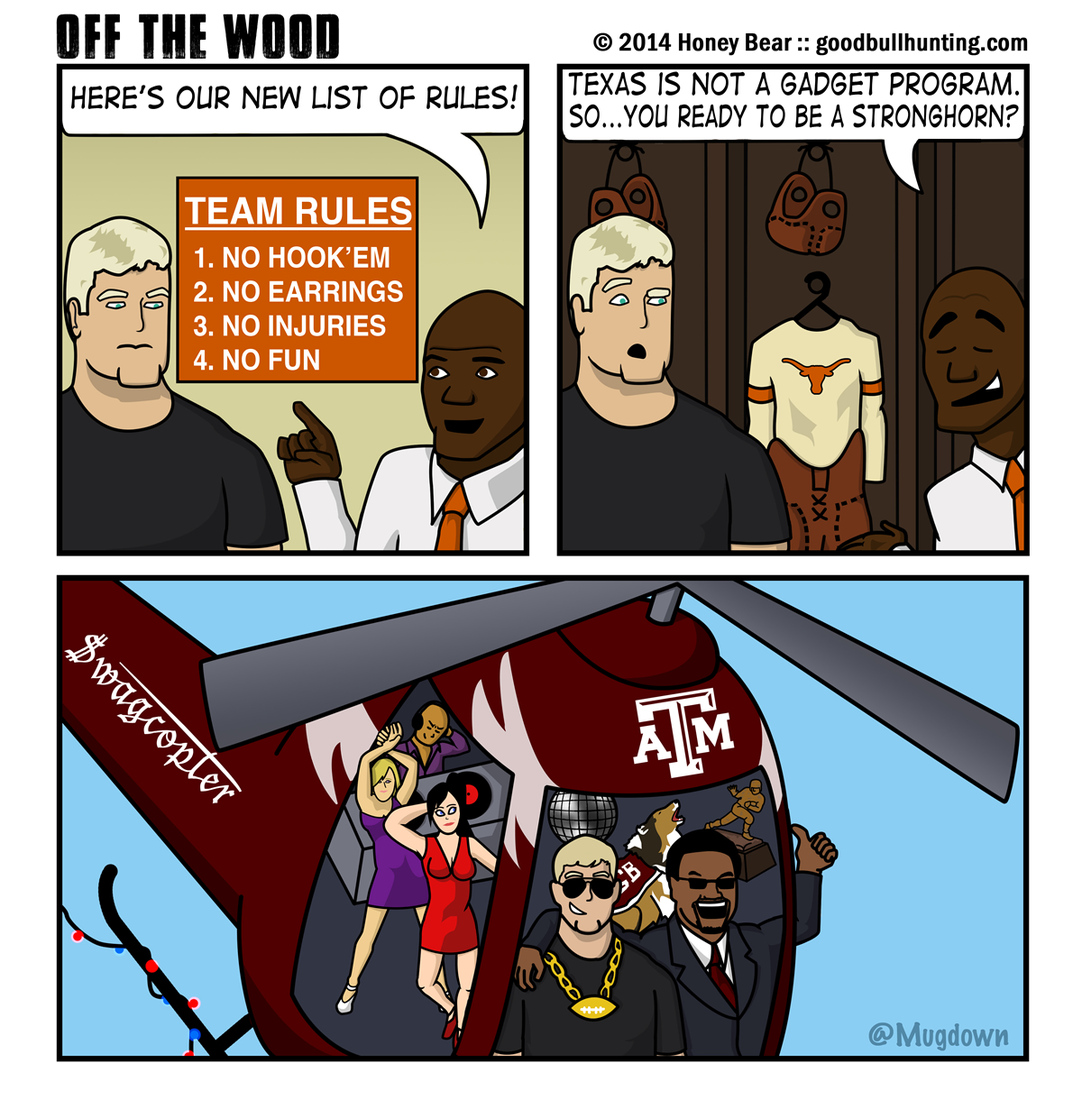 The new Texas head coach has also made it clear that he's not going to compromise his vision of what the team needs to be to put the T back in Texas -- there won't be a "gadget program" in Austin -- from making players move back on campus to forcing them to sit in the front row of their classes, to his rules about drugs and how to treat women.

In other words, a boot camp-type atmosphere that contrasts starkly with the good-time Aggies.

Meanwhile, Texas A&M tight end commit Jordan Davis made his second visit to Texas in a matter of months for the spring game and left at halftime disappointed in the play of the quarterbacks, as related to current A&M quarterback Kyle Allen.

It didn't go over so well with the burnt orange faithful on Twitter and two days later, Davis was still hearing about his high-profile exchange with Allen from Texas fans:

Why is Texas fans still harassing me and @KyleAllen_10 ?

The experience of interacting with garbage Texas fans on Twitter perhaps played some role in the highly-rated tight end's mindset when he discussed the trip with TexAgs. Davis talked about his dislike for the "boot camp" atmosphere at Texas, exactly what Texas A&M needs right now, in the estimation of Kevin Sumlin:

Another reason why I’m not worried about Strong. From @_jdavis15 via @TexAgs. pic.twitter.com/3i0PgYNIeu

The comments from Davis strike at the aforementioned dichotomy of what each coach is selling -- Sumlin a fun, laid-back atmosphere and Strong hard work and strict rules.

And so suggesting a cause-and-effect relationship between the atmosphere at practice and around the program and the recent string of arrests at A&M would seem more pertinent as a result of the tacit admission by Sumlin that the team needs some changes.

Needs some of that "boot camp" in their lives.

Again, exactly what Charlie Strong has been preaching at Texas.

The feedback from the parents has been positive for the Strong regime -- his genuine concern for his players and interest in their growth and success while at Texas and afterwards is part of the trust-building process and it's not fake and it translates to his expectations every day. It seems like it is translating to people to whom he can pitch that vision.

How are parents of recruits feeling about what's happening in College Station right now?

It's not that Sumlin doesn't care, he's just acknowledging a problem he can't fix himself.

For the first time since the move to the SEC, there look like there could be some chinks in the A&M armor, though the upcoming season will ultimately play a more significant role in the narrative surrounding the team, with a resulting impact playing out in recruiting.

Just how bad were things at the beginning of March? Take a trip down memory lane.

Until then, it's all about what happens off the field and the recruiting efforts of the two respective programs.

The Longhorns have now won several recent head-to-head battles with the commitments of safety/outside linebacker DeShon Elliot, who has one current teammate committed to Texas A&M and two former teammates in College Station, and offensive tackle Toby Weathersby, currently the top-rated Texas commit in the class.

With the decommitment of Katy running back Rodney Anderson on Wednesday evening, the ratio of Texas A&M commits with Texas offers to Longhorns pledges with offers from the Aggies is now 7-to-2 after once standing at 8-to-0. And five-star defensive tackle pledge Daylon Mack no longer has anything on his Twitter bio about being committed to Texas A&M. He's been receiving heavy interest from Auburn and visited the Tigers back in February, while a Longhorn fan pointed out that Mack has recently followed three Texas coaches on Twitter.

Maybe it doesn't mean that Mack decommits in the near future. Still, he did make a conscious decision to remove the A&M references and he was admittedly a Texas fan growing up.

The turn in the ongoing recruiting battle between the two schools may end up being a small one or end may end up being a significant one. Getting to watch that play out will be part of the fun with no on-field battles for the teams looming unless a chance bowl or playoff matchup goes down, but it's easier for a Texas fan to feel optimistic now compared to two and a half months ago. A month and a half ago.

Can the Horns take advantage or will a little discipline instilled from outside solve the problems for the Aggies in a big season in which A&M will have to prove it can hang in the SEC in a post-Johnny Football world? The talent has started flowing in to College Station for the first time in years, but can it be focused in the right direction? Can it navigate the nation's toughest conference to a playoff birth?