Getting to Know UC Irvine

Texas takes on UC Irvine on Saturday in the first game of the College World Series. The first step in beating an opponent is getting to know them.

Share All sharing options for: Getting to Know UC Irvine

As you may have heard, Texas plays UC Irvine in the College World Series this Saturday. It'll be a fun baseball contest between two talented baseball teams. There'll be a preview of the baseball contest later in the week, this is not that post.

Instead, I thought it might be a good idea to get to know UC Irvine a bit better. First, Texas has only beaten Texas teams in the NCAA tournament and Texas hasn't played a non-Texas or non-Big 12 team since sweeping Columbia in late March. Second, UCI plays in the Big West and doesn't mosey on down this way all that often. Finally, the last time Texas played UCI they were, to put it bluntly, quite rude to their Longhorn hosts.

That last visit was way back in 2007. UFCUDFF was just Disch-Falk Field and it was getting a facelift so Texas had to "host" its regional at Dell Diamond in Round Rock. UCI came to town at 40-15 and ridiculously seeded as a 2-seed in #4 national seed Texas' bracket. The Anteaters solidly beat Texas before advancing to its first College World Series appearance.

Speaking of rude, there's also this: 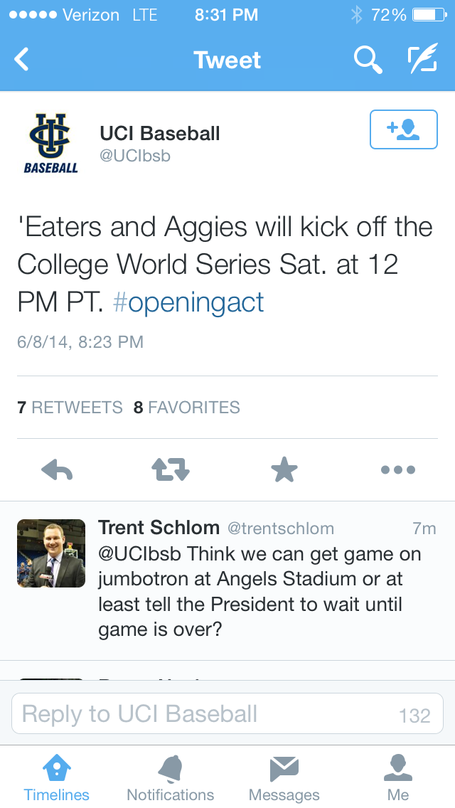 In an effort to get off on the right foot with our Anteater foes, Abram and I reached out to Mark Whicker of the Orange County Register to answer some "get to know you" questions about California-Irvine. Mark has been working the Stanley Cup, which is apparently a hockey thing, so we threw in a hockey question or two as well.

1) What's the mood around UCI? Do people think they can win the whole thing after beating a pair of good OSU teams or are they just happy to be back in Omaha?

MW: I'm not sure there's ever a "mood" around a place like UCI but i think at the moment everybody's happy to get there. Once it starts, of course, they'll want more, but it's only the second time they've been.

2) UCI went 2-8 over their last 10 to finish the regular season. Was that just an aberration or have they been inconsistent all year?

MW: Their slump lasted too long to be an aberration but they were playing some other Big West teams that were hungry to get in. Then they played their way almost off the bubble. Mike Gillespie thinks they were the last team in the field. Getting in was like getting a second wind and really  took a lot of the pressure off.

3) The Kings are up 3-0 after a couple of exciting games in the Cup Finals. Will anyone in the metro area even notice if the Eaters bring home LA's second straight CWS title?

MW: UCI is a relatively new school. They have a growing alumni base, but a lot of students are academic strivers and aren't really plugged into sports. They've won national champions before, three of the last seven in volleyball for instance, but I think this will be significant because they had dropped the program in the 90s before Dan Guerrero (now the AD at UCLA) brought it back. As for the area noticing, UCLA won it last year and I'm not sure a lot of people noticed. There's just a lot of constituencies here.

4) And follow up: would winning the Cup be that much sweeter because it's against a New York team, or do those of us in flyover country overstate that civic rivalry because of Woody Allen?

MW: No, it doesn't matter that it's NY. They beat NJ last time. The real rivalry for Kings fans was the Ducks, which won in 2007. To win two to the Ducks' one would be a big bragging point for them.

5) Finally, why are they called the anteaters and why do they call the mascot Peter?

MW: The mascot is Peter because it rhymes with Anteater.  The students voted for Anteaters in 1965 just because it was original (UC Santa Cruz's nickname is Banana Slugs). They adopted it  to the "B.C." comic strip and they chant "Zot" as the Anteater did in the strip, and they have an Anteater statue in front of the basketball arena. I wish they had a live mascot but that would probably violate several laws.

So there you have it, folks. Many thanks to Mark for taking the time to answer our questions. If you have more questions you can probably find answers here.