The Longhorns fall in the Alibaba Infomercial, hosted by Bill Walton.

Share All sharing options for: Texas Falls To Washington in Shaka Smart's Debut

Texas rallied from 9 points down in the second half and briefly took the lead with 5 minutes to play, but atrocious shooting and uncharacteristically poor defensive rebounding ultimately spoiled Shaka Smart's Texas debut, as the Huskies closed out the Horns 77-71.  The loss was UT's first in a season opener since a home loss to Arizona in November of 2001.

Before I discuss the game, please take a moment to join me in thanking the sponsor of tonight's festivities, Alibaba Group, and show some appreciation for our vociferous and dedicated emcee, Bill Walton, who was on point from start to finish this evening, not once letting the basketball game being played distract him from hyping Chinese business. 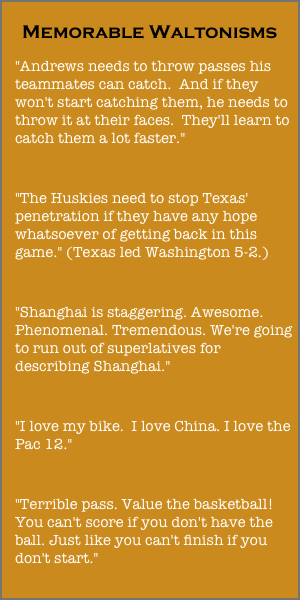 Walton's performance was by far the most impressive of the evening, as he displayed incredible stamina throughout the 3-hour infomercial.  Where others might have been tempted to discuss the basketball game being played, Walton never broke off script, and when he had to, he found topics other than hoops to fill the void.

Kidding aside, I generally like Bill Walton, but good grief that was truly painful to sit through.  I believe that his enthusiasm is genuine, but I'm not sure who the target audience for tonight's broadcast was.  I like Walton when I'm watching a few minutes of some random NBA game I care nothing about; I find his colorful banter and propensity for exquisite hyperbole the perfect complement in that setting.

Oh, and before I forget: I don't know how anyone who watched tonight's broadcast could say that college players shouldn't get paid. They were employees who performed strictly for the purpose of generating profit for corporate entities. Fine, but give them their cut.

Rick Barnes would get crucified for tonight's loss, and while there aren't going to be any pitchforks out for Smart just one game into his tenure, tonight's loss won't do him any favors in terms of ginning up enthusiasm amongst the (football) faithful.  Which sucks, particularly when 'Enthusiasm' is one of your five "Core Values."

A loss is never fun to watch, but this one particularly painful to suffer through, and not just because of the Walton-fueled infomercial. Both the Horns and Huskies shot the ball terribly, and it wasn't merely a reflection of outstanding defense. I'd guess the game context had a good bit to do with it -- the players traveled halfway around the world, were likely jet lagged, and playing in an unfamiliar, Final Four-like stadium with depth perception that's challenging for shooters.

And oh were shooters challenged. Texas made just 19 of its 69 field goal attempts on the night (27.5%), and the Huskies weren't much better (25-73, 34.2%). They might as well have shot three pointers blindfolded: the Horns connected on just 2 of 16 (12.5%), while the Huskies managed only 3 of 17 (17.6%). Poor shooting from the field from two teams playing in Shanghai, in the first game of the season, isn't terribly surprising.

More surprising -- or less excusable, anyway -- was all the bad free throw shooting. With the officials seemingly whistling fouls on every possession, both teams spent large chunks of the evening bricking away scoring opportunities. Washington connected on just 24 of their 40 attempts (60%), while Texas failed to cash in on its primary offensive opportunity by making just 31 of its 48 shots from the charity stripe (64%). In Texas case, the bulk of the blame lies with Texas' two upperclassmen wings, Demarcus Holland (2 of 5) and, especially, Kendal Yancy (5 of 12). Disappointing.

As poorly as Texas shot the ball, Washington wasn't much better.  This game was lost in the paint, where Texas inexplicably allowed the Huskies to grab offensive rebounds on 27 of their 48 missed shots (57%). Some of that was probably a bit of random variation -- bad luck, bad bounces, etc. -- but there were a lot of boards grabbed by Huskies who weren't getting bodied. We did a lot of watching, not a lot of boxing out. That's easy to fix, but it cost us tonight.

I've been looking forward to seeing Texas run Shaka Smart's offensive sets, which generally feature nice spacing and ball movement, but it's evidently a work-in-progress, as our halfcourt offense was ugly for large stretches of the game. There were glimpses of a brighter future, and missing shots will make even the most sharply executed offense look bad, but it was telling that we ultimately abandoned all our halfcourt sets in favor of Isaiah Vs The World.

The junior point guard did what he does best, attacking the rim relentlessly, and getting results. Taylor finished with a career high 27 points on 7 of 16 shooting, including 12 of 15 from the line and 1 of 2 from deep. He was active on the glass with 7 boards, but failed to record a single assist. Of course, when your team only makes 19 buckets all night and you're responsible for 7 of them, there aren't a whole lot of assists to be had, anyway. Taylor was also responsible for the play that best summed up the night for Texas: all alone on a breakaway, Taylor leaped up as if to dunk, then seemed to think better of it (remembering Iowa, perhaps) and tried to lay it in, and wound up missing it altogether.

Let's wrap this thing with a burst of abbreviated player notes:

Isaiah Taylor (27 points, 7 boards, 0 assists, 1 turnover) -- He'll need to play a more team-oriented style for Texas to reach its potential, but it was great to see him in peak form with respect to attacking the rim and drawing fouls. Loved the step-up three; he's a better shooter than most realize. Great sign if he can keep the turnovers down.

Cam Ridley (6 points, 7 boards, 7 blocks, 2 TOs) -- Mostly good stuff from the big fella, who was really disruptive in the defensive paint. He hurt us on several occasions with lazy box outs, though, and got outhustled by Washington's freshman center.

Connor Lammert (3 points, 4 boards, 1 assist, 2 steals, 1 turnover, 5 fouls) -- I keep waiting for Lammert to play with some alpha mentality, he continues to play with a purely complementary mindset. I think we'd benefit from him looking to score more often.

Demarcus Holland (6 points, 3 boards, 1 assist, 2 TOs, 1 steal, 1 block) -- Arguably the winner of the Most Improved Longhorn award for the last 20 years, Holland has a high bar to clear to improve on last year's performance. Didn't happen tonight, as his base limitations were on display. We'd do the team and Holland a service by amping up our aggressiveness in terms of looking for scoring opportunities in transition.

Eric Davis (7 points, 4 boards, 1 assist, 1 TO, 2 steals) -- Love his game, and like what it says about both Davis and Smart that the frosh got the start. Kid is a pure basketball player with some J'Covan Brown in him. Bright future, and he's ready to contribute now. Glad he'll get the chance.

Tevin Mack (7 points, 4 boards, 1 steal, 1 TO, 4 fouls) -- He couldn't get anything to fall tonight (1-10 overall, 0-4 from three), but good things happened when he went to the rack. He's got a lot of learning to do, but the ability is pretty freaky. He needs to shoot a thousand jumpers a day and learn what a good shot within an offense looks like, but he's going to score 25 at least once this season. Excited to see more of him to get a better feel for where he is on his development curve.

Kerwin Roach (2 points, 1 board, 2 TOs) -- A quiet debut, but that athletic ability is truly elite. I suspect he's a better on-ball defender than Holland right now; his feet are quicker. His skill set provides lots of ways he can produce value, and he doesn't need to be a double-digit scorer for this team to be a high value contributor.

Shaquile Cleare (2 points, 5 boards, 1 steal, 2 TOs, 3 fouls) -- Nice skill set for a big boy, but I'm not sure I see where he fits in with this group. Good hands and long arms are never a bad thing to have, though, so I'm game to play wait-and-see.

Kendal Yancy (5 points, 2 boards, 1 assist) -- Yancy did some nice things, particularly in terms of getting to the line, but making just 5 of 12? Seriously? We're not talking about a 7-footer with baseball mitts for hands. This is a shooting guard. Baffling.

Javan Felix (4 points, 3 boards, 1 assist, 1 TO, 2 steals) -- We know who Javan is at this point, and who he isn't. So long as he's clear on that as well, he should have a solid senior season with a net-positive value contribution. I groaned when Felix watched a Husky score in transition without even contesting the lay up, but on the whole he closed out hard tonight and didn't snooze on the perimeter defensively.

Prince Ibeh (2 points, 8 boards, 1 block, 5 fouls) -- Ibeh continues to foul at a pace that guarantees a low ceiling on his minutes, which is a shame as he continues to become more and more productive with each minute he's on the floor. Get the fouling under control and you're looking at a player with the potential to deliver a hell of a lot of value in 20 minutes of action.

Texas gets a week to return from China and recover, before the home opener next Saturday against Texas A&M-Corpus Christi. The game serves as the opening round match up in the Battle 4 Atlantis tournament in the Bahamas over Thanksgiving, where Texas will have to share the beaches with Aggies, their first opponent in the tourney. Winner of the battle for Texas gets the winner of the battle for northwest Washington, as the Huskies and Zags are also scheduled for a first-round tussle. After tonight, I imagine Texas would like an opportunity to redeem themselves.

Wrapping this up, it was a weird, kind of hard-to-watch game -- particularly since we lost -- but... it was still a game. The season is upon us and the future looks bright. Not that any of this is as important as Jack Ma's profits, but still...